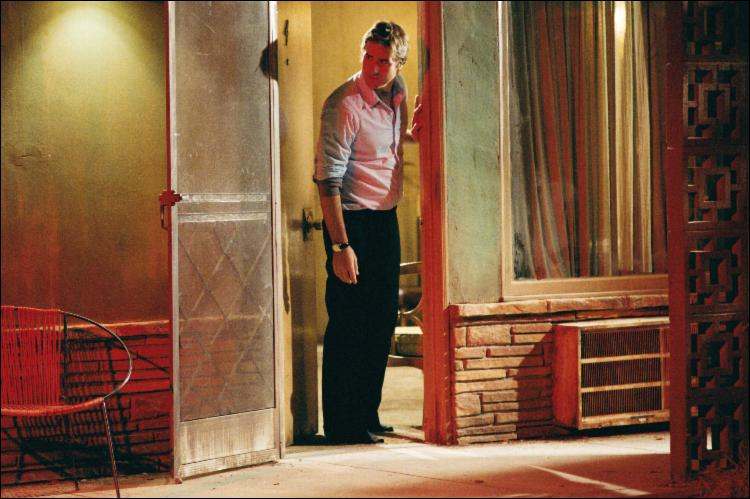 When their car breaks down on a deserted road, David and Amy Fox (Luke Wilson and Kate Beckinsale) have little choice but to make the best of it and spend the night at a shabby motel. With a beat up TV set and VCR their only entertainment, the watch a cheaply made slasher movie. As they watch the film they realize that it was shot in the very room they are staying! Little do they know that they are about to fight for their lives in “Vacancy.”

Director Nimrod Antal pays homage to Alfred Hitchcock, particularly “Psycho,” in the horror thriller that thrusts David and Amy into a precarious situation. Right from the start, with a score (by Paul Haslinger) that smacks of the works of the great Bernard Herrmann, we get the flavor of the horror master. The couple, about to get divorced after their young son died in an accident, is on their way to Amy’s parents home for an anniversary party. While she sleeps, David decides to take a short cut but nearly wrecks their car avoiding a raccoon in the road, causing some unknown damage to the engine. They come across a gas station in the middle of nowhere and are helped out by the owner. They drive off but, two miles down the road, the car really breaks down. They tromp back to the garage only to find it locked up tight, leaving them little choice but to take a room at the seedy Pinewood Motel. When they watch the movies left in the room and realize where they were filmed, the couple is startled by the ringing phone and pounding on the door. But no one is there. It dawns on them that they are in real danger and must escape or perish. Helmer Antal, working with a script by Mark L. Smith, establishes David and Amy as two average people pushed into an anything but an average situation. Once this is done, the director ratchets up the action as the hotel manager, Mason (Frank Whaley), and his two faceless cohorts terrorize the couple with the threat of violent death. It is up to the Foxes, though, to find a way out and to safety. Nothing unexpected really happens during the course of vacancy but the quality of the production, a fairly suspenseful script and decent acting make the 85 minute run time breeze by. Luke Wilson and Kate Beckinsale give depth to David and Amy as they fight for survival. Frank Whaley, as the head of his little snuff production company, has fun in his role. His masked cohorts are merely that, though creepy nonetheless. Production credits are decent with Haslinger’s score keeping pace with the suspense as the David and Amy fight for their lives. Camera work, by Andrsej Sekula, adds to the thrills with its varied viewpoints and tight composition. There are some genuine thrills in “Vacancy” that make it a decent bill of fare for the horror fans.