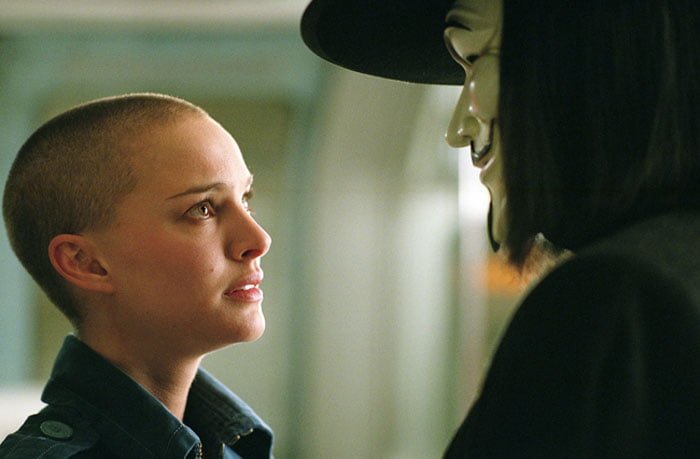 'Remember, remember The Fifth of November The gunpowder treason and plot...'

On her way to a date with British Television News producer Gordon Deitrich (Stephen Fry, "Tristram Shandy: A Cock and Bull Story"), Evey Hammond (Natalie Portman, "Closer") is cornered by two Fingermen eager to take advantage of the pretty woman's curfew violation. She's saved by a modern masked tribute to Guy Fawkes, the seventeenth century Catholic who plotted to end the tyranny of James I by blowing up Parliament. Evey is astonished when her rescuer takes her to witness his own spectacular demolition of the Old Bailey and explains that the destruction of a building can change the world. He is called "V for Vendetta." The Wachowskis are back and Rush Limbaugh will not be amused. Compared to the recent journalistic flap over the Denver, Colorado schoolteacher who compared George W. to Hitler in his high school social studies class, "V for Vendetta" is a hailstorm, a tornado, a firestorm of political accusations and ideas. Evey lives in a London of the near future and works for British Television News, whose own journalists understand that they do not create the news - their Government does. After the Bailey's destruction is fobbed off as an 'emergency demolition' with a sense of humor (V included fireworks and the '1812 Overture'), V retaliates by taking over BTN and broadcasting the truth along with his promise to return a year later on November 5 to blow up Parliament. When he's almost captured making his escape, Evey surprises herself by intervening. When she herself is injured, V takes her into involuntary custody rather than leave her to a dubious fate. Over the course of time Evey will find not only her fate but her history and her moral choices entwined with V's. Writer/producers Andy and Larry Wachowski ("The Matrix" series) may have given the directing reins over to their "Matrix" first assistant James McTeigue, but their fingerprints are all over this adaptation of the 1980's Alan Moore ("From Hell," "The League of Extraordinary Gentlemen") anti-Thatcherism graphic novel. They've not only connected V (the Roman numeral for 5, remember) with Evey, but created a ripple effect, where V's brazen terrorist activities and private rebellions are mirrored in the defiant satire sketch (which brilliantly weaves together The Sex Pistols and Benny Hill) of Evey's friend Gordon, who also has hidden secrets that would brand him a traitor and happens to make eggs in a basket just like V. Gordon's private hell is mirrored in the story of Valerie (Natasha Wightman, "Gosford Park"), a poetic heroine who also figures as a symbolic, connective link between V and Evey. And so on, and so on. Then, there's the political update in which America's drawn out war has already seen that country devolve into the chaos (Muslims, homosexuals, and deviants of other kinds!) that Britain's Government is working to prevent. Adam Sutler (John Hurt, 1984's "Nineteen Eighty-Four," "The Skeleton Key") is the very Hitler-like Chancellor, usually seen ranting on big screens just like the Big Brother who tormented his portrayer in "Nineteen Eighty-Four." Sutler's chief of police, Creedy (Tim Pigott-Smith, "Bloody Sunday," "Alexander"), who only lacks a monocle, 'black bags' subversive citizens in scenes that scream Abu Ghraib and connect Evey's past with her present. Chief Inspector Finch (Stephen Rea, "Breakfast on Pluto") is the Government agent on V's trail who begins to uncover disturbing connections among V's victims and his superiors. What do Lewis Prothero (Roger Allam, "Tristram Shandy: A Cock and Bull Story"), the policy ranting 'Voice of London' with a predilection for pharmaceuticals, and a city coroner, Delia Surridge (Sinéad Cusack, "I Capture the Castle") have in common? Could it be that a Government has harmed its own in order to grab power in a climate of fear? Provocative stuff, and a hero who is a bomber and a heroine wielding a London subway car full of explosives are going to catch a lot of flack, but they also beg the question - what is art? The Wachowskis have inverted our modern and recent history back at us like an Escher painting while searching for the line between violent terrorism and justifiable revolution. "V for Vendetta" is a more subversive call to arms than, say, "Good Night and Good Luck" because it also masquerades as an action flick, a piece of popular culture. Yet for all its incendiary ideas, "V for Vendetta" as a film lacks a bit of punch. Visually it feels small, even its climatic stand down between the military and a citizenry all outfitted in matching masks and some of the sidebars aren't well integrated, feeling more like sidetracking than a fully functioning piece of the whole. The cast is fine enough, but the love story that develops between V and his Evey isn't moving. It's some of the smaller supporting players, like Fry, who make the strongest impressions. Although Weaving has the additional obstacle of never actually being seen as V, Wightman's performance is also a narration and she makes more of it (although Weaving does a great job with an extended bit of alliteration of words beginning with - what else - the letter V). "V for Vendetta," with its images of holocausts and airborne viruses and denunciations of unlawful, lying leaders, is sure to become a much-debated flick. If only it's visceral impact were as strong as its intellectual one.