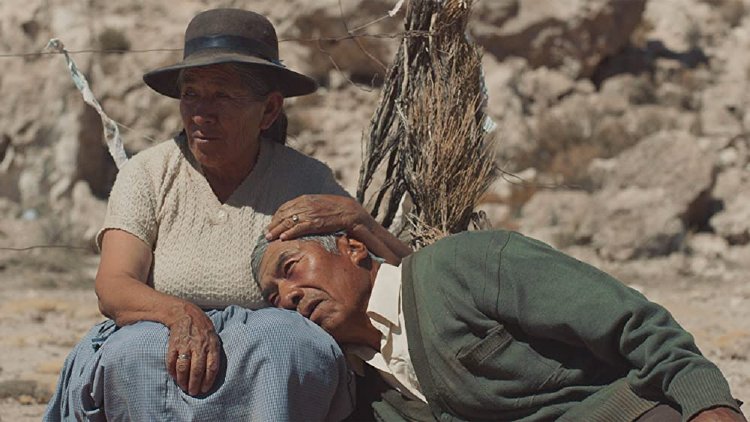 Virginio (José Calcina) and Sisa (Luisa Quispe) have spent their entire lives in the Bolivian highlands, living modestly with their herd of llamas.  Now, as a severe drought threatens their existence, their grandson Clever (Santos Choque) arrives to convince them to return with him to the city.  But Virginio, in particular, will not consider this, holding the young man who doesn’t know his Incan Quechua language in disdain as he fights for “Utama.”

Writer/director Alejandro Loayza Grisi's feature directorial debut addresses climate change from the POV of people with a spiritual connection to their environment whose culture is on the brink of disappearing.  The winner of the Sundance 2022 World Cinema Grand Jury Prize features stunning visuals from cinematographer Barbara Alvarez ("Whisky," "The Second Mother"), who accents the sun-baked isolation Virginio and Sisa have been eking their living from while also capturing the humor of their inquisitive flock with their shocking pink ear ribbons and the love expressed silently by two who’ve shared life for decades.

And so we are somewhat taken aback when Sisa, who we’ve just seen walk for miles and miles lugging pails of water after finding the village well dry, tells Virginio she needs help and he pushes back, telling her he has to graze their flock and procuring water is her job.  But there is something he is hiding and it will be his patient grandson who draws it out.

The Spanish speaking Clever tells Virginio that he doesn’t understand him and he is not only referencing their language differences.  While most of the villagers have already abandoned the area, Virginio keeps insisting that ‘the rain is coming,’ despite all evidence to the contrary.  He also shares heritage with the young man he regards a ‘spoiled brat,’ telling him that the sacred condor folds its wings back and drops down upon the rocks when it is no longer useful, but that this is part of a cycle.  Later, Clever will accompany Virginio with the group that heads up the mountain to ‘sow for water’ with a sacrifice.  In one of Alvarez’s arresting shots, Virginio is centered in front of the brown peak that used to be snow capped and whispers to himself ‘You are dying.’

In the press notes, Grisi notes that this area so close to his home town of La Paz is one of the first great victims of climate change.  His film is like a south of the equator response to Milko Lazarov’s 2018 "Ága," another film about an elderly couple grappling with climate change and their dying culture in the northern reaches of Siberia.  Someone should pair these up as a double bill.

In the remote highlands of Bolivia, an elderly husband and wife have bent their backs to work the land and tend their llama flock for many years. Now, though, he is in poor health and the land is locked in a long drought that threatens them and their very existence in “Utama.”

This quiet little slice of life story introduces us to Virginio (Jose Calcina) and Sisa (Luisa Quispe), the elderly couple trying to eke out a life raising their llama flock during a severe drought that has lasted over a year. Virginio must range farther and farther away from home to graze and water his flock. Siso has the same problem just trying to get water, an increasingly sparse resource.

“Utama” is a clash of the old and the new as the elderly couple struggle to survive. They are visited by their grandson, Clever (Santos Choque), who is trying to end the long time estrangement of his father, in the city, and his granddad. His aim is to have them move to the city to protect them but they are unwilling to give up the only life they have known.
There is a quiet desperation for the old couple as they refuse to abandon the land but, every day, realize they are fighting a losing battle with an angry Mother Nature. It is a harsh message to take and writer-director Alejandro Loayza Grisi pulls no punches in his statement of facts.

What we have here is an indictment on the worsening climate change crisis that the G20 members (the most prosperous countries in the world) are directly responsible for, producing 80% of the greenhouse gasses being spewed into our atmosphere. Unfortunately, this slice of life story is becoming the norm rather than the exception in our real life world apocalypse.