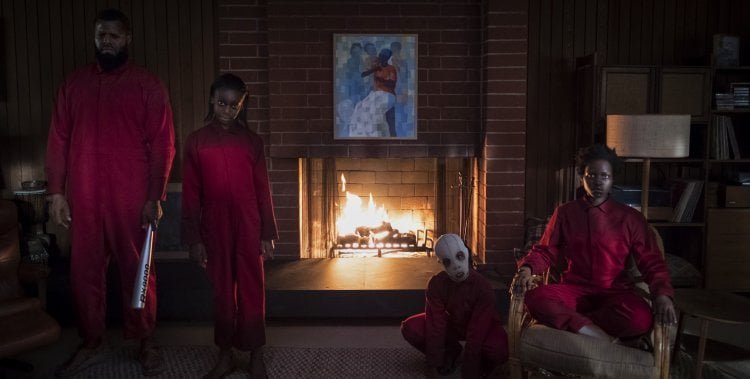 Gabe (Winston Duke) and Adelaide Wilson (Lupita Nyong’o) have brought their kids Zora (Shahadi Wright Joseph) and Jason (Evan Alex) for a dream vacation on the northern California coast. But something is gnawing at Adelaide, some sense of impending doom, as they stay at her childhood Santa Cruz home. One night a family appear in their driveway, a weird and unsettling experience that becomes terrifying when the Wilsons realize they are being visited by their doppelgängers in writer/director Jordan Peele’s (“Get Out”) “Us.”

There are many things to admire in Jordan Peele’s latest film. Lupita Nyong’o and Elizabeth Moss’s dual performances both hit the mark as vastly different mothers and their wildly eerie counterparts. The use of music, from soundtrack selections like Luniz’s ‘I Got Five On It,’ the Beach Boys’ ‘Good Vibrations’ and NWA’s ‘F%&* the Police’ to Michael Abels’ (“Get Out”) unsettling score, is exemplary. Subtle makeup adds a demonic cast to Zora’s double. Peele’s direction milks every scene for suspense, his use of mirrors reflecting back to Addy’s horrifying childhood funhouse experience. But this satire of the American dream, where those who get left behind simmer in murderous resentment, resembles one of those unwieldy Stephen King novels like “The Tommyknockers” or “Insomnia” where a good concept unravels and goes off the rails. Too many of Peele’s ideas are tenuously connected to his overall theme. Why, for example, is there a “Jaws” homage in a film that has little to do with it? The film begins with a title card informing us that there are thousands of miles of tunnels beneath the United States, a wall of rabbits in small cages, then a 1986 set prologue. Young Abby is at the Santa Cruz boardwalk amusement park where her father asks her which prize she would like. The girl, holding a perfect candy apple stiffly in front of her, chooses a Michael Jackson Thriller t-shirt. She then wanders off toward the beach, passing a man holding a sign reading ‘Jeremiah 11:11’ (shades of Alan Ball’s short-lived HBO series, “Here and Now”). Waves crash onto the sand ominously in the night. Shaman’s Vision Quest beckons and Abby enters. The lights go out. Abby’s breathing quickens and she heads for a red exit sign, but it is just a reflection. She turns around to see the back of another young girl that looks exactly like her... In the present day, Abby is a protective mom who is feeling increasingly jittery, especially when Gabe proposes a day at the beach with their friends the Tylers. She reluctantly agrees. Weird coincidences begin to pile up, their approach to the beach interrupted by an ambulance taking away an old man holding a Jeremiah 11:11 sign. That night, while Gabe grouses about Josh Tyler’s (Tim Heidecker) material one upmanships, Abby breaks down, giving voice to her dread. Jason interrupts to tell them there is a family standing in their driveway. Most of the film is comprised of the Wilsons trying to kill their shadow selves before their shadow selves kill them. These strange creatures wear red jumpsuits, carry scissors and howl like the pod people in the 1978 “Invasion of the Body Snatchers.” Only Addy’s double speaks, but with a halting, strangled, scratchy voice. Over at the Tylers, Kitty (Moss) complains about a noise outside. They and their twin teenagers Becca and Lindsey (Cali and Noelle Sheldon) aren’t as lucky as the Wilsons which the Wilsons soon discover when they bang on their door for help. These series of doppelgänger home invasions are inventively staged by Peele and eerily shot by Mike Gioulakis, but begin to grow repetitive, especially when those presumed dead have a second life. As the Wilsons go on the run, we see the impact is widespread (shades of “The Birds”), corpses scattered everywhere as their doubles begin to form a human chain (inspired by something we’ve seen referenced in 1986 which also explains the red jumpsuits). But while we can intuit the reason for all the rabbits and ballet dancing, Peele’s use of them is too abstract, his ‘Tethered’ concept not clean enough. A closing ‘twist,’ which can be guessed from the get-go, may at first seem illogical, but although it makes sense in Peele’s scheme of things it also feels like a method to leave the door open for a sequel. “Us” is sure to be enthusiastically debated, but while some films welcome repeated viewings to delve into their mysteries, too many of this one’s are just too untethered for its own good. Grade: