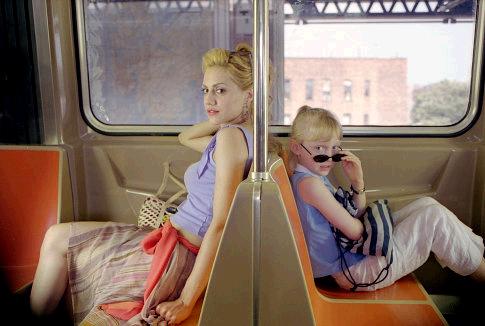 On her 22nd birthday, orphaned daughter of rock star Tommy Gunn, Molly (Brittany Murphy, "Just Married") attends a party in her honor in her perfect, responsibility free world. She meets 8 year old Ray Schleine (Dakota Fanning, "I Am Sam"), a germaphobic mini-tyrant whom mom, A&R exec Roma (Heather Locklear, TV's "Melrose Place"), has little time for. When Molly's lawyer informs her that her financial manager has absconded with all her millions, her friend Huey (Donald Adeosun Faison, TV's "Scrubs"), a producer who works with Roma, hooks her up with a job as Ray's nanny in "Uptown Girls."

Brittany Murphy, who showed such early comic promise in "Clueless," "Trixie," "Riding in Cars With Boys" and as the voice of Luanne on TV's "King of the Hill" is quickly wearing out her welcome playing up her kewpie doll characteristics in throwaway fluff like this and "Just Married." Screenwriters Julia Dahl, Mo Ogrodnik and Lisa Davidowitz were hired to bring Allison Jacobs's story idea to the screen and they have created a superficially naive and needy character who would have driven away the unrealistic friends that they give her. Just when they get down to the 'old person taught to be adult by young person taught to be child' cliches, though, Murphy regains some credibility reacting to the sad parallels of Ray Schleine's difficult, more well defined, background. Molly lives in an old NYC apartment with her pet pig ('Moo means pork in Thai and he was going to be my curry dinner one night in Bangkok but we fell in love') attending to nothing but her social calendar and a shrine of her father's guitars. She declares Neal (Australian newcomer Jesse Spencer), a fluffy pop artist who performs at her birthday, the new Lizard King. Neal is a recovering alcoholic who is not supposed to be engaging in new romantic relationships, but Molly lures him into her bed by tempting him with dad's memorabilia. Her best friend Ingrid (Marley Shelton, "Bubble Boy"), or 'Ing' as Molly calls her, gets Molly a job at Henri Bendel where she promptly buys Neal $1,300 900 count Egyptian cotton sheets (she's broke remember) and gets fired. Neal breaks off the obsessive relationship to refocus on his work (he writes a song about his sheets - no kidding!) and Molly ends up sharing an apartment with the buttoned-up Ingrid, a woman who would never exist in Molly's rock 'n' roll world. Ray is horrified to meet her new nanny, who tries to inject some fun into the ultra-disciplined little girl's life. After an attempt at a tea party fails ("You just got your scurvy drool all over my plastic scone you freako!"), Molly promises to take Ray to Coney Island to 'ride the spinning teacups until you puke.' Molly also learns that the bedridden coma patient in Ray's apartment is her dad and promises that he will be more likely to hang onto life if Ray talks to him. Ray begins to warm up, even accepting Moo as a pretty clean pet. Both the trip and Molly's promise fail, but the teacups are a symbol which link the two orphaned little girls. Director Boaz Yakin ("Remember the Titans," "A Price Above Rubies") begins his film by making his entire cast, save Faison's Huey, unlikable. Murphy is grating, Fanning severe, Shelton plastic and Spencer opaque. Locklear is cold and distant, but that is befitting her character. Murphy and Fanning warm up when the boxing gloves come off, but Yakin wraps the film with the worst type of stylized Hollywood excess, a grotesque ballet performance where Fanning is forced to act like Molly with a grin plastered across her face accompanied by 'reformed' sellout Neal. Art Director Frank White ("Swimfan") contrasts Molly's gloomy rock den with an almost antiseptic modern apartment for the Schleines while costumer Sarah Edwards ("Igby Goes Down") outfits Fanning in pert ballet costumes and severe school uniforms and Murphy in floaty, see-through dresses and spike heels. Just why this production called for a cinematographer of Michael Ballhaus's ("Gangs of New York") caliber is anybody's guess. "Uptown Girls" is obvious, pandering, prat-falling silliness that gets about a 20% return on its talent investment. These girls need to "Say Goodbye to Hollywood" and get in a "New York State of Mind." Thank God for the pig, who is delightful throughout. D+ Robin: Robin did not review this film.