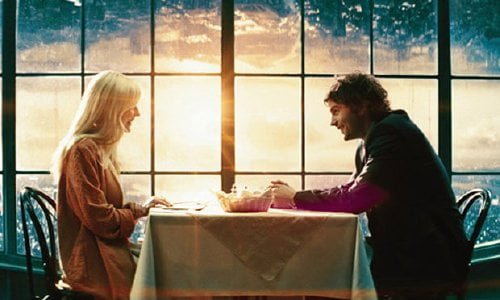 Adam and Eden met as children and their friendship continued in their adolescent years, but they never met face to face, The problem is that each is an inhabitant of a twin worl whose gravities are opposite to each other. That does not stop young love, though, when they turn things “Upside Down.”

As a young boy Adam climbed to the top of Sage Mountain where his below world almost touches the peak of its parallel on a parallel world up above. He meets Eden looking down at him and the youngsters begin a forbidden relationship, Adam pulling Eden from her own gravity into his. But they're discovered and he believes she's been killed. 10 years later, Adam (Jim Sturgess, "One Day") sees Eden (Kirsten Dunst) on TV where she is identified as an employee of Transworld, the mega-corporation which connects the two worlds, exploiting one for the benefit of the other. Adam wrangles a job there, but in order to see Eden he has to combat his own gravity "Upside Down." Writer/director Juan Solanas has come up with a science fiction concept and figured out the technical challenges to visualize it, but "Upside Down" is special effects in search of a story. There is no palpable passion between Adam and Eden (Shouldn't that be Purgatory and Eden or Adam and Eve? Or better yet, neither?) and the convolutions Solanas goes through to further his plot are ludicrous. The technical team behind "Upside Down" has done its job pretty well (the film resembles a 1990's work from Caro/Jeunet), but they've created an elaborate frame for a dull doodle. Adam pitches his invention, a gravity-defying face cream using a family secret, to Transworld CEO Lagavullan (James Kidnie) in order to secure a Transworld position. We have learned previously that Aunt Betty shared her knowledge of pink pollen from pink bees with Adam when she made him floating pancakes. Just accept that this stuff exists, only Adam seems to know about it, it apes the gravity of the 'Have" world, and he decided to devote years to creating a facial cream with it. He does this in an industrial warehouse lab under Albert (Blu Mankuma, "2012"), a seeming activist type who nonetheless supports Adam's work. The whole 'Have" world above exploited 'Have-Not' world connected by a manmade structure is so similar to "Total Recall's," Adam is screened with a full body x-ray scanner entering Transworld. He's hazed by his coworkers, then befriended by a suspiciously friendly above worker, Bob Boruchowitz (Timothy Spall, "Harry Potter's" Wormtail). Bob turns out to be legit as he's publicly canned soon thereafter, but leaves Adam a parting gift - his ID badge with the security resources to gain access to Eden several floors above. "Upside Down" is one big horizontal split screen effect, most notably within Transworld where cubicled workers exist both right side up and upside down. A lot of attention has gone into details of gravity (each world's residents retain their own gravitational pull wherever they are), including a chandelier built upside down in the film's Cafe dos Mundos. Of course, the obviously named Cafe makes no sense as we're told many times that commingling between the two worlds is discouraged, just as when Adam presents his facial cream to an executive board, it's been named Gravity. Shouldn't it be called Anti-Gravity? The whole concept of anti-matter, a method of 'balancing' in one's opposite world, is shoddy (it begins to burn up after a specified time, but one can just splash water around) and Eden's 'post teenaged accident' amnesia is a tired obstacle to the romance. Sturgess is an appealing young actor and he evokes some amount of rooting interest, but the motions he's forced to go through are just too absurd. Dunst is mostly intangible object, the filmmakers congratulating themselves on having her repeat her upside-down "Spider-Man" kiss (she really doesn't, she's sideways when it happens, perpendicular to Sturgess) and never has Timothy Spall's acting been so artificial. Magical realism has a strong genesis in Latin American countries, but although Argentinean Solanas (son of Fernando E. Solanas, "Sur") can create visuals to support the genre, he needs a better foundation to build from. "Upside Down" may be a treat for the eyes, but you'll probably be rolling them throughout most of its running time.

Ryan Bingham (George Clooney) has the ideal job. He flies around the country, from one city to the next, to perform his necessary work as a corporate downsizer. The perks of his traveling – over 300 days a year – are close to earning him his most desired prize: 10 million frequent flyer miles. High technology and cost cutting, however, may jeopardize Ryan’s staying “Up in the Air.” This is a sure fire hit for the holiday season with Jason Reitman (“Juno”) manning the helm of this George Clooney rom-com vehicle. As expected, Clooney is his usual charming, smiling self more in the vein of his movie star persona than his grittier character roles, as in “Syriana.” Ryan is a solitary soul who takes seriously his job as the outsourced corporate hatchet man that breaks the bad news to the poor folk who have lost their jobs. He greets their “What am I going to do now?” pleas with consolation and compassion, taking pride in his “personal touch.” It does not hurt that he is racking up all the travel perks – sky miles, hotel miles, priority booking, VIP lounges, rental car upgrades and the rest – and is well along in attaining his goal. A wrench is about to be thrown into the works, though, when Ryan is told by his boss, Craig (Jason Bateman), that his traveling days are numbered and that teleconferencing to fire people is the wave of the future. The hatchet man is appalled with the idea of removing the personal touch from his job. He is further distressed when he is assigned high-tech go-getter Natalie Keener (Anna Kendrick) to tutor her in the letting-people-go process. Meanwhile, he develops an on again off again romance with fellow traveler Alex Goran (Vera Farmiga). “Up in the Air: has been getting a lot of awards buzz but, aside from a wonderfully charming performance by Anna Kendrick, this is a mainly good meat-and-potatoes kind of movie. It is entertaining throughout but does not attain the greatness of the hype. Clooney’s dazzling smile gives Ryan more wattage than the character should have had but the actor gives a solid performance that has a note of inner emptiness. Vera Farmiga as Ryan’s love interest gets a nice arc of character that gives the ending a melancholy finish. Kendrick is my choice for best supporting actress. Techs are first-class across the board. Cinematographer Eric Steelberg captures the look of traveling as one of the privileged few as Ryan bypasses all obstacles with a flash of the appropriate card. As he flies from one small city to the next, plying his trade, crisp aerial footage of each burg offers a travelogue of America. Anyone who has traveled for work, especially across the country’s heartland, will appreciate the view. Brisk editing, by Dana E Glauberman, gives the film a good pace, making the pampered rigors of Ryan’s travel inviting. “Up in the Air” is a good holiday movie and intelligent filmmaking.