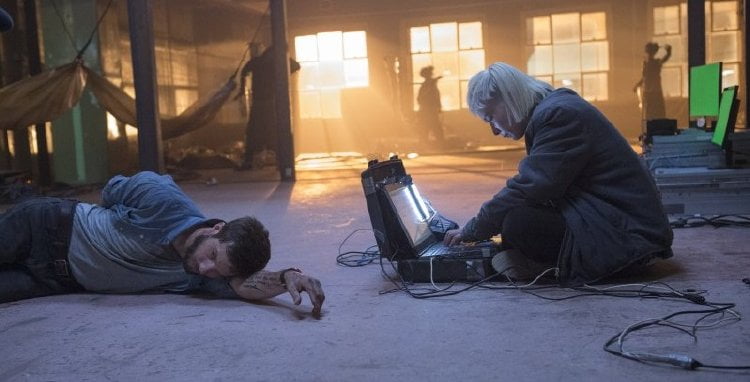 Grey Trace (Logan Marshall-Green) is an old school, low tech mechanic in a high tech world and is happy being so. He sells his rebuilt cars to wealthy patrons and takes his corporate exec wife. Asha (Melanie Vallejo), with him to deliver a finished product to billionaire recluse Eron Keene in “Upgrade.”

On the way home, their autonomous car malfunctions and crashes. A car stops and four men get out. They drag the victims from the wreck but, instead of helping them, they shoot Asha, wounding her mortally. They shoot Grey, too, but not fatally. Instead, he is paralyzed from the neck down. His mom takes care of her quadriplegic son but he is wrought with despair about his life and, especially, his great loss of Asha. Desperate for release from his tortured life, he orders his medical computer to give him an overdose, but the robot refuses. Instead, he ends up in the hospital and is visited by Eron, who offers him a secret deal. Keene’s technicians will install a very special microchip on Grey’s spine. That chip, called STEM, gives Trace the mobility he once had, and more. Together, Grey and STEM set off to find Asha’s killers and bring justice and closure. Without giving anything away, that is the path that “Upgrade” takes. The first thing that hit me when STEM first speaks, in Grey’s head and to no-one else, was the 1982 hit TV series, “Knight Rider,” starring David Hasselhoff and his indestructible super car, KITT. I never saw the show but know it is about a man-and-his-car crime fighting team. “Upgrade” combines man and machine into one package with the mission to bring Asha’s killers to justice. STEM is an integral, nay, necessary, part to the mission. This is actor-turned-director Leigh Whannell second time at bat, his first helmer was “Insidious: Chapter 3 (2015), and does a fair job in telling a sci-fi yarn on a smaller budget. It looks a bit cheesy at times and is not high art but it strikes a chord with the kid that thrived on pulp science fiction when a much younger me. “Upgrade” does not try to intellectualize on the pitfalls of technology, though it does raise the ongoing concern that in the battle between man and machine, we lose. For me, it was 96-minutes to shut off the serious day-to-day world machinations (Iran deal, anyone?) and get a story that, heck, I like.