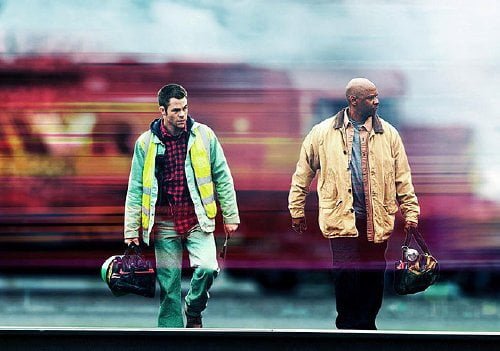 Human error sets the wheels in motion as a train, half a mile long and hauling carloads of toxic chemicals, is left unmanned with the throttle engaged. At first, railroad yard manager Connie (Rosario Dawson) thinks it is an idle “coaster” but soon learns it is under full power and heading for a city of 720000 million souls. Engineer Frank (Denzel Washington) and conductor Will (Chris Pine) take after the runaway train to try to stop what may well be “Unstoppable.”

Frank Barnes (Denzel Washington) is one of many railroad union vets whose jobs are being threatened by younger, cheaper workers, so he's not particularly welcoming when he learns he's to mentor new conductor Will Colson (Chris Pine, 2009's "Star Trek"). In fact, Will has a second strike against him as the Colson family is a powerful one and his hiring smacks of nepotism. Both will form new opinions of the other, though, by how they react to the news that their track has an unmanned twenty-two car train traveling in their direction at full speed. It just might be "Unstoppable." It may seem like director Tony Scott ("True Romance, Enemy of the State") is repeating himself by following up his Denzel Washington remake of "The Taking of Pelham 1 2 3" with another tale of a speeding train with the same star, but the films are very different. "Unstoppable," written by Mark Bomback ("Live Free or Die Hard," "Race to Witch Mountain"), is a disaster suspenser by way of buddy road trip made current with a dash of social economics. Refreshingly, Scott uses little of the digital visual trickery, rapid-fire editing and washed out colors that became mostly de rigeur beginning with 1996's "The Fan," so when he slows his runaway almost to a freeze frame only to punch it back into regular speed, it's all the more effective. As Barnes grudgingly takes on Colson, Scott shows us the genesis of his disaster (based on a real-life incident in Ohio in 2001). Dewey's (Ethan Suplee, TV's 'My Name Is Earl') getting behind schedule piloting his 1/2 mile train out of the yard when he's faced with stopping it to switch tracks. Against protocol, he hops out while his train's still running and it gets away from him - without the air breaks connected and at full speed. When yard manager Connie (Rosario Dawson, "Grindhouse," "Seven Pounds") hears about the incident, she's horrified but at first thinks she has coaster, a far more controllable incident. By the time she learns what's really happening on her watch, she's been joined by a Federal Inspector (Kevin Corrigan, "The Departed," "Pineapple Express"), there to do a presentation for the kid's safety course that almost got obliterated on the runaway train's track! "Unstoppable" can be a bit of a groaner like this in its initial stretch - I was waiting for Scott to push a baby carriage onto his tracks - but once it settles in, it's an economical (95 minutes!) pulse pounder with two nicely rounded characters getting to know one another. Chris Pine's shed the surfer frat boy image with a little stubble and a new maturity that moves him assuredly out of the Paul Walker pool. By this time, Washington should be able to do Scott films in his sleep, but he puts the effort in - Frank Barnes is his most enjoyable performances in years. A surprising standout is Lew Temple ("The Devil's Rejects") as Ned, an employee Connie thinks of as a shirker who comes through when the chips are down. Dawson is really committed here, making her desk post exciting. Kevin Dunn ("Transformers") is the cliched idiot boss's boss, the one who puts profits over safety just like the mayor in "Jaws." Corrigan, an actor whose inclusion in a cast I usually appreciate, seems out of place here. Bomback does a nice job with his protagonist's back stories - Barnes is a widower with two smart, beautiful daughters who work at Hooter's and give him playful 'tude while Colson's had a restraining order placed on him by his wife and is facing a hearing for a jealous overreaction. A rookie mistake of Colson's is nicely played off Barnes's experience later. As the time ticks down to 777's certain derailing on elevated track in Stanton, the men's personal stories also come to their climaxes after they decide to chase it down. Scott's direction is lean, his timing tight and "Unstoppable" is his best film in over a decade.

Director Tony Scott is on a roll with his train thrillers. Last year, he remade that classic 1974 heist flick, “The Taking of Pelham One Two Three,” to mixed results. Second time is the charm and “Unstoppable” is a start to finish actioner that keeps the film’s adrenalin a-pumpin’ for an exciting 100 minutes. Based on a real runaway train incident, writer Mark Bomback ramps up the action, making the train “a missile the size of the Empire State building” packing toxic waste and rolling at 75mph. Early on, we learn that the runaway is heading for Stanton PA where a sharp curve will surely derail the fast moving freight train. Enter Frank and Will, the former facing forced retirement and the latter a rookie to the locomotion business who has to prove himself to the veteran engineer. These Everymen, two working class schmucks, learn of the runaway 777 and go to heroic lengths to help avoid a disaster. These guys, and their boss Connie, have to put their minds together, with Frank and Will providing the muscle, to catch and stop the hurtling train. Helmer Scott and his terrific team, in front of and behind the camera, use every possible action premise that involve trains. They even hit you with a trainload of kids on a collision course with the unmanned missile. They fooled me into thinking that this would be the disaster of the film. It is just a maguffin. The real action is yet to come and it is a doozy. Denzel Washington and Chris Pine have good chemistry together. It is just another day working on the railroad and the newly teamed trainsmen are from different worlds. As the day turns into anything but average, Frank and Will, facing death, become one in their frantic chase of the 777. The actors effectively make the viewer bond with our heroes because they are one of us. Rosario Dawson takes on the tough role, usually reserved for a male actor, as the strong-willed, smart yard master who has to muster her forces to avert disaster. She, too, is an empathetic character that rings true. Supporting cast is full dimension with Kevin Dunn as the railroad VP who makes matters worse; Kevin Corrigan is a good addition as railroad investigator Scott Werner who provides sage advice when it is most needed; Lew Temple, as welder Ned, provides the almost comic relief as he leads the charge of police to keep the public safe; Ethan Supplee has the unenviable role as Dewey, the guy who set the 777’s wheels in motion. Techs are spot on at every level. The sound team uses the jarring train on track noise, metal on metal, the scream of the brakes and the roar of the giant diesel engines to good effect. Cinematographer Ben Seresin captures the chase action from every angle possible and, with editors Robert Duffy and Chris Lebenzon, keeps the excitement flowing like a raging river. Production design, art direction, costume, et al, deserves kudos. “Unstoppable” is an intelligent film that provides the right mix of action, humor, drama and fine acting. As the holiday season draws near, people go to the theater more and now they have something to look forward to.