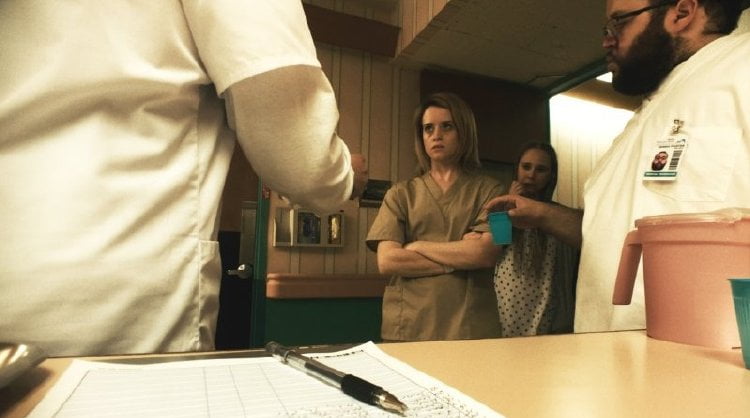 Still traumatized after moving from Boston to Philadelphia to escape a stalker, Sawyer Valentini (Claire Foy, "Breathe") visits Highland Creek Behavioral Center for a follow-up therapy session. But she unwittingly signs a self-commitment document then becomes frantic when she recognizes her stalker David Strine as facility staffer George Shaw (Joshua Leonard, "Humpday"). Of course no one believes her in "Unsane."

Cowriter (with James Greer, "The Spy Next Door")/director Steven Soderbergh's latest stealth release is a high quality refresh of drive-in B pictures set in psych wards (think "Don't Look in the Basement" or "Disturbed") and it is a lot of depraved fun. Soderbergh shot on iPhone 7 Plus (with 4K resolution plus the FiLMiC Pro app and a Steadicam handle) using a wide angle lens for disorienting effect, a great choice for this material, not only plunging us into Sawyer's hellish experience but always keeping us somewhat off kilter. The film's casting is brilliant, its combination of A list stars (including a very amusing uncredited one), Indie and television actors meshing in the most delightful ways, Foy fully invested in the trashy genre while players like "Cremaster 3's" Aimée Mullins add fringe flourishes as Highland Creek's stonewalling administrator. The film begins with an eerie day-for-night shot of the woods, light peaking through the trees giving the effect of animated ground cover, as Sawyer's stalker talks about how he first saw her in a blue dress. The young woman we meet has a dark, raw vibe, castigating a bank customer over the phone for questioning her analysis. In the next cube, coworker Jill (Sarah Stiles, TV's 'Get Shorty') reacts with amused dismay. Sawyer eludes her boss's suggestive overtures, then meets a stranger at a bar after work, telling him he'll 'get everything he wants' if he agrees to never contact her again. But once inside her apartment, his kiss sends her into a fetal position in her bathroom. Sawyer is clearly not OK and recognizing this, she heads to speak to a counseler during her lunch hour the next day. Everything seems normal until an audience red flag goes up when the counseler twists Sawyer's words into contemplation of suicide. Asked to complete a sheaf of 'standard' forms, Sawyer asks if there is anything in the fine print she should be aware of, but is assured she should just sign them. Trying to make a followup appointment on the way out, she's asked to wait. A nurse, Dennis (Zach Cherry), asks her to follow him, then demands to check her purse. Sawyer's suspicious and anxious to get back to work, but complies. Then Nurse Boles (Polly McKie) arrives and locks the door. This set up is all too easy to believe, but after Sawyer's advised she's committed herself for 24 hours observation and led into an open coed ward, we begin to questions things again. Rightly so, as it turns out, but not because of lazy scripting. Sawyer's tormented by patient Violet (Juno Temple), but befriended by Nate (Jay Pharoah, 'SNL') who she's observed talking on a forbidden cell beneath his sheets. He gives her the lay of the land, but Sawyer cannot help but react to Violet's aggression and Shaw's presence, labeling her dangerous and landing her in restraints. Is Sawyer imagining things or is her stalker really there? Soderbergh lays subtle minefields during conversations between Sawyer and her mother Angela (Amy Irving), but things go from bad to worse once Angela arrives on the scene to help her daughter. The film's final act ups the ante and the violence before capping with a 'six months later' epilogue that will leave us questioning things once more. Soderbergh's dipped his toe into the paranoid thriller genre before with "Side Effects," but that film fell apart. "Unsane" is a more lurid outing and while it treads familiar ground, its top notch craftsmanship and intense, jagged Foy performance make for a satisfying thrill ride. Grade: