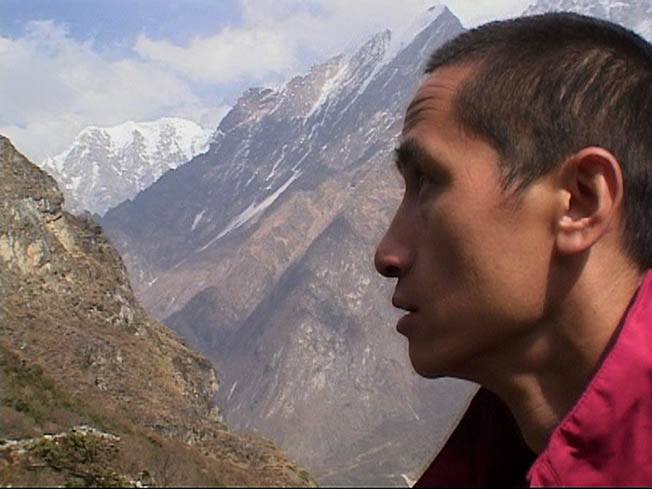 In 2001, after the great Lama Konchong died at the age of 84, post-cremation signs indicated he would likely return, reincarnated as a child. Tenzin Zopa, the Lama's shy disciple of twenty-one years, since the age of 7, was surprised when the Dalai Lama picked him to find the child as Zopa had not yet achieved the enlightment that would make him a Buddha. Nonetheless, with the aid of some astrological readings, Zopa set out on a four year journey through the Himalayas of Nepal into the Tsum Valley to find that "Unmistaken Child."

Israeli television documentarian Nati Baratz found his subject when he heard Tenzin speak about his beloved master at the Kopan Monastery. With permission obtained from the Lama Zopa Rinpoche (the designation 'Rinpoche' after a Lama's name indicates he is a reincarnation of a previous Lama), Baratz spent four years with Tenzin Zopa without knowing whether Tenzin would succeed in his quest. What he has documented is not only features incredibly stunning landscapes and the charming company of Tenzin, but a remarkable spiritual event that continually surprises. After having been warned not to listen to stories from the locals, which could lead to a mistaken child, Tenzin helicopters in to the Tsum Valley where he is greeted with much spectacle for such a remote location. He then sets out on foot, inquiring into the presence of children aged one to one and a half years. He offers candies, asks their father's name (predicted to begin with an 'A,' just as the letters TS indicated the child would be found in Konchong's birthplace) and observes their reactions to his master's rosary. Their are magical moments along the way, such as Tenzin telling Baratz how a particular place will look in the summer when blue flowers bloom and the bamboo trees become 'windy' and 'dance.' When Tenzin arrives at his birthplace, Chekampor Village, the first people he comes across are relatives and an aunt tells him of a child in the next village whose father is named Ahpe. Tenzin visits Genshe-La's retreat, where he had presented himself at the age of 7 against his father's wishes, and breaks down in tears that the once beautiful place has fallen into disrepair. Then we meet the child who waters an apple tree planted by Konchong daily and who refuses to give Tenzin the master's rosary back. What follows is miraculous. The child is taken to a monastery where he is tested by Lama's. Six times, when presented with multiple items (bells, boxes, etc.), one of which was used by Konchong, the right one is picked. The child is recognized by the Dalai Lama as the reincarnation of Konchong, and in an elaborate ceremony, is renamed Tenzin Phuntsok. What happens afterwards, particularly the new Lama's drive up winding roads thronged with people towards his monastery (set to beautiful music which accentuates the spirituality of the scene) and the fortitude the toddler shows through hours and hours of reception is even more amazing. Camerawork is handheld and favors close-ups sometimes to the detriment of the landscape, but getting to know the twenty-eight year-old monk Tenzin is one of the film's chief attractions. How he handles the child is positively joyous, through tantrums (the little one objects severely to having his head shaved) and toys (Tenzin is delighted when the boy is enraptured with a toy helicopter a subject presents). The filmmakers also chose to subtitle the film, even when Tenzin speaks perfectly clear English (with charming constructs, such is 'this is the most shaking day of my life'). Tenzin's actions are not without discipline, but the Buddhist principles cloak everything in a patient kindness. The shy Tenzin has transformed by the time he must negotiate with the child's parents. He tells them why they should let their youngest go and that he believes they should let him go, but in the end they are asked if they will let him go. The strength of faith among these people is palpable. Following closely on the heels of "Burma VJ," where we also observe Buddhist monks, "Unmistaken Child" is a testament to these great and loving souls and the film not only delights, but moves one with its spirituality. Baratz's work may not be the slickest, but he took a risk and followed through under arduous conditions to let an audience share in a mystical journey. The film itself is an act of faith.