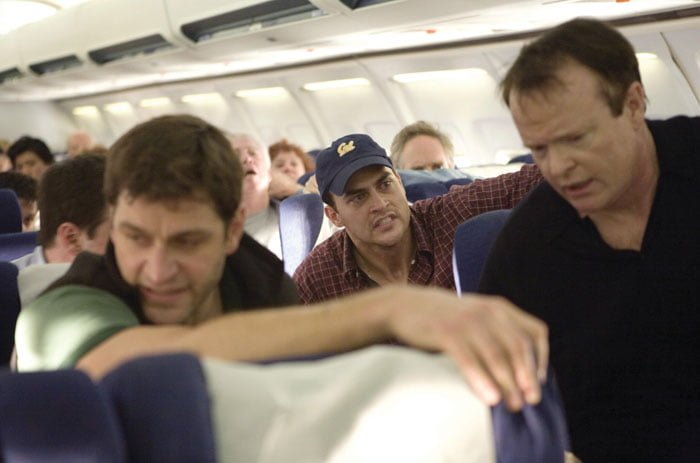 September 11, 2001. Four commercial airliners were hijacked by terrorists to be used as weapons against the United States. Only one didn't reach its intended target - "United 93."

Writer/director Paul Greengrass ("The Bourne Supremacy") has wormed his audience's way into the midst of human tragedy before with "Bloody Sunday," his recounting of the 1972 massacre of Derry protestors by British troops. "United 93" gets similar treatment, yet doesn't have the impact of the earlier film. While it cannot help but have extremely effective moments given its subject matter, the first film to tackle 9/11 plays more like a quality television reenactment than a cinematic docudrama. Greengrass is most effective in how he injects the mundane with profundity. As the four terrorists, all distinctly different and separate characters, prepare in their hotel room with various levels of conviction and dread, the day to day operations of an airline's preparation for a flight now looks like the construction of a missile guided bomb. The director and his editors Clare Douglas ("Bloody Sunday") and Christopher Rouse ("The Bourne Supremacy") then balance their film by switching between the air traffic control centers that first witness the day's events unfold - Boston, New Jersey and Cincinnati, along with the FAA in Hernon, VA, whose operations manager, Ben Sliney, was literally starting his first day after a job promotion and who plays himself in the film. The suspected hijacking of AA 11 is reported by a Logan airport controller who hears someone speaking in a foreign language over his headset. Initially, this report is treated with a bit of skepticism, but when CNN reports that a 'small plane' has hit one of the towers, Sliney calls for on site military and the NorthEast Air Defense Sector interrupts its planned simulation training to monitor a real life emergency. It is not until the film's forty-five minute mark that Greengrass begins to fold in the experience of being onboard United's flight 93. A few of the most unnamed characters stand out. Lewis Alsamari as the tentative hijacking leader, Saeed Al Ghamdi, puts a human face on the Muslim extremists (his "Ich liebe dich" over his cell phone at the airline gate reminds us that this was the terrorist in love with a beautiful German girlfriend - his story was fictionalized by another British director, Antonia Bird, in "The Hamburg Cell"). Christian Clemenson ("Mighty Joe Young," "Lost & Found") is Thomas E. Burnett, Jr., the United passenger who the actor shows controlling his fear by taking action, organizing the resistance initiated by Todd Beamer's (David Alan Basche, "War of the Worlds") understated 'Let's roll." Trish Gates exemplifies a stewardess bravely remembering her training even while the horrific events playing out make her break down in tears. Patrick St. Esprit gives us the picture of frustration as the N.E.A.D.S military officer who cannot believe he cannot get two jets from Otis AFB into Manhattan air space in time. Cinematography by Ken Loach regular Barry Ackroyd ("Sweet Sixteen," "Ae Fond Kiss") is of the shaky, handheld variety and while the film doesn't look special in any way, even the lighting underscores the irony of just how beautiful the weather was on that Tuesday. The plane's interior is bathed in the unnaturally white light that only seems to exist at sunny altitudes. with all due respect to the families and friends who lost love ones on that day, watching "United 93" was not quite the gut wrenching experience I had anticipated and I was disappointed with the extremely obvious choice Greengrass makes to end his film. What he has done, however, is make us question anew - is George W. Bush's government prepared to defend this country? And why over the ages have humankind committed such atrocities in the name of God?