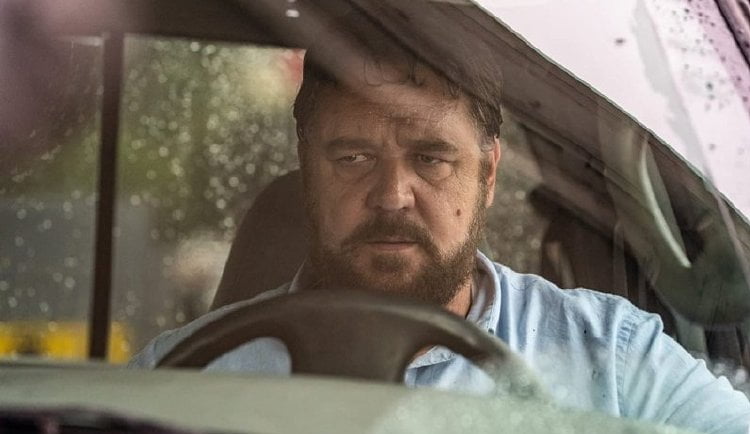 Rachel (Caren Pistorius, "Mortal Engines") is awoken, late, by a phone call from her best friend and lawyer Andy (Jimmi Simpson, HBO's 'Westworld') to inform her Richard now wants the house in their divorce, a house which is already a stress point as she’s putting up her freeloading brother Freddy (Austin P. McKenzie) and his girlfriend Mary (stuntwoman Juliene Joyner).  Racing against time to get her son Kyle (Gabriel Bateman, "Lights Out") to school in heavy traffic, she loses a client because of her delay.  Then, at a traffic light, she has the misfortune to honk at a truck being driven by a man (Russell Crowe) who is “Unhinged.”

While I wouldn’t’ recommend heading back to an indoor theater during a pandemic for this extremely violent and sadistic thriller, there is no denying it would make a bang-up drive-in feature.  Russell Crowe portrays the epitome of toxic male rage, exacerbated by his setting within a highly stressed society and ironically, when we first see him striding outside of his vehicle carrying a heavy gut, a scowl smeared across his bloated face, he reminded me of none other than Donald J. Trump exiting his helicopter after his feebly attended Oklahoma rally.  In other words, if the ugliness of our current 24 hour news cycle has you down, you may want to think twice about this one.

The road rage incident which sets everything in motion would lead one to believe this will be one long car chase a la Spielberg’s “Duel,” but writer Carl Ellsworth ("Red Eye," "Disturbia") casts Rachel’s anxiety net wider by having the killer (and boy is he ever, introduced as such in a particularly gruesome prologue) obtain her cell phone when she makes a convenience stop at a gas station.  Now he has access to her contacts and can torture her by targeting her loved ones.  And the first one he goes for is made a brutally public display of in a diner filled with patrons, establishing his no f&*$’s left to give invincibility and a city’s broadcasters in constant breaking news mode.

While the film could be summed up as ‘hulking brute relentlessly kills stranger’s friends and loved ones in increasingly horrific ways,’ one cannot fault director Derrick Borte’s ("The Joneses") production which is well shot, paced and edited.  Ellsworth’s narrative gets no more complicated than using cell phone and lap top technology and does defy logic more than once (Crowe’s maniac is so immediately threatening most would have phoned in his license plate on first contact; multiple police cars respond to every incident except for the lone cop who shows up at Rachel’s house, etc.), but he does keep our hearts in our throats throughout.  David Buckley's ("The Town") score keys off Crowe's windshield wipers in that prologue and maintains the beat, adding revving engines and squealing tires.

One wonders why Crowe would play off his own persona (that phone throwing incident) to such a harsh degree, but he does make an effective monster.        Pistorius has little to do but panic, but Bateman makes a mark as her son and Simpson is the most sympathetic victim here (we could care less about the one we hear survived his onslaught).  “Unhinged” is sadistic and unrelenting, its title truth in advertising.