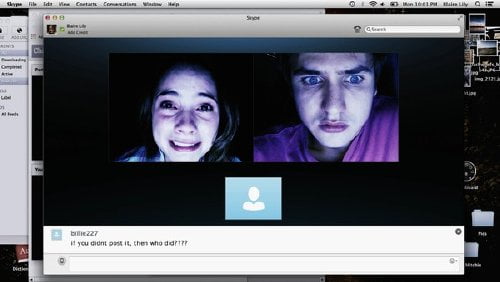 On the anniversary of her friend Laura Barn's (Heather Sossaman) suicide, Blaire (Shelley Hennig, "Ouija") is watching the YouTube video that captured it via a website article that links to another video - the shaming 'prank' that instigated it - when her boyfriend Mitch (Moses Jacob Storm) pops up for a Skype chat. Just as things are getting a little steamy, their call is suddenly interrupted by three of their friends. But something's not right - neither Blaire nor Mitch accepted their call and there's an interloper no one knows calling himself Billie227 in "Unfriended."

This brainchild of Russian director Timur Bekmambetov ("Wanted"), acting as a producer here, would have one believe that this is the first online found footage horror, but that was already accomplished last year with "The Den," a much more effective little movie. The best thing about this one is how film editors Parker Laramie and Andrew Wesman took footage shot of the six principals on GoPro cameras and incorporated them into the additional layer that is our POV, Blaire's laptop screen, adding typing and cursor movement that fleshes out Blaire's character more than the actress playing her. Screenwriter Nelson Greaves (TV's 'Sleepy Hollow') seems to have forgotten that horror is more effective when we relate to those threatened instead of rooting for them all (with one major exception) to get their just desserts. The movie's most effective in early goings, before we really get to know these people and when things that don't happen are eerier than what does. As Adam (Will Peltz, "The Collection"), Jess (Renee Olstead, TV's 'The Secret Life of the American Teenager') and Ken (Jacob Wysocki, "Terri") continue chatting, Blaire tries to reach Mitch privately with no response. When he reappears after the call is dropped in an attempt to get rid of Billie227, he lets Blaire know he was distracted - by a message purporting to be from Laura Barns. Soon enough, Blaire's getting Facebook texts from Laura too ('What are you watching Blaire?'), but everything she does to try and stop them doesn't work. When she Googles for information about how to shut down a dead person's Facebook page, she hits on a site about online communications from the dead, headlined with a picture of a hanging corpse, that conveniently sets up 'rules' the screenwriter can employ. Once it is indeed evident that Billie227 is Laura and that she's out for revenge, the film quickly goes downhill with a game of Never Have I Ever that reveals how ugly these people really are. Director Levan Gabriadze allows most of his cast to lean on shrill hysteria. We learn more about Blaire's state of mind by what she types and then thinks better of sending than anything Hennig says or does. Only Wysocki, the group's tech nerd, achieves sympathy (the film also stars Courtney Halverson as Val, added into the convo briefly to be offed quickly). Unlike "The Den," "Unfriended" uses real world applications like Facebook and Google, so why is a link to a YouTube video wrong (youtu.be)? There's also some oddness in that Blaire is shown starting up tunes which then fade away, an obvious gambit to introduce us to the concept so Billie227 can start up things like Connie Conway's 'How You Lie, Lie, Lie.' A prop used to initiate a death makes no sense when we remember who originally received it. The fact that so many of us are glued to screens both static and mobile for hours every day makes the 'online' footage concept relevant, its naturally constrained frames ideal for the horror genre. But while "Unfriended" is smart about how it uses the device to tell its story, the story itself is poor programming. Grade: