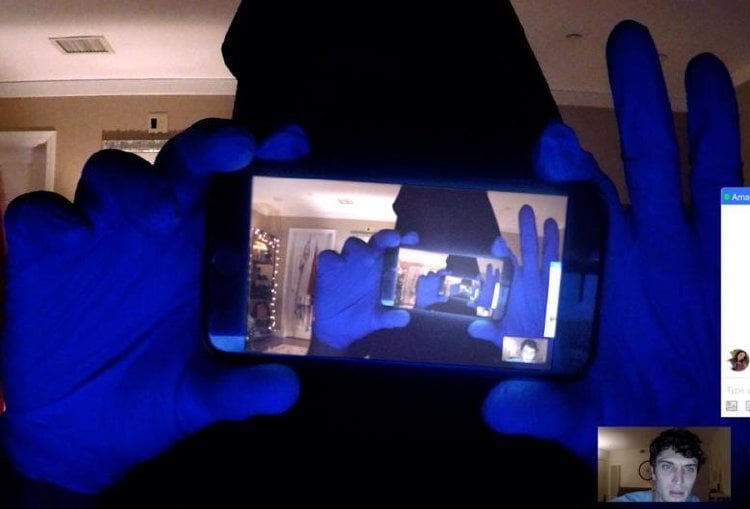 Matias (Colin Woodell, TV's 'The Originals') has secured a 'new' laptop to speed up his development of Papaya, an app that translates the spoken word to American Sign Language (ASL) in real time, to strengthen his faltering relationship with deaf girlfriend Amaya (Stephanie Nogueras). Multi-tasking, he's also connecting up with five friends for an online game night. But his programs keep crashing and when London based Damon (Andrew Lees, TV's 'The Originals') suggests he check out his hard drive, Matias finds a trove of extremely disturbing videos in "Unfriended: Dark Web."

Making his directorial feature debut, writer/director Stephen Susco (screenwriter "The Grudge") sticks to the laptop screen POV for the online found footage sequel and steps from the supernatural world into horrifying reality. But unfortunately, just like the first film, once we understand what is really going on, suspense starts to flag like a slowly leaking tire. The film begins with an amusing password hack that tips us off to Matias' character. His friends, the newly engaged Serena (Rebecca Rittenhouse) and Nari ("Get Out's" Betty Gabriel), Aj (Connor Del Rio), Lexx (Savira Windyani) and Damon know him well enough, immediately pigeon-holing Matias' laptop as a craigslist purchase. As Matias continually tries to reconnect with Amaya while Facetiming with his friends, the default user name, Norah C. IV, which he's been overwriting, pops up accusing him of having stolen her laptop. Meanwhile, the circle of friends are panicking over the contents of the videos on the laptop-from-hell, apparent snuff films so gruesome they cannot watch to completion. Another pop-up appears requesting something new from Norah C. IV, but will only converse on 'The River.' Matias launches the app which Damon immediately pinpoints as a Dark Web tool. Further investigation as to just what this user is looking (besides his mention of trephination) for points toward the last video on the hard drive, one which shows a hooded man climbing into the bedroom window of a sleeping woman matching the user's description. Matias' increasingly desperate defenses soon give way to the truth just as he connects with Amaya's roommate Kelly (Chelsea Alden, HBO's 'The Tale'). As he's chatting with her about Amaya's whereabouts, a hooded figure springs up behind her and drags her off as Matias' screen pixelates. The laptop owner blackmails Matias into using Amaya as unwitting hostage to retrieve the computer. Much of the plot makes little real world sense and the film's main character is not only dishonorable but nonsensical in action. Where the first film effectively used the retracted typing of its main character to get us inside her head, this one has Matias actively creating two realities (i.e., lying), a device that is quickly abandoned. The film is indeed unsettling with its initial implications, but as Matias' friends begin to suffer for his sins, the all powerful nature of the Dark Web players stretches credulity. The most effective of these kills is a swatting, specifically because of how it exposes the insidious nature of the Internet, relying on fake video tools recently demonstrated by putting false words into the mouth of Barack Obama. But by the time Susco's turned the meaning of 'game night' on its head, it's hard to care about any of it, ending with a cliched shock well past its expiration date. Grade: