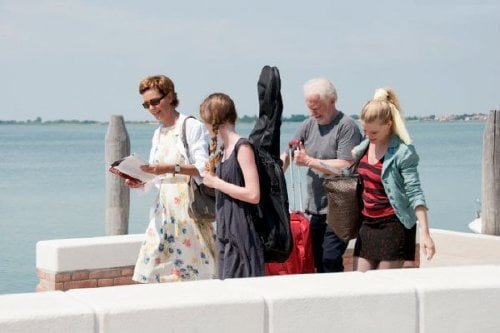 French thriller writer Francis (André Dussollier, "Tell No One," "Wild Grass") thinks the private cottage on the Venetian island of S'ant Erasmo is beyond his means, but is so taken with rental agent Judith (Carole Bouquet, "Red Lights") that he agrees to rent the place if she'll move in with him. One and a half years later, they're married and living happily there when his daughter Alice (Mélanie Thierry, "The Princess of Montpensier") comes to stay with her daughter Vicky (Zoé Duthion). Alice and her disappearance are the catalyst for churning up all kinds of past secrets which are "Unforgivable."

Cowriter (with Mehdi Ben Attia)/director André Téchiné ("Wild Reeds," "The Girl on the Train") makes films about people, often families, facing intense circumstances, but with "Unforgivable" he's overreached himself, stirring too many ingredients into the pot. The film could be seen as the extreme lengths people will go to act out against those that hurt them but it is difficult to figure out just which character is unforgivable. The film is intriguing for a time, and Venice locations and the still stunning Bouquet make it a treat for the eye, but by the time threads are (somewhat) pulled together in the third act, most will be beyond caring. It's also difficult to figure out who's who initially, as a jumble of relationships are thrown at us. After her meeting with Francis, Judith confides in best friend Anna Maria (Adriana Asti, "The Best of Youth") who used to be her lover. Anna Maria still pines for Judith, but tells her that an artist, like Francis, would be perfect for her. Judith also apparently lends Anna Maria 1K Euros - everyone in this film is short of cash. Anna Maria in turn provides the money to her jailed son Jérémie (Mauro Conte), who is on the verge of coming home. Meanwhile, fast forwarded back to S'ant Erasmos, Alice hints to Judith that her mother committed suicide over her father's cheating ways. The next day she's gone and Francis is beside himself. Judith checks with twenty-something Alvise (Andrea Pergolesi), fading aristocracy who now makes his money dealing drugs, but does not find Alice in his palazzo. She suggests Francis hire Anna Maria to find her, Anna Maria being a retired P.I.(!). Alice's husband Roger (Alexis Loret, "Alice and Martin") arrives in a helicopter to bring his daughter back to Zurich. Then the volatile Jérémie comes home and the plot doesn't merely thicken, it congeals. Early on Francis says he cannot write when he's in love - is this why he hires Jérémie to tail his wife, to upend his marriage? We discover Jérémie's always in trouble for beating on the gay men who approach him, a reaction to his mother's sexual preference? Alice is found in Paris by Anna Maria and sends a DVD to dad which she ends by seducing Alvise. As the story unfolds, it appears that Judith has sampled most of the characters in the film. The young man (Stefano Scandaletti) who chases Jérémie with a couple of armed buddies who ends up in the canal takes a shocking, horrible revenge. Then Jérémie does something worse. Francis is always there for Jérémie, yet the young man constantly rebuffs and insults him - is there a payoff for this relationship? Not in this movie. Or is Téchiné making a statement about aristocracy's decline, using Venice as his muse? La comtesse (Sandra Toffolatti), Alvise's mother, is fading and wishes to sell her estate to set up her son, just like Anna Maria. In "Unforgivable," Téchiné keeps throwing out teasing ideas, but he never makes good on any of them.

Do not be fooled if you saw the preview trailer of “Unfinished Song.” That markets the film as a story about a spry and cuddly group of old people who are drawn together to sing cute. It is far more than that, though. Foremost, it is about the love story between Arthur and Marion. He gives off such negative waves, Marion should not love him, but she does – dearly. Arthur’s grumpiness toward everyone drops from sight as he takes care of his beloved Marion. I have to admit, I got teary-eyed and all choked up more than once during “Unfinished Song” just watching the two characters interplay. Having outstanding veteran actors, Stamp and Redgrave, in the roles brings the whole movie up a notch. The love story about aging pensioners in their waning days together is complimented by the seniors’ music choir led by volunteer Elizabeth (Gemma Arterton), a bright and bubbly school teacher who volunteers to direct the aged chorale. As Marion’s character leaves this mortal coil (and Arthur), Elizabeth becomes increasingly important to the old curmudgeon. With her kindness and understanding, she helps Arthur becomes a more social animal and she helps bring out his inner singer. There is lovely chemistry between Stamp and his femme costars. “Unfinished Song” is real, not syrupy, sentimentality and I do not think there will be many dry eyes in the house, especially the heart-rending scenes between Arthur and Marion. The recent spate of quality elder-centered films – “A Late Quartet,” “Amour,” “Hope Springs” and “The Best Exotic Marigold Hotel” come to mind – is a very welcome trend in filmmaking as I approach the age of these characters.