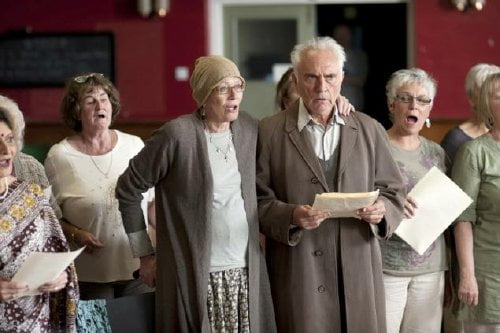 Arthur (Terence Stamp) and Marion (Vanessa Redgrave) have long been happily married despite the fact that they are polar opposites. She has a passion and love for life while he is a grumpy old curmudgeon who just wants to smoke his cigarettes and be left alone. He is, when Marion succumbs in her fight with cancer and leaves him an “Unfinished Song.”

Arthur (Terence Stamp, "Priscilla, Queen of the Desert") is a curmudgeonly senior who doesn't even get along with his own son but it's clear to everyone he adores his wife, Marion (Vanessa Redgrave), a woman who loves life even while cancer is draining it away. Still, Arthur thinks it's ridiculous that Marion persists in singing with the Old Age Pensionerz choir, despite the pleasure it brings her. When Marion dies, a most unlikely person begins to draw him out - Marion's young choir instructor Elizabeth (Gemma Arterton, "Hansel & Gretel: Witch Hunters") - and Arthur realizes he has an "Unfinished Song." Anyone who's seen the 2008 documentary "Young@Heart" will recognize its inspiration here, but senior singing is but the backdrop for a beautifully acted drama about how one can still change at the age of 70. If you've seen the movie's trailer, don't judge by it - it paints the film as a silly little comedy which it distinctly is not. What it is is unoriginal, sentimental and predictable - and I loved every minute of it. "Unfinished Song" is an unapologetic tearjerker and it works because its cast connects with truth and because writer/director Paul Andrew Williams ("London to Brighton," "The Cottage") has crafted it with love and a good eye. Arthur is lost when Marion spends the night in hospital, but it takes a lot of of coddling on her part to get the desired 'I missed you' on her return home ('Give me a kiss. I might not wake up tomorrow.'). Thing is, Marion's content with Arthur because she knows him perhaps better than he knows himself and she knows his love runs deep. Their conflict arises because he wants her to rest while she wants to sing and although he relents and takes her to the local community center, he always stays outside. When her friends come to serenade her, he calls them a bunch of nuisances. Elizabeth enters the group into a competition for which they must audition and Arthur finally agrees to watch a performance, but, as usual, he engenders bad feelings with James (Christopher Eccleston, "Shallow Grave," "Elizabeth") by accusing his son of having failed to pick them up when no such arrangement had been made. When Marion sings her solo, Cyndi Lauper's 'True Colors,' it is to Arthur who is so moved he hides to have his habitual smoke. James and his daughter Jennifer (Orla Hill) gather around. It will be her last performance and after she is laid to rest Arthur tells James that he knows he is a good dad while he himself has not been and perhaps it would be better for both of them to not see each other. Each had promised Marion to look after the other. When Elizabeth stops by, she gets Arthur to do something extraordinary - sing a song - and just like the rest of the film we know what will happen, but that doesn't matter a whit. Terrance Stamp, wrestling the sexy senior crown away from Paul Newman here, so completely lives in Arthur's skin that we know the Arthur Marion knows and his metamorphosis is both moving and a thing of melancholy beauty. He and Eccleston, both sporting the same scruffy facial hair, carve out that tentative kind of relationship formed over years of hurt and misunderstanding. The rebuilding isn't easy and is all the more satisfying for it. Redgrave gives us an eternal optimist, the type of person everyone loves to be around, and although neither she nor Stamp should give up their day jobs, each invest so much real emotion into their songs they stop you in your tracks. Arterton, getting out of her costume genre mode, is a revelation as an attractive but lonely young woman whose greatest gratification is seeing the joy in others. Adding additional personality to the choir are Anne Reid ("The Mother"), Elizabeth Counsell, Taru Devani, Eam John Holder and Arthur Nightingale. Williams's has a strong eye for composition, placing Arthur in his solitary smokes beneath an open window outside the boxy municipal building, accentuating his self exile, or splitting his screen in two with a wall, Arthur grieving on the edge of his bed while his wife, son and granddaughter happily make cakes on its other side. The director gives us insight into Arthur's state of mind by showing just how and where he chooses to sleep at night. With "Unfinished Song," he's proven that the tale is in the telling.

Do not be fooled if you saw the preview trailer of “Unfinished Song.” That markets the film as a story about a spry and cuddly group of old people who are drawn together to sing cute. It is far more than that, though. Foremost, it is about the love story between Arthur and Marion. He gives off such negative waves, Marion should not love him, but she does – dearly. Arthur’s grumpiness toward everyone drops from sight as he takes care of his beloved Marion. I have to admit, I got teary-eyed and all choked up more than once during “Unfinished Song” just watching the two characters interplay. Having outstanding veteran actors, Stamp and Redgrave, in the roles brings the whole movie up a notch. The love story about aging pensioners in their waning days together is complimented by the seniors’ music choir led by volunteer Elizabeth (Gemma Arterton), a bright and bubbly school teacher who volunteers to direct the aged chorale. As Marion’s character leaves this mortal coil (and Arthur), Elizabeth becomes increasingly important to the old curmudgeon. With her kindness and understanding, she helps Arthur becomes a more social animal and she helps bring out his inner singer. There is lovely chemistry between Stamp and his femme costars. “Unfinished Song” is real, not syrupy, sentimentality and I do not think there will be many dry eyes in the house, especially the heart-rending scenes between Arthur and Marion. The recent spate of quality elder-centered films – “A Late Quartet,” “Amour,” “Hope Springs” and “The Best Exotic Marigold Hotel” come to mind – is a very welcome trend in filmmaking as I approach the age of these characters.