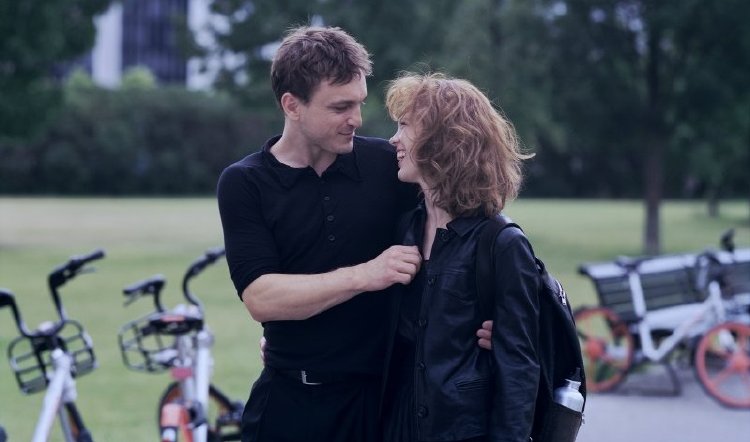 A Berlin city historian must hide the fact that she is actually a mythical creature, one who can only remain on land as long as the man she loves does not betray her.  Should she lose her lover to another, she must kill him and return to a lake in the forest.  She is “Undine.”

Writer/director Christian Petzold’s films focus on protagonists who are between two worlds, often betrayed.  In “Barbara,” a Berlin doctor is transferred to a rural post for political reasons.  In “Phoenix” a woman wears two faces and in “Transit,” whose stars return here, a man is stuck in limbo between the country he is fleeing and Mexico.  Although his themes ring through loud and clear in his latest, his fairy tale approach to romance renders it pretty but pointless.

When Johannes (Jacob Matschenz, "Never Look Away") informs Undine (Paula Beer, “Never Look Away,” “Transit”) he’s leaving for another woman she informs him point blank that if he leaves, she’ll have to kill him.  She watches him sitting in the café across the street from her work and sees that he has left.  After her talk, in the interior of the same café, Christoph (Franz Rogowski, “Transit”) approaches to compliment her and invite her for coffee.  He’s an industrial diver, he tells her, as she sees one in the fish tank rumbling above their heads.

We’ve seen Christoph underwater in his heavy diving helmet, noting the name Undine writtenon the cassion of the bridge he’s working on, followed by a heart.  We can see that his coworker Monika (Maryam Zaree, "Transit") has feelings for him, although he is oblivious.  But he instantly falls head over heels with Undine and she with him.  Until one day, walking to the train, they cross paths with Johannes and Nora.

In European myth, Undine is a water nymph, the same one Hans Christian Anderson based ‘The Little Mermaid’ on and which Neil Jordan referenced in his 2009 “Ondine,” both more interesting treatments than Petzold’s.  Nuggets of Berlin’s architectural history are interesting but have no bearing on the love story other than to suggest the fragility of Undine’s temporary reprieve from her watery world.  The film looks lovely, cinematographer Hans Fromm favoring lush greens, his underwater imagery ghostly (note the arrival of a legendary giant catfish), and Beer cloaks Undine in an air of mystery, but the film itself lacks depth.


IFC Films releases “Undine” in theaters and on VOD platforms on 6/4/21.