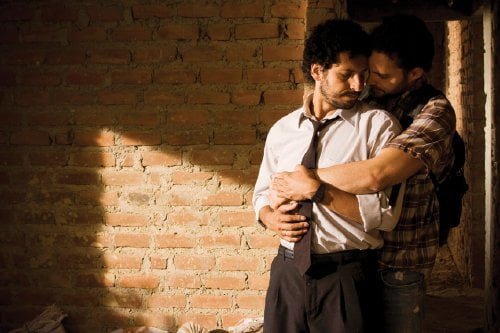 Miguel (Cristian Mercado) is a fisherman in a small coastal town in Peru. He is married to Mariela (Tatiana Astengo) who is very pregnant with their child. But, there is a chink in this idyllic life in the form of Santiago (Manolo Cardona), a photographer with whom Miguel has been carrying on a secret love affair. This is about to end when Santiago becomes a victim of an “Undertow.”

Miguel (Cristian Mercado, "Che: Part Two") has lived his whole life in the small Peruvian fishing village where he now awaits the imminent arrival of his first child with his pretty wife, Mariela (Tatiana Astengo). But Miguel keeps a large secret and when Santiago (Manolo Cardona, "Beverly Hills Chihuahua"), a painter shunned by the denizens of the town for being homosexual, disappears, Miguel's very soul is pulled down by the "Undertow." Writer/director Javier Fuentes-León makes his feature film debut with this vital, color coded love story chosen to represent his country for the Foreign Language Film Oscar. Stunningly photographed by Mauricio Vidal, "Undertow" is about a ghost caught between his lover's private shame and a town's public traditions. Mercado creates a complex man who remains likable even as he struggles with his own identity and machismo. The film begins as the village learns of the death of Miguel's cousin, Carlos. Although the village has a priest, Father Juan, it is Miguel's duty to preside at the 'offering,' where wrapped bodies of the dead are memorialized on the shore, then rowed out to sea. Miguel clearly loves his wife and dotes on her as they await the birth of their first child, but when he tells her he has nets to mend, he's really meeting Santiago, his secret lover. Santiago wants Miguel to go on a trip, but Miguel is tied to his responsibilities and refuses to acknowledge his secret lover. Then one night, Santiago appears in his home, but, strangely, Mariela doesn't appear to notice him. A confused Santiago tells Miguel he dashed his head against the rocks in the ocean and Miguel finds his body and anchors it, so he can continue live two lives. At first, the duo delight in finally appearing in public together. But when teenagers break into Santiago's abandoned home, they discover a nude painting of Miguel and rumors begin to circulate. Distraught, Mariela confronts Miguel who cannot lie to her and she leaves with their son. Finally Miguel realizes that he must offer Santiago in front of the entire village so that his spirit may rest. Fuentes-León's film is so packed with visual symbols, he could almost have made it silent. The color blue signifies not only the ocean, but the love between the two men. Shades of red signify not only the earth, but Mariela. Miguel is always seen in blue until later in the film, when he sports a pair of red shorts. Before his death, Santiago approaches Mariela in the market and buys her a candle for the upcoming birth of her child - the candle is purple, the result of blue mixed with red. Spirituality is also a strong motif. Father Juan discovers Miguel naked on the beach. Later when his nude painting is discovered, a cut is made to the priest uttering 'body of Christ' at Mass. When Miguel discovers Santiago's painting for himself - he smears paint - red paint - to obscure his face. The director and his cinematographer have keen eyes for visual storytelling. Miguel and Santiago's living meetings are always in sheltered spots, between brick walls, within the ruined hull of a boat, its blue paint peeling. Blue waves come into shore as reddish sands swirl in the wind, perpendicular to the sea. A stunning score by Selma Mutal Vermeulen helps set the place and its culture while lyrics speak of love.

This romantic ghost story was Peru’s submission for this year’s Best Foreign Language Film Oscar nomination. It did not make the short list of nominees. Still, “Undertow” is beautifully shot in a lovely locale in a sunny Peruvian fishing village and has an attractive, simpatico trio of actors. The story, considered by some as a gay “Ghost,” is a three hander with Miguel right in the middle. He is married to and appears to honestly love Mariela and their soon to be born child. But, handsome Santiago and his attentions to Miguel draw the man out and they carry on their secret affair. Then, the title subject intrudes upon their lives and Santiago is lost at sea. Soon, though, he reappears but only to Miguel. Because his body was never found, Santiago is doomed to wander the small village for eternity. Miguel enjoys having his ethereal lover with him but knows, in his heart, that he has to find Santiago’s body to offer it to God and free his spirit. Mariela, in the meantime, becomes aware of her husband’s infidelity as Miguel comes out of the closet to bring closure for his late lover. First time feature film writer-director Javier Fuentes-Leon makes an impressive debut with his gay ghost story set in an idyllic place. His characters are tanned, fit and good looking. You can nearly feel the warmth of the sun and the gentle breeze off of the water as Miguel struggles between his love of both Mariela and Santiago and his duty to his friend’s spirit and to God. The duality of faith, the prospect of fatherhood, true love(s) and the acceptance of God is all heady stuff for a newcomer to get his arms around. Fuentes-Leon, though, does a solid job balancing characters and story and creates a sympathetic surreal tale. Acting is good, though some dialog comes across as stilted. This can be shaken off as inexperience and the tyro filmmaker will bring a credible calling card to his next project.