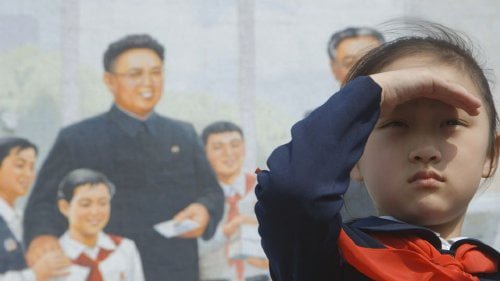 The North Korean government wanted to showcase how great it is to live in the Communist state. They negotiated with Russian filmmaker Vitaly Mansky to come to Pyongyang and have him and his documentary crew follow one young girl, Lee Zin-mi, and her parents for a year. It was soon apparent Mansky had little freedom to shoot what he wanted. But, the filmmakers were able to smuggle out uncensored footage and brings us into that totalitarian state in “Under the Sun.”

Russian documentary filmmaker Manskiy was hired to show the glories of North Korea with Lee Zin-Mi, an eight year-old schoolgirl from an average family in Pyongyang joining the Korean Children's Union, as his central subject. But the filmmaker informs us at the onset that a script, locations and 24 hour escorts were assigned, his footage to be handed over at the end of each day. Manskiy took advantage of the North Koreans' ignorance of technology, running his camera when they thought it was off, copying and deleting his surreptitious coverage. Kim Jong-un's hoped for propaganda film has turned into something else entirely "Under the Sun." It's extraordinary how revealing Manskiy's film is even before he begins to include behind the scenes 'outtakes.' One of our first, rare looks at North Korea's capital city impresses with just how ghostly its streets are, enveloped in foggy smog, its wide boulevards empty of vehicles. We meet Lee Zin-Mi in a bright, spacious apartment, a big, red Kimjongilia begonia blooming in a window. She tells us how her father's told her she lives in the most beautiful country in the world. Then she goes to school where a teacher endlessly repeats a story about 'the great Generalissimo Kim Il-sung throwing boulders at traitorous landowners and Japanese aggressors, students mouthing back her words. The facade begins to fall ever so slightly, the boredom of some students evident. We see her father being fawned over as the engineer of a manufacturing plant exceeding government goals. Her mother is congratulated for her prize winning Kimjongilia and her daughter's recent entry into the North Korean system by her supervisor and coworkers at a soy milk plant. With a few rare title card insertions, Manskiy informs us that Zin-Mi told him her dad was a print journalist and her mother worked in a cafeteria and the only time he ever saw children entering or exiting the school was on the day he shot there (he surmises that the children actually live there, their parents housed in the barracks he noted beside the factory, his camera peeping into windows bearing out his theory). After viewing the ceremony where Zin-Mi receives her red scarf, a veteran telling her class about American cowardice during the Korean War and families having their pictures taken in front of giant statues of their great leaders, we come away with a portrait of a brainwashed people told what to do every waking moment since their births. Even before we see Manskiy's handlers coaching his subjects we can spot the deceptions, a family of three sitting down to a banquet that would feed at least a dozen. As groups gather in public squares to sing and dance with patriotic pride, Manskiy's camera moves to the side where people sweep the streets and tend the grass with tweezers. Zin-Mi plays her part to perfection until she has trouble with complex dance steps during a lesson. Finally her teacher says a break is in order, but she immediately scolds the little girl and begins to show her the far more difficult steps she has yet to learn. As off camera assistants try to get the girl to stop crying, she's told to think of something good. 'What?' she asks. She fails to think of anything. The Icarus Films DVD comes along just as another documentary on North Korea, "The Lovers and the Despot," is released into theaters, two instances of the Kim dynasty relying on foreign filmmakers who turned the tables on them. The "Under the Sun" DVD includes two extras. The first, a BBC news piece, includes an interview with Manskiy describing how he smuggled his film out and tells how MoMA wouldn't screen his film, afraid of North Korean retaliation. The second, a Daily Vice report, interviews a member of Jayu, the human rights organization which copresented the film at Toronto's Hot Docs Festival. Grade:

A beautiful young woman (Scarlett Johansson) drives the roads around a Scottish town looking for men. But, she is very selective and only picks up those without family or friends while cruising in her white van. What does she do with the men she seduces? You may find the answers in “Under the Skin.” Glazer’s first film, “Sexy Beast” is a monster movie cloaked in a heist flick – just watch Sir Ben Kingsley’s outrageous character and you will see why it is a monster movie – and his second, “Birth” is about a woman who meets a 10-year old boy who tells her that he is the reincarnation of her late husband. You can see that the helmer is not your average filmmaker, that he likes to do films his own way and he, yet again, follows that road as he enters the realm of science fiction; but not your average science fiction. Director Jonathan Grazer and his co-scribe Walter Campbell adapt Michael Faber’s 2000 novel, Under the Skin, and make the story of alien abduction of humans, for food, their own. The reason for this is two-fold. One is how the adaptation is cloaked in ambiguity as the grizzly and graphic aspects of the source material are kept at arms length, allowing the viewer to make his/her own decisions about what is going on. The other is Scarlett Johansson as the nameless alien on the hunt for men. If you look into the making of “Under the Skin,” you will appreciate her dedication in creating a unique, compelling character who undergoes a transformation – is she becoming human? “Under the Skin,” though quietly paced, is a mesmerizing film the works on several levels. The art direction of the woman’s various safe houses where she lures her victims is simple but effective, allowing the camera to capture the unearthly lairs’ blackness in a haunting way. Glazer and his team, in casting the film, recruited everyday guys to play the roles of the woman’s victims and near victims and it works very well. The score, too, is integral to the strange story and creates an eerie, suspense-inducing feeling throughout the film. “Under the Skin” is the kind of film that will attract a variety of audiences – fans of Scarlett Johansson, sci-fi followers and mystery buffs will find something that appeals, especially Scarlett’s fans. The haunting other worldliness of “Under the Skin” gets, well, under your skin.