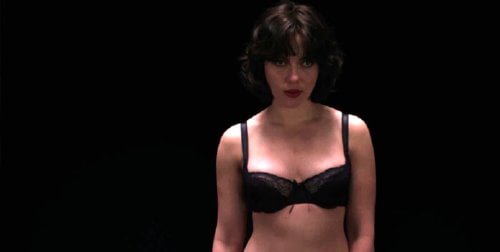 A young woman's body is dragged into the back of a van then unloaded into a remote house where she is placed upon a white lightbox. Another woman (Scarlett Johansson, "Don Jon," "Her") surveys her, then puts on her top, skirt and ripped tights. After a stop at Glasgow's St. Enoch Centre where she picks up a new fake fur jacket, the woman begins to chat up men along the city streets from her van, looking for those who will not be missed in order to harvest their life essence in "Under the Skin."

Director Jonathan Glazer ("Sexy Beast," "Birth") liberally adapts Michel Faber's debut novel about an alien disguised in human form who hunts humans for her home planet and it's a stunner. This visually stylish, eerily scored film isn't for those who prefer the straightforward, instead suggesting from the protagonist's unearthly point of view. Johansson, who walked and drove the streets of Glasgow incognito interacting with strangers unaware they were being filmed (with a few exceptions), has never been better, her rigid physicality denoting one not quite comfortable within her own skin but capable enough of blending in. After asking directions from a young man, she offers to drop him off and he can't believe his luck. After some serious flirtation, she takes him to her house, leading him into darkness as they both shed clothes. Walking backwards, nude, the alien draws the man, who begins to sink into the glossy black 'floor,' in until he disappears. Later, after she picks up a club go-er (Paul Brannigan, "The Angel's Share"), we'll see from his perspective, the woman walking above, the prior man, shriveled, disappearing into himself as he himself floats in suspension. The woman also stops at a rocky beach and talks to wet-suited swimmer (Krystof Hádek) who says he's from the Czech Republic, but the ideal candidate gets away when a real life tragedy ensues, a husband attempting to reach his wife, out in a riptide trying to save the family dog. The motorcycle man (professional road racer Jeremy McWilliams), who acts as the alien's 'cleaner,' appears later, walking right past the squalling infant left behind. (we'll learns their fates later, via radio news report). And then there's the late night grocery shopper (Adam Pearson), a man deformed by neurofibromatosis, a condition the alien perhaps doesn't even recognize, he himself wary, unused to unflustered regard. It with this man, who is eventually freed, that we begin to see something change with the alien, whose human skin has grown deeper. She has an extended encounter with a man who tries to help her in this confused state, but when, after several days, he expresses himself sexually, she's thrown and runs off into a forest where an overly helpful ranger will exhibit humankind's irrational fear of the different. Visually the film is a mix of long shots which utilize the greenish gray of Scotland winter, close shots of Johansson using hidden cameras developed for this movie and the black and white fx shots that are like an alien, haunted house version of "A Clockwork Orange's" Korova Milk Bar. The climactic makeup effects reveal is like a photonegative version of "The Man Who Fell to Earth's" flashback scenes. First-time film composer Mica Levi, whose metronomic heartbeat pulses and whose eerie theme is a seemingly subconscious alternative version of the 'Dark Shadows' TV series opener, unsettles with a score adds immeasurably to the overall alienated strangeness. Looking through the eyes of his visitor from another world, Jonathan Glazer finds both the predatory and compassionate in human nature. This visionary science fiction film is haunting and the best new release I've seen so far in 2014.

A beautiful young woman (Scarlett Johansson) drives the roads around a Scottish town looking for men. But, she is very selective and only picks up those without family or friends while cruising in her white van. What does she do with the men she seduces? You may find the answers in “Under the Skin.” Glazer’s first film, “Sexy Beast” is a monster movie cloaked in a heist flick – just watch Sir Ben Kingsley’s outrageous character and you will see why it is a monster movie – and his second, “Birth” is about a woman who meets a 10-year old boy who tells her that he is the reincarnation of her late husband. You can see that the helmer is not your average filmmaker, that he likes to do films his own way and he, yet again, follows that road as he enters the realm of science fiction; but not your average science fiction. Director Jonathan Grazer and his co-scribe Walter Campbell adapt Michael Faber’s 2000 novel, Under the Skin, and make the story of alien abduction of humans, for food, their own. The reason for this is two-fold. One is how the adaptation is cloaked in ambiguity as the grizzly and graphic aspects of the source material are kept at arms length, allowing the viewer to make his/her own decisions about what is going on. The other is Scarlett Johansson as the nameless alien on the hunt for men. If you look into the making of “Under the Skin,” you will appreciate her dedication in creating a unique, compelling character who undergoes a transformation – is she becoming human? “Under the Skin,” though quietly paced, is a mesmerizing film the works on several levels. The art direction of the woman’s various safe houses where she lures her victims is simple but effective, allowing the camera to capture the unearthly lairs’ blackness in a haunting way. Glazer and his team, in casting the film, recruited everyday guys to play the roles of the woman’s victims and near victims and it works very well. The score, too, is integral to the strange story and creates an eerie, suspense-inducing feeling throughout the film. “Under the Skin” is the kind of film that will attract a variety of audiences – fans of Scarlett Johansson, sci-fi followers and mystery buffs will find something that appeals, especially Scarlett’s fans. The haunting other worldliness of “Under the Skin” gets, well, under your skin.