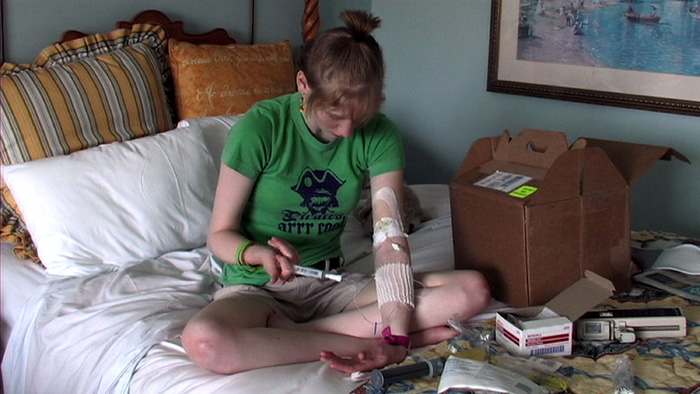 Over the last three decades man has faced the scourge of HIV and made massive inroads into the treatment and cure of that dreadful disease. During this same period, another disease has infected some 200000 victims annually. First found in the town of Lyme, Connecticut, in the 1970’s, the bite of a simple deer tick would have devastating impact on thousands, even hundreds of thousands, of lives due to misdiagnosis, improper treatment and medical advice that “it’s all in your head.” The plight of those, patients and physicians, fighting the insidious disease, and what is being done to eliminate it, gets an in-depth study in the riveting documentary, “Under Our Skin.”

"Under Our Skin" covers all the bases about the progression of Lyme Disease since its discovery in Lyme, CT in the 1970's (recently the subject of indie film "Lymelife"). We follow several victims, including Mandy, a pretty young woman about to be married whose fiance Sean will watch his wife become increasingly debilitated even as she is being treated. Other victims, such as U2 tour coordinator Dana, show no symptoms but live with chronic pain (and whose loss of health insurance during the course of the doc smacks of but one appeal to the band for the cause). We get the animated medical explanation of how the disease is transmitted and an update as to how it has evolved over time (in an explanation that is scarily aligned with M. Night Shymalan's "The Happening"). The film's final third is an indictment of a health insurance industry that sets guidelines with a panel that has a 75% conflict of interest with big Pharmas and strips doctors whose methods achieve success outside of those guidelines of their ability to practice. It also refuses to acknowledge a huge amount of victims because of those guidelines - it is shocking how many times 'told it is all in my head' is heard. A forest ranger who knew exactly what had happened to him, who had the telltale rash and who even had the tick that bit him in a vial tells of having to see *five* doctors in order to be properly diagnosed. The film is certainly interesting, but considering its excessive running time, very little is given over to the opposing view and that edited in to mock the words of the speaker. One doctor's court trial never makes it clear if any of patients had less than desirable results. One of the victims showcased, mother Elise, is shown struggling through multiple pregnancies only to finally succeed and discover her child probably has the disease, something most of her miscarried fetuses tested positive for, and her decisions are not questioned. Statistics are boldly presented on suppositions of undiagnosed cases. The film has been beautifully shot, especially an opening montage where a tick lurks amidst the beauty of nature.

Sure, we have all heard of Lyme disease but I, for one, never knew the disastrous effect it had on so many, mainly because the medical profession, unfamiliar with the new urban blight, treated the wrong illness. Simply put, man’s incursion into the wild has slowly eliminated the natural host of the deer tick and replaced it with another – human beings. It is no wonder that the symptoms of the disease were overlooked, at first. Filmmaker Andy Abrahams Wilson interviews and follows six Lyme disease sufferers and the small, but undaunted, group of physicians who have risked their careers to save the lives of their patients. Often diagnosed as arthritis, the disease is treated as such but the underlying effect on the immune system remains untreated. Some doctors even advised their patients that the disease is all psychosomatic and they should see a psychiatrist. This ignorance and misdiagnosis thrust the patients into a world where their bodies and minds degenerate, resulting, frequently, in death. Since the American medical establishment has decided to ignore the proof, by the tiny cadre of researchers, that Lyme disease is chronic and requires a defined treatment, it established a different regimen of treatment, a regimen that is embraced by the health care industry. Because of this, requests by Lyme patients and their knowing doctors for proper medical treatment are often denied, placing enormous financial burden on the victims. This far-ranging documentary is a real eye opener, presenting its wealth of information and analysis in a clear, well-flowing manner. Simple animations are interspersed through “Under Our Skin” to help explain the dangers of Lyme disease. However, the filmmakers never talk down to their audience and use the anime to educate. This is the essence of good docu filmmaking and