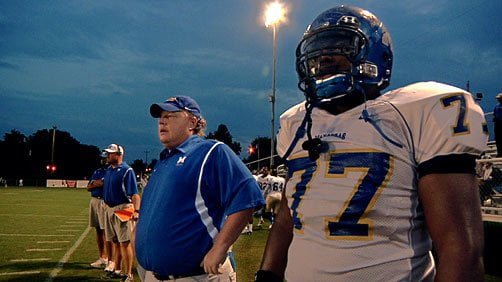 Successful Memphis businessman Bill Courtney was well off enough to do something he always wanted – to coach the local high school football team, the Manassas Tigers. The team has been on the losing side of the scoreboard for decades and the school would even rent the team to rival schools to practice on (and beat). When Coach Courtney took the reigns of the team he instilled the boys with honor, bravery and excellence on and off the field in “Undefeated.”

I fail to understand how this perfectly good but late-to-the-sports-as-inspiration-for-troubled-underprivileged-teens documentary won an Oscar when the far, far superior (and, at the time, original) "Hoop Dreams" failed to score a nomination. It must be Harvey Weinstein again. Daniel Lindsay and T.J. Martin follow a season with the struggling, largely African American Manassas Tigers football team and their white coach, Bill Courtney, who notes in a speech that he deals with more high stress events with his players in one season than most coaches do in an entire career. Three strudents are singled out for special attention, each dealing with his own problems. The documentary is, indeed, heartfelt and often moving, but it's all been done before. In fact, we saw the same subject get the feature treatment in 2009's "The Blind Side."

“Football does not build character, it reveals character,” Bill Courtney. This is the essence of the man who loved the sport and the boys on his team playing it. Early in the film he recites a litany of problems and catastrophes that he faces as the football coach at Manassas High. He punctuates this list of woes by stating that this was just over two weeks, not a career. Despite these obstacles, Coach Cunningham took his Tigers from losers to winners over the tough season. Co-directors Daniel Lindsay and T.J. Martin (Oscar winners for Best Documentary Feature) concentrate their efforts, besides on the coach, on three of the key players on the Tigers – Montrail “Money” Brown, O.C. Brown and Chavis Daniels. The relationship between them and Coach Cunningham, one of tough love, carries through the film as he builds up his team, gives them confidence and dignity – and, for the first time ever, a winning season. “Undefeated” follows convention in this straightforward documentary that you (almost) know what the outcome will be. The choice as best documentary feature by the Academy seemed odd to me, especially when matched against the moving documentary, “Pina,” about German dancer and choreographer Pina Bausch by Wim Wenders and shot in genuine 3D (no headache). But, that is not the real problem. The Academy voters that select the nominees overlooked even better films than the ones nominated, like “Nostalgia for the Light” (my choice), “Senna,” “These Amazing Shadows” and “Cameraman: The Life and Work of Jack Cardiff.” “Undefeated” is an inspirational and often touching film that lets us get to know a dedicated coach who has faith in his players and does what he promises (almost).