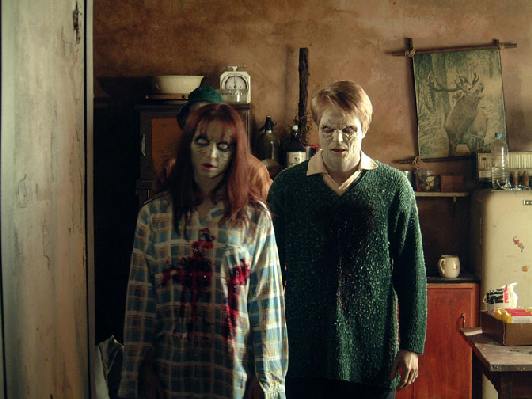 The tiny fishing village of Berkeley, Queensland, Australia falls under a mysterious and weird bombardment of meteors. The inhabitants of the town think nothing of the strange event. That is, until they become aware that this other worldly occurance has awakened the dead and the flesh-eating zombies are out to get the living in “Undead.”

Bucolic Berkeley, Australia's Miss Catch of the Day is having a bad one. After bank baddie Chip Chipperman (Noel Sheridan) forecloses on her family farm, Rene Chapman (Felicity Mason) is forced to accept a ride from the loathsome Agent (Steve Greig) to get to the city where her grandmother is not exactly welcoming her. These problems are nothing, though, when Agent and Rene discover the road out of Berkeley's been blocked by a trail of cars that now belong to "Undead." Writer/director brothers Michael and Peter Spierig obviously have produced a (very) low budget labor of love, but sadly it's mostly stillborn. Their one good gore effect, a walking spine, is clearly an homage to fellow Aussie Peter Jackson's effects from his jubilant early zombie splatter flick "Dead Alive" (aka "Brain Dead"), and they make the mistake of using it twice. Cliches abound, from the pregnant woman to the overcrowded bomb shelter, but it is difficult to not give a little respect to a film with zombie fish that stars a guy named Mungo McKay. "Undead" has potential as a cult item for those willing to ride out the dry stretches. Agent is infected and Rene is suddenly fighting for her life when a silent stranger armed with a three-gun rifle contraption picks off her attackers. Rene runs through the woods and enters a remote cabin where the dad in a family photo's been obscured by the word 'Arsehole' - her savior. Marion (Mungo McKay) is a survivalist of few words who admires Rene's pluck, but soon they're joined by Wayne (Rob Jenkins) and his pregnant girlfriend Sallyanne (Lisa Cunningham), who bears Rene a grudge for winning away her pageant crown (Rene looked better in a bikini than the expecting incumbent). Accompanying these two are Sheriff Harrison (Dirk Hunter), an obnoxious incompetent who keeps insisting on disarming everyone and Constable Molly (Emma Randall) on her first day on the job. A run of undead force the six into Marion's cellar, then even deeper into his shelter, where noisy hysteria reins. Eventually they're forced back upstairs because of lack of supplies. Marion warns them that the zombies are caused by aliens (presumably the ones who lobbed the meteors carrying zombie infection) and the strange rain that accompanies them, but no one believes him until they encounter these things themselves. If at first the Spierig's seem to be throwing everything but the kitchen sink into their plot, bear with them - they do actually tie up their convolutions into a whole. Still this comedic horror too often mistakes noise for comedy and isn't scary enough to stand out from the pack. A couple of jokes aimed at Australian country and love of beer are more likely to be appreciated by locals. The inexperienced cast are mostly over-exuberant, with the exception of the deadpan McKay ('Are you a fighter, fish queen, or zombie food?'). Zombie effects are decent, but the aliens are achieved with artfully draped black sheeting and rubber appendages. "Undead" was shot on 35 mm, but is very grainy looking and has a yellowish tint (golden orange horizons in the films final scenes are striking, however). "Undead" is classic drive-in fare - good for a late night giggle or two.

Things start out innocently enough as Rene (Felicity Mason), a small time beauty queen, must cope with losing the family homestead to the tax collector. With nothing to keep her in Berkeley she decides to break away for the tiny town and seek greener pastures. She hitches a ride but before they get too far the car is blocked by what appears to be abandoned cars on the road. Her driver gets out to check and, to Rene’s shock, he is murdered by something no longer human. Rene runs from the carnage and seeks refuge at the home of local eccentric and gun shop owner, Marion (Mungo McKay), who claimed that he was recently attacked by zombie fish. Though the townsfolk dismiss his claims as simply crazy, there is method to his madness when the newly dead rise up with the insatiable hunger for human flesh. Four other refugees from the town join the pair and they must try to find a way out or become lunch. Multi-multi-hyphenate brothers, Michael and Peter Spierig (credited with writing, direction, producing, editing, sound, visual effects (and, probably, catering)), come up with a derivative and sometimes amusing zombie tale that harkens to Peter Jackson’s far better and original “Braindead (1992).” The brothers’ premier feature is ambitious but doesn’t take us anywhere new. Acting is perfunctory at best with Mungo McKay (you have to love the name, Mungo) channeling a pudgy version of Clint Eastwood with gravelly voice and deadpan declarations such as “You gotta ask yourself: Are you a fighter, Fish Queen, or are you zombie food?” The rest of the cast goes through the motions with various levels of skill, though none are Oscar material. The film, although shot in 35MM, is murky and grainy, making it look and feel amateur. The Spierig brothers have some work ahead of them if they plan on continuing in the film business, especially if they keep emulating Peter Jackson. It is an odd coincidence that “Undead” comes out at just the same time that George Romero’s “Land of the Dead” hits the screen. My choice between the two? Stick with Romero.