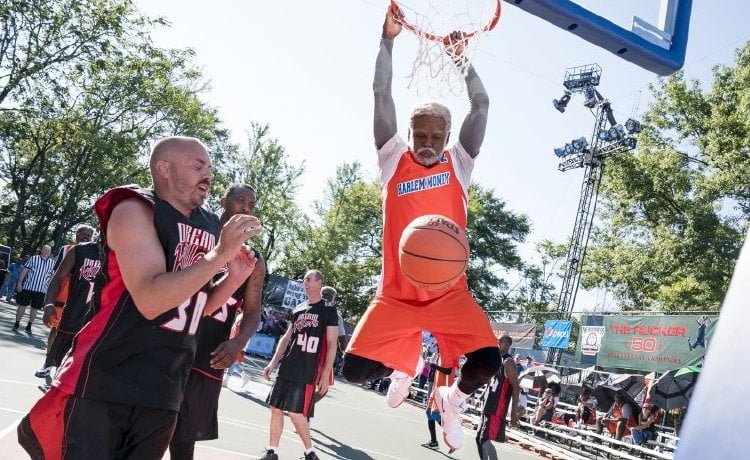 After losing his savings and the team he entered into Harlem's Rucker Classic street ball tournament, Dax (Lil Rel Howery, "Get Out") takes a gamble, going on a road trip to round up senior players with the legendary "Uncle Drew."

Screenwriter Jay Longino takes the underdog sports template and layers it with the 'aren't seniors hilarious when they don't act their age' style of comedy to spin a series of Pepsi Max commercials into big screen entertainment. But surprisingly, director Charles Stone III ("Drumline") finds real warmth and character-driven humor in Longino's screenplay, blessed with a group of former NBA (and WNBA) players who still got game. Boston Celtics point guard Kyrie Irving makes the wise choice of underplaying his commercial character, Uncle Drew's low key nature enabling his physical and verbal comic setups to slam dunk his punch lines. Broke after spending $5K on the tournament entry fee, Dax is scrambling to keep his materialistic girlfriend Jess (Tiffany Haddish) and his prize player Casper (Orlando Magic forward Aaron Gordon) while enduring the childishly needling taunts of the tournament's champion coach Mookie (Nick Kroll). Dax is already a bundle of insecurities, teased for his stature and haunted by the blocking of his game-winning shot. After putting himself in hock for almost $1,000 worth of fancy kicks for Casper and his crew, Dax learns they've defected to Mookie and Jess throws him out. At the local barbershop, Louis (Mike Epps) and Angelo (J.B. Smoove) recount the legendary antics of 60's street player Uncle Drew, but Dax equates their stories with Bigfoot. Then one day, sitting in a court after failing to pick up any new players, he witnesses something extraordinary. Before he's had much time to even think, his mention of Rucker Park has him learning the rules ('no shoes in the Boom Boom Room') of Uncle Drew's flame painted love van. With Uncle Drew as pilot and DJ, Dax finds himself at a church service alarmed by the preacher's handling of a baby in a baptismal pool. 6' 10" Preacher (Chris Webber, first among equals), with hands the size of hams and a sweep of hair higher than James Brown's, is the first member of Drew's squad to join the traveling sideshow, despite the best efforts of his intimidating wife Betty Lou (Lisa Leslie). They find Lights (Reggie Miller) enthusiastically shooting hoops at Dave and Buster's - and not making any of them, the man as blind as a bat. Boots (Nate Robinson), standing out with his Frederick Douglas 'do but unresponsive in a wheelchair, amazes granddaughter Maya (Erica Ash) by catching Drew's chest pass. She's also charmed by Dax, believing he's on a charitable mission to give these guys some late life joy. The last player to be picked up, Big Fella (Shaquille O'Neal), is a kung fu instructor estranged from Drew since the legendary ladies man slept with his girl. Their first team effort on a $100 bet Dax makes with a girls' high school coach at a gas station goes badly, but Dax learns something about his guys' heart when they pitch in to cover it and fill the van's tank. Back in Harlem, Drew presents a gift to each of the guys just like the Wizard of Oz. Lights' prescription goggles enable him to see. A gold cross gives Preacher faith. The old shoes that gave Boots his name get him out of his chair. Only Big Fella remains unchanged. Longino works Drew's old-timey appeal into all aspects of his character, schooling Dax on music and a whole bunch of whipper snappers on the dance floor. But Drew has lessons to learn too, deftly handled in repairing his relationship with Big Fella. Their graveside reconciliation is actually quite moving. Drew also has lessons for Dax, the young coach's aversion to actually playing the game tested as their clock counts down. But the most fun comes from the interactions of the makeup-aged Irving with former NBA greats, the five (six counting Leslie's late breaking alternate) performing like a well oiled machine, their geriatric limbs on motor memory. Grade: