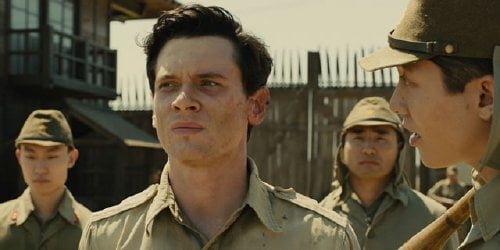 Louie Zamperini (Jack O’Connell) was the son of Italian immigrants and a petty thief as a kid and the youngest American runner to compete in the 1936 Olympics in Berlin. But his greatest feats were to survive the crash of his B-24 in the middle of the Pacific during WWII, endured 47 days in a life raft with his two comrades without food or water and spent two years suffering as a POW under the cruel torture of a sadistic tormentor named The Bird (Takamasa Ishihara) but through it all he remained “Unbroken.”

Director Angelina Jolie debuted with a small scale, terrific film about the Bosnian war, "In the Land of Blood and Honey." Now, taking on a big studio film based on Laura Hillenbrand's best seller about the incredible life of Louis Zamperini, she's had to ramp up too quickly directing a big production and the strain shows. Hillenbrand's book covered more ground, following Louis well past his war years but the adaptation by Joel & Ethan Coen ("True Grit"), Richard LaGravenese ("Water for Elephants") and William Nicholson ("Mandela: Long Walk to Freedom") stops as soon as returns from the war. That in itself may not have been a problem, but Jolie and her star Jack O'Connell, so vibrant in this year's "Starred Up," never get us into Louis's head, instead offering up repeated motivational catch phrases. Despite a fine production shot by the great cinematographer Richard Deakins ("Skyfall," "True Grit"), the film is just flat and old fashioned, not in a good way but in that 'seen it all before' way. Even the torture Louis undergoes feels restrained. There are no nuances to anything. The film's one standout is Japanese pop star Miyavi as Louis's nemesis The Bird. Despite getting little in the way of back story here, Miyavi's twisted take fills in the gaps. Grade:

This is Angelina Jolie’s second foray behind the camera directing a feature film (her first was the uber-serious Bosnian civil war tale, “In the Land of Blood and Honey”). Her second film is also uber-serious and the “true story” based on the book of the same title by Laura Hillenbrand about Zamperini’s war-time exploits. I am in the midst of reading the book and what strikes me most about the film is it highlights all the aspects of Louie’s amazing life but without the book’s depth of characters. With the screenwriting team of Joel and Ethan Coen, Richard LaGravenese and William Nicholson, I expected more from “Unbroken” than I got. The story is told in a perfunctory, episodic way as Louie and his surviving companions, “Phil” Phillips (Domhnall Gleeson) and “Mac” McNamara (Finn Wittrock) must brave endless hunger, thirst, burning hot days, chilling nights and sharks only to be strafed then captured by the Japanese. Once the story enters the prisoner of war camp, the hardships become more human, or inhuman, at the hands of The Bird (played with a deliberate effeminate, and all the more sinister, turn by Japanese pop star Takamasa Ishihara in his film debut). The violence, while jarring, is relatively bloodless, as expected for a PG-13 rated film. But, this diminishes the horrors suffered by Louie Zamperini by his captors – Louie personifies the thousands and thousands of his fellow GIs who dealt with the same fate, as does The Bird personify all the brutal prison guards. The rest of the cast of prisoners and jailers are just background characters for the most part. “Unbroken” is an earnest work that does not carry the impact of the book. Jack O’Connell, who was terrific in last year’s “Starred Up,” is merely okay as the stalwart survivor Louie Zamperini. But, still, it is a story worth telling. It could have been told better, though.