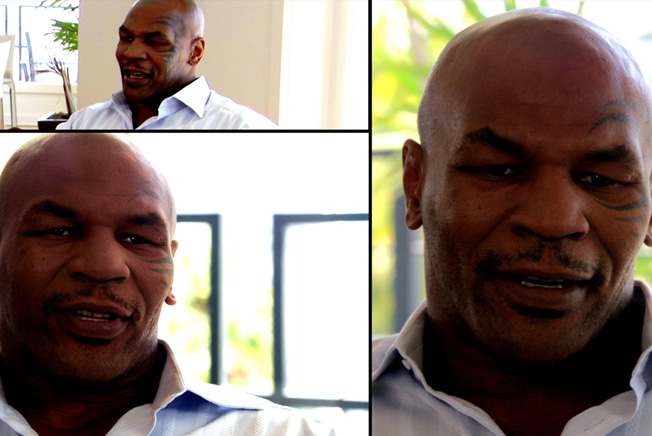 Former heavyweight boxing champ Mike Tyson has led a controversial life, winning all the kudos of his profession, doing prison time for rape, married to and divorced from actress Robin Givens, banned from the sport and fighting bankruptcy (after earning over $300 million during his career). Filmmaker James Toback recorded 30+ hours of video interview with the man and combined it with action-packed archival footage of his many fights to show the life through the eyes of “Tyson.”

Writer/director James Toback ("Black and White," "Harvard Man") met Mike Tyson over two decades ago, when he was shooting "The Pickup Artist" and Tyson was the heavyweight champion of the world. Two big egos from two different worlds maintained a friendship over the years (Toback featured Tyson in "Black and White") and the director convinced Tyson to tell his own story to his camera. What results is a fascinating portrait of a man who is such a bundle of contradictions that he often refutes his own words within the space of minutes. Admire or hate the man, the Mike Tyson Toback and his willing subject present will surprise you. For example, one of Toback's opening gambits is a close-up (most of Tyson's dialogue is shot from shoulders up from a right-hand angle, but Toback changes angles, sometimes offering multiple views at the same time via split-screen, a technique which emphasizes the diverging aspects of the man) of the famously soft-spoken Mike stating that one of the first questions we as humans ask ourselves is 'Who am I?' He then ponders the 'chaos of the mind,' a phrase that in and of itself I wouldn't have expected to hear from Tyson, let alone his consideration of it. (In a post film Q&A, Toback related his famous Harvard LSD experience and his resulting state of mind, then went on to describe how Tyson hears voices in his head. It is this, he says, that draws the men together. Basically Toback said that he is crazy and it takes one to know one.) It is strange to hear Mike talk about how he was bullied and robbed as a kid on the streets of Brooklyn. The first fight he won was based on his rage when some thug killed one of the pigeons he kept on the roof. He began fighting back and criminal behavior more for the thrill of outsmarting people and we hear this sentiment again later when he describes his boxing technique - 'It's not the power, it's the accuracy of the power.' At the age of 12, Tyson claims he was falsely accused of robbing a prostitute, but getting sent to the pen proved to be a big break. It was there that Tyson met Irish Bobby Stewart, the man who got him into boxing and who sent him to Cus D'Amato when he got out at the age of sixteen. Like a star who does his best work with one director, Mike Tyson responded to Cus D who became not only his manager and trainer, but a father figure. One can see that Tyson thinks his life may have gone differently had D'Amato not died just as Tyson's career was exploding. Tyson's view of women seems shaped by his youth as well. He considered his mother promiscuous and becomes downright venomous when discussing Desiree Washington, the Miss Black America who he was convicted of raping ('I may have took advantage of women before, but I never took advantage of her.'). He claims to like strong women, but adds that he likes to conquer them sexually. And yet when he speaks of his first, publicly combative, marriage to actress Robin Givens, he seems almost tender. 'We were just kids, just kids' he says softly, shaking his head with regret. Toback obviously uses a lot of match footage (much of which was used in Barbara Kopple's 1993 television documentary "Fallen Champ: The Untold Story of Mike Tyson"), and Tyson's crazy patchwork career, from his 8 second KO at the Olympics and the incredible run of title wins which followed through the 1997 ear-biting of Evander Holyfield (in which we hear about the illegal head butts which precipitated it) to his 2005 retirement. He had an infamous relationship with Don King ('Don King would kill his mother for $1.') who he sued, winning what he describes as 20-30 million, 'some small amount of money.' This, of course, from a man who managed to burn through $300 mil. And so, we have a Mike Tyson who claims to love women, but wants to dominate them. A man who speaks fondly of two ex-wives. A man who can contemplate the essence of being, then turn around and wonder that a parade was thrown for him in Moscow because 'they don't even speak English over there!' A boxer who may have been the consummate athlete yet let it all slip away (and who, surprise to me, modeled himself on Jack Dempsey). Tyson obviously lost his way in about every direction, but today admits he has only himself to blame. He seems like a man at some kind of peace, a man who wants to be a good father to his children. He seems like someone you might have an interesting conversation with. Toback keeps himself out of the picture and doesn't follow every angle to the most satisfying conclusion (the rape case isn't given much shrift and Tyson's decision to go with Don King isn't prodded), but he sure gives us a Mike Tyson to reconsider.

A la Errol Morris and his Oscar-winning “The Fog of War” with former Secretary of Defense Robert McNamara, helmer Toback gives Mike Tyson, with his Maori warrior face tattoo, sole and center stage to tell his side of his life’s saga. A deft combination of Tyson telling his story, his boxing matches and the media view from the day makes this a left-right combo punch that hits the mark for both boxing and documentary fans. It is even better if you are both, like me. This is not just a talking head docu, though, as the filmmakers use energetic editing, incorporating multi screen images to move things along at a brisk, not hasty, pace that made me want more when the credits roll. The films simple but adroit construction is put to good use to let Mike Tyson tell his tale. There has been a lot of backlash by those accusing the boxer of lying, but that is not the point of this Tyson-Toback collaboration. It is Tyson’s story, truth or not, from his viewpoint and that is what we get.