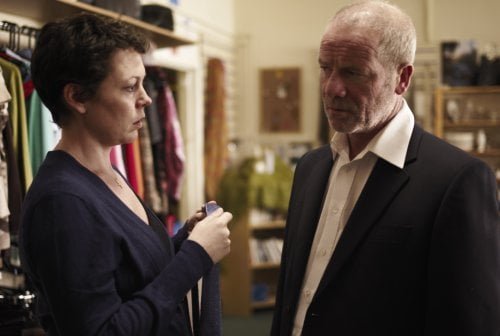 Joseph (Peter Mullan, "War Horse") is an alcoholic widower consumed with rage. When he picks a charity shop to hide out in, he meets the religious Hannah (Olivia Colman, "The Iron Lady") who tries to help him. Joseph doesn't make things easy for her and does himself no favors when he makes assumptions about her background. As it turns out Hannah's situation is more nightmarish than his and Joseph's salvation lies in helping Hannah find hers in "Tyrannosaur."

Brace yourself for a harsh dose of reality in one of the premiere examples of what is being dubbed the New British Miserabilism. The feature directorial debut of writer/director Paddy Considine ("Dead Man's Shoes") is based on his BAFTA winning 2007 short film "Dog Altogether" (which also starred Mullan and Coleman) which, in turn, was based on memories of his father. Considine equates the denizens of a Leeds housing estate with caged beasts and Mullan's performance is beautifully calibrated - a snarling, dangerous surface hiding the loyalty and affection which can be found underneath. Considine doesn't pull any punches. In his opening scene, Joseph leaves the local pub and kicks his beloved dog's ribs in (animal lovers may have a hard time with this, but violence towards animals is suggested - humans aren't so lucky). After his outburst, he strokes the dog's face and carries it home in his arms, but the damage has been done. (As if in recompense, he's attacked by three young men at the freshly filled grave the next day, kicked down and left unconscious.) These conflicting behaviors are also apparent, if reversed, with Hannah. She's clearly rattled by this man who hides behind a rack of clothing, swearing at her suggestions. She approaches cautiously, as if dealing with a wild animal, and coaxes Joseph out. She prays for him and he's calmed, but when he returns the next day, it's the snarling, snapping version who attacks her beliefs and his idea of her middle class life. At this point, Considine shifts our POV from Joseph to Hannah and there is a surprising commonality - she drinks alone too. Hannah's reasons, though, are external rather than internal - her husband James (Eddie Marsan, "Happy-Go-Lucky") is both emotionally and physically abusive. Once Joseph sees the evidence of this for himself, things begin to change. Considine tells his tale without much in the way of cinematic flourish (at one point, the looming shadow of a dog extends from behind Joseph as he sits on his couch), but his direct style and the performances he's elicited from perfectly cast actors are powerful. Mullan's just made for this role and Coleman is extraordinary, playing honestly into her costar's point of view before revealing her own very different one (and then, at her weakest point, echoing Joseph's memories of his wife). The dogs in the film are almost representative, with Joseph's a potent reminder of his wife and his neighbor's obnoxious boyfriend Bod's (Paul Popplewell, "The Trip") a stand-in for himself - the film's most significant truth comes when Jospeh tells Pod's pitt bull that 'it's not your fault.' The canine trilogy includes James, whose fate lies with theirs even if we never learn whether his behavior was bred from the same stock. We do not get an explanation for the titular Tyrannosaur until the film's third act, when Joseph opens up about his relationship with his deceased wife, a diabetic, a 'big girl,' whose footsteps on the stairs caused his tea to shimmer like that puddle in "Jurassic Park." It's a nickname, but one dosed with a cruelty that loads its author with guilt. To Considine's credit, Joseph's recollections remain harsh even as he relates them through repentant eyes. The best to be seen in the man comes through his relationship with his neighbor's son Sam (Samuel Bottomley), a boy Joseph recognizes is threatened by the beast. There are a few quibbles. James's motivations are unclear and a subplot about a dying friend's of Joseph exists to provide a line of insight into his past and a couple of connective plot points. The film's climax is taken further than need be with a visual that takes Joseph into Colonel Kurtz territory. But this is a strong film with effective tech work all around (makeup especially should be noted). Paddy Considine's feature debut is a well orchestrated howl at the moon.