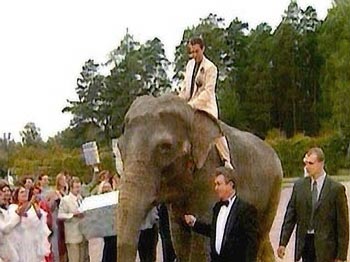 The end of the cold war brings sweeping changes to the former Soviet Union and former academic Plato Makovsky (Vladimir Mashkov, "Behind Enemy Lines") evolves into an oligarch in "Tycoon: A New Russian."

An epic tale based on the life of billionaire businessman Boris Berezovsky, "Tycoon" is structured like "Citizen Kane" but never gets into the heart and mind of its protagonist. It is an interesting albeit stippled look into the corruption that ran rampant after the fall of communism and the sheer complexity of the far-reaching story may make it difficult to follow for those that were not there to experience it. Makovsky weaves his way through a horde of press all demanding comments on charges of corruption with his corporation Infocar. Moments later, reports begin to come in via those same journalists that the entrepreneur was assassinated by tank missiles fired at his car. Enter Chmakov (Andrei Kraso), a rural judge brought in to investigate the case who visits Makovsky's business partners and associates. Director Pavel Lounguine ("Taxi Blues"), who wrote the screenplay with Alexandre Borodianski and Yuli Dubov (who also adapted the book "The Big Slice" by Yuly Dubov, director of Berezovsky's LogoVaz auto company), uses each friend and associate as a springboard for a flashback, which progress from a more innocent time in 1988. The offer of a vodka bottle at Plato's funeral after a bomb has been defused prompts the observation that 'Plato once drank from the bottle' and the recollection of how the old group, Plato, Viktor (Sergei Oshkevich), Larry (Levani Uchaineshvili, "The 25th Hour"), Moussa (Alexandre Samoilenko) and Mark (Mikael Vasserbaum) cavorted on a train trip and Plato lured the wife, Maria (Maria Mironova), of another passenger to join their party. Maria would become Plato's long term lover and mother of his child while her former husband, Koretski (Alexandre Baluev, "Proof of Life"), would rise through government ranks and become one of his largest foes. Chmakov visits Plato's Comrade Nina (Natalya Kolyakanova, "Taxi Blues), whose morals eventually led her to denounce Infocar and effectively ended her marriage to Viktor. 'Viktor was a genius but Plato was a rat charmer,' she states before recalling his first big scam manufacturing 150 million brooms - about 8 per household - in exchange for cars (although it is never explained exactly how this works, something a director like Martin Scorcese could have fixed in a 3 minute montage). When thugs from a regional Lada plant demand a cut of Plato's action, Ahmed the Uzbek (Vladimir Golovin) is brought in, beginning their association with the mob. Viktor begins dealing with Colonel Belenka (Vladimir Steklov), a hero of Afghanistan with no legs and symbol of government corruption. Larry uses Viktor's independent move to drive a wedge between him and Plato, and Plato tries to get the upper hand by gaining political control, backing Siberian Governor Lomov's run for head of state. Lounguine makes some strong points in a couple of scenes. Plato explains to Belenka how they will deal with customs by demonstrating a sleight of hand, a short and sweet scene the film could have used more of. A late birthday part recalls U.S. billionaire Forbes's legendary bashes, demonstrating Plato's immense wealth with elephants and llamas and gifts of beauty queens and thoroughbred racing horses. A later hospital visit with beaten childhood friend Moussa brings back the innocence and loyalty of old friendships, although the cause of Moussa's death immediately thereafter is confused. Was Plato responsible? I don't know, nor did I ever get a real feel for what made this man tick or his feelings for Maria. Mashkov looks the part, but supporting players create richer characters. "Tycoon: a New Russian" is a large scale Russian/French production, but there is nothing cinematically memorable about it. It would be a hard sell with subtitles, but this would probably work better for American audiences as a miniseries of twice the length on the small screen.