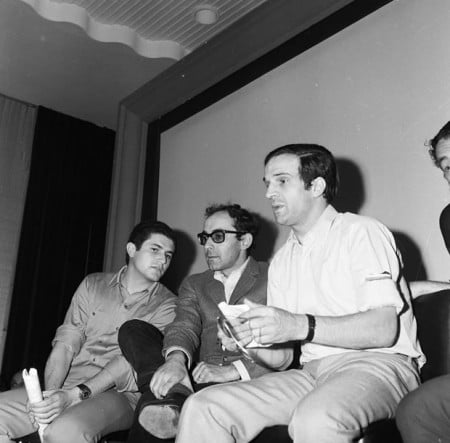 In the 1950's, Parisian film journal Cahiers du Cinema was putting the concept of auteurism on the map, championing directors like Howard Hawks and Nicholas Ray with a fresh critical eye. Five of the magazine's writers would go on to become directors themselves, jump starting the French film industry with their Nouvelle Vague. The first of these was François Truffaut, whose "The 400 Blows" took the 1959 Cannes Film Festival by storm. His good friend, Jean-Luc Godard, followed, breaking all the rules with "Breathless." They were "Two in the Wave."

This documentary from director Emmanuel Laurent is a cinema buff's dream that, while flawed, not only boasts some great content but the unusual idea of 'starring' Isild Le Besco ("À tout de suite"), a budding director herself, as a cinema student who 'guides' us through the material. Anyone who is interested in French cinema should find some little nugget to mull over from this treasure trove of film clips, old footage, critical musings and interviews new and old. After filling us in on how Cahiers evolved (Le Besco leafs through several old issues), we learn that Truffaut's rantings about the state of cinema were so radical he was banned from the Cannes fest in 1958. Incredible then, that the following year his film took the fest by storm. When we learn that Truffaut, who came from a hardscrabble background that included a stint in prison, and Godard, the son of well to do intellectuals, bonded over an infamous French crook of the time, suddenly he's right there in front of us in their films (particularly in "Breathless"). They also shared the actor Jean-Pierre Léaud, who gets his own spotlight in this film, although Léaud admits to never really being able to shed the character of "Antoine Doinel," Truffaut's alter ego. (In a real oddity, we see a film clip from a Truffaut short where he used Godard's "Breathless" star, Jean-Paul Belmondo, and was forced to dub the actors lines when he was unavailable to do so himself.) Laurent follows the two directors through their joint support of Henri Langlois after his firing from the Cinémathèque Française in 1968, when France was in political upheaval during the student riots (the documentary "The Phantom of the Cinémathèque," about Langlois, would be a great companion piece to this). Ultimately it would be politics which would turn Godard and Truffaut against each other. Laurent returns here and there to other members of the New Wave. We learn that Eric Rohmer and Jacques Rivette actually were the first to put their ideas on film in shorts, for example. Oddly, though, while we hear about Truffaut's extensive writing on Hitchcock, there is no mention that it was Cahiers colleague Claude Chabrol who became known as 'the French Hitchcock.' The director moves onto criticism of the former critics, stating that Andre Bazin was fresh because he looked for patterns in filmmaking. While a narrative voice describes the difference between popular vs. intellectual film criticism styles, the director shows us a movie theater, where Le Besco is seated on a red-cushioned chair alone in the auditorium. As the monologue wears on, she's moved about the theater in Godardian jump cuts, even after she has fallen asleep! Later, a tracking shot of her walking along a wrought iron fence could have come straight out of Truffaut. We learn how the filmmakers learned from other filmmakers. A clip of Bergman's "Summer with Monica" is shown as an example of influence on how to shoot women. This one segment, though, illustrates two of main problems with Laurent's doc - he allows his film clips to go on forever and he doesn't show enough cause and effect in his subjects' work. "Monica's" example leads into a Truffaut shot - of Jean-Pierre Léaud! - not a good example of a woman. Although the film begins with a lot of information on Truffaut, it seems more weighted towards Godard in its latter half. There's a great old piece of footage of Godard interviewing Fritz Lang (actually wearing a monocle!), where he explains how he admired Welles and Rossellini as risk takers. And clearly Godard believed in risk - "Breathless" may be considered a classic now, but in ignoring the rules of cinema he confounded audiences of the time - there's a great montage of cinema goers expressing their views on his film outside the theater that is both funny and illuminating. "Two in the Wave" is a look at two influential directors who began together and took divergent paths. The documentary's structure goes two different ways as well as Laurent uses a unique device in Le Besco to string together his themes but falls down when it comes to using more conventional filmmaking tools like editing in a film clip. It's well worth getting over some of those rough bumps, though.