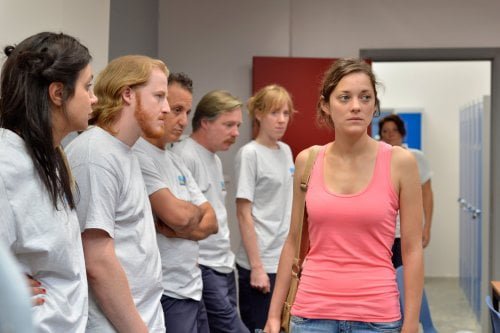 Sandra (Marion Cotillard) is at a crossroad in her life. She is losing her factory job so the company can give bonuses – much needed bonuses – to the other employees and is depressed and despondent. Her husband convinces her that she needs to go to each of her fellow workers to plead her case – give up their bonus to save her job in just “Two Days, One Night.”

Sandra (Marion Cotillard, "Inception"), who's been suffering from depression, is ready to return to her job at a solar panel plant, but she's informed that her coworkers have voted to close her position in return for a bonus. After convincing her boss, M. Dumont (Baptiste Sornin, "The Kid with a Bike"), that their supervisor Jean-Marc (Olivier Gourmet, "The Son," "Grand Central") may have unduly influenced their decision, he agrees to a second ballot. Sandra's husband Manu (Fabrizio Rongione, "The Kid with a Bike") convinces her to plead her case with her colleagues over the course of "Two Days, One Night." Writer/directors Jean-Pierre and Luc Dardennes take their genre of humanistic looks at the lives of those struggling economically to make a work on an entire community. Seventeen very different people must wrestle with the decision of helping one of their own, a person whose performance may have suffered due to her illness to boot, instead of getting much needed cash. Cotillard, with her great, sad eyes, is terrific as the central character, a woman still taking too many pills to get through her days, who must overcome her embarrassment of having to ask for people's support. Some avoid her, others are sympathetic, but blunt about their need for money. One visit turns into a rescue mission while a meeting at a laundromat is surprisingly moving. And the Dardennes find the perfect way to resolve the situation with a surprising turn of events. By the end of "Two Days, One Night" we've not only met an unusual heroine and her dynamic husband, but feel like we've gotten to know a small French town whose denizens offer various shadings of a simple moral issue with complex ramifications. Grade:

The Dardenne brothers, Luc and Jean-Pierre, write and direct a well-crafted little film that deals with big, though personal, issues. Cotillard’s Sandra is a microcosm of working class society in Belgium. She is at the bottom of the barrel, suffering, still, from the depression that forced her to take a leave from her job. But, it is that depression that put her job in jeopardy in the first place. It is a vicious circle for the fragile woman, who has to make her case one fellow worker at a time. The story, which spans the titular time frame, is filled with tension as Sandra must change the minds of the 13 other employees. She is kind of like Henry Fonda in Sidney Lumet’s “12 Angry Men” where he had to convince the 11 other jurors that a boy on trial for murder just might be innocent. Sandra has to make her case that she deserves to keep her job at the price of their much needed bonuses. The responses range from sympathy by some to a cold rejection by others. The Dardennes craft an interesting slice of life that is not wrought with dramatic flair. It is a straightforward, personal tale and one that, in uncertain economic times in Europe, hits a note for many.