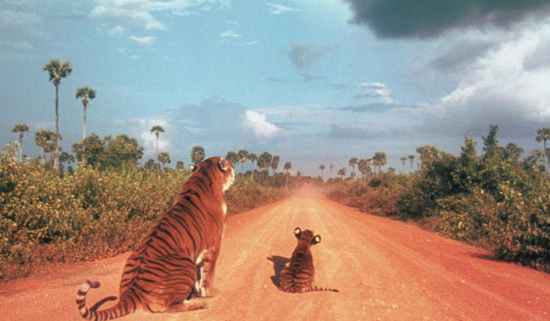 The Great Tiger surveys his domain amidst the ancient human-built ruins of French Indochina. He hears the beckoning call of the Tigress nearby and the pair performs their courting ritual. Two cubs are soon born and the little family carries on an idyllic life – until man encroaches upon them, destroying their home and killing the father of “Two Brothers.”

Big game hunter, author and plunderer of Asian antiquities Aidan McRory (Guy Pearce, "The Time Machine") shoots a tiger to save one of his men, he discovers a cub cowering beneath its father's body. McRory becomes fond of the little cat, but he is separated from it when the village chief (Jaran Phetjareon) who has accepted cash to turn a blind eye to his statue theft double deals and turns him in. Aidan will rediscover Kumal caged as the man-eater of Zerbino's (Vincent Scarito) circus, but it is not until much later that he discovers the parallel story of a young French boy, Raoul (Freddie Highmore, the upcoming "J.M. Barrie's Neverland") who loved another baby cub. Unbeknownst to McRory, he had split up "Two Brothers." Director Jean-Jacques Annaud returns to the nature drama of 1988's "The Bear" with this conservation-minded family tale. Parents should be warned that he exercises serious misjudgment in showing a small child approach and kiss a grown tiger, but, except for this one severe lapse, Annaud's message is pure. The baby tigers are conceived in a temple ruin in the jungles of Cambodia and begin their lives in the sacred natural splendor of the place. Kumal is the more inquisitively aggressive of the two while Sangha hangs back. It is this difference in their nature that causes them to be separated as colonial looters approach their home - mother grabs the weaker Sangha while Kumal stays with dad. Mother tries to rescue Kumal, but villagers chase her off with fire and the chief receives more money selling the cub to the circus. While Zerbino is patient with the baby tiger, his performer Saladin (Moussa Maaskri) uses more brutal tactics to break Kumal and get him to perform tricks. Meanwhile, regional governor Eugène Normandin (Jean-Claude Dreyfus, "The Lady and the Duke") frees McRory from prison to use the hunter for his own ends. Normandin is toadying to His Excellency (Oanh Nguyen, "Clockstoppers") in order to build a road to bring tourism to the temples and so arranges a big game hunt where McRory will ensure that the royal bags a tiger. That tiger is Kumal and Sangha's mother, but while she escapes with a bullet hole through the ear, Sangha is left behind and discovered by Normandin's son Raoul. Sangha becomes a beloved pet until he attacks Mrs. Normandin's (Philippine Leroy-Beaulieu, "Vatel") yippy dog. The Normandins tell Raoul that Sangha is being turned free, but he is really sent to the Asian royal where he is trained to be a fighter. More cash is changed hands when His Excellency wishes to put on a tiger fight for the entertainment of his fiancee Paulette (Stéphanie Lagarde) and the two brothers are pitted against one another. They are recognized by both McRory and Raoul and, to both of their delight, the animals recognize one another and engage in play before escaping and making headlines with their local mischief. As the animals are unafraid of humans, they are feared as man-eaters and McRory is engaged to hunt and destroy them. Jean-Jacques Annaud and his writing partner Alain Godard ("Enemy at the Gates," "The Name of the Rose") have created a dual fable reminiscent of the tales of Kipling. This turn of the century story balances man's ability to destroy for financial gain against his better instincts to preserve our natural and historical riches. This conflict plays out within Aidan McRory, who is further influenced by Naï-Rea (Maï Anh Le), the local woman he falls in love with. She is the daughter of the village chief and the two generations stand for the opposing themes, just as the compassionate animal trainer Zerbino is paired with the cruel Saladin. Colonialism is clearly charged for the exploitation of less developed lands. But "Two Brothers" is really about the tigers and Annaud and his cinematographer Jean-Marie Dreujou ("Man on the Train") masterfully capture these animals in play and in close proximity with humans. The Two cubs, with big white marks on the backs of their ears that look like spotlights, humorously interact with other animals, behaving just like kids. Kumal has a fondness for the honey drops McRory keeps in a tin. Sangha hides out with Raoul's stuffed animals just like "ET." When the animals are ripped away from their home, then mistreated as adults, Annaud gets you in the gut. Early comical interludes return when the adult tigers reunite and begin to do things like raid the Mekong meat and poultry truck or jump into an unattended bubble bath. The final confrontation between the tigers and McRory is suspenseful and ironic, although once again, the filmmaker should have shown more responsibility in depicting Raoul's interaction with his former pet. "Two Brothers" was filmed in France, Thailand and Cambodia, but while majestic surroundings are captured, a technical issue with the picture transfer causes noticeable blurring in several places. The cast all play their characters with the broad strokes that created them, with Pearce achieving somewhat more complexity as a result of his story arc.