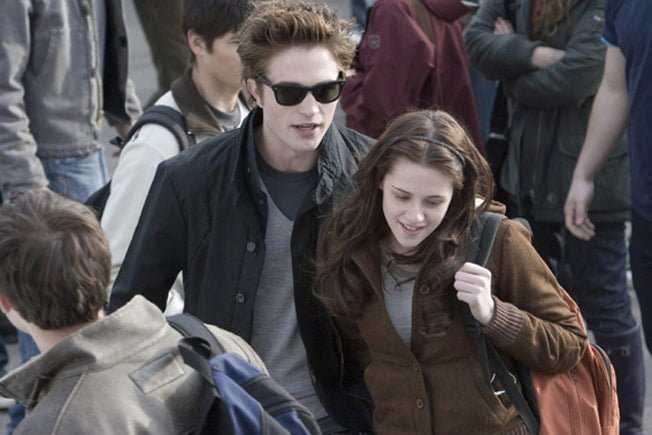 When Bella Swan's (Kristen Stewart, "Into the Wild") mom marries a minor league baseball player she decides to give her mom the freedom to travel and leaves the warmth and sun of Phoenix for the cold and rain of Forks, the Northwestern small town where her dad is Sheriff. She becomes a curiosity at her new high school, but she, in turn, is fascinated by the glamorous Cullens, the strange family of adopted children of Dr. Carlisle Cullen (Peter Facinelli, "Can't Hardly Wait," TV's "Damages"). The stunning Edward (Robert Pattinson, "Harry Potter and the Order of the Phoenix") turns out to be her biology lab partner and quickly becomes her life in the hugely awaited adaptation of the Stephenie Meyer novel "Twilight."

Screenwriter Melissa Rosenberg (SHOtime's "Dexter") has culled a lot of the cruft from Meyer's bulky book without losing its essentials and director Catherine Hardwicke ("Thirteen," "Lords of Dogtown") has translated the trashy uber-gothic romance into something not so trashy. Ok, so if reading about vampires playing baseball sounded kind of dumb, there's not too much the filmmakers can do about that, but on the whole this is one of those rarities where the film improves upon the book. In its demographic, "Twilight" should pull in the same kind of repeat business "Titanic" had. The fans will be insatiable. While Bella is pursued by popular jock Mike Newton (Michael Welch, "An American Crime"), albeit less ardently than in the book, she gets mixed signals from Edward, whose initial reaction to her seems nothing less than utter revulsion. He warms up over a science assignment, then saves her from being killed by another student's out of control SUV with moves that are physically impossible. He doesn't accompany her on a beach trip and when girlfriends snicker (jealously, of course) over his missing presence, the local native American Indians say his family never comes there. Childhood friend Jacob Black (Taylor Lautner, "The Adventures of Sharkboy and Lavagirl 3-D") tells Bella about his tribe's legend implicating the Cullens as supernatural beings. Bella does some Google searching and things begin to add up, unnatural speed, unnatural strength, cold skin...vampire. When she confronts Edward, he reveals his true self, but Bella will not be determined - she is in love. Edward takes her into the Cullen clan, amused that she is more worried about being accepted than being in a house full of vampires, but a traveling pack of bloodsuckers who don't stick to animal hunting like the Cullens do decide to take on Edward to get to the luscious Bella. Robert Pattinson turns out to be the ideal gothic god despite a combination of lighting and makeup that give him more colors than a chameleon (he looks like he's been spackled and trying on lipstick when he first walks into the school caf, yet has perfectly warm skin tones in later closeups). This is a role that would have been tailor made for Johnny Depp twenty years ago, but Pattinson does it proud, resisting the urge to wink at some of the more risible, intact dialogue. In fact, he gives the character all the little nuances that make him more than just a Teen Beat cover, his acknowledgement of the nature of his predicament delivered with amused, self-loathing irony. His conflicting feelings for Bella are well articulated in both steamy looks and body language. Stewart is also perfectly cast as the human who is also an outsider who rejects dancing and sports because of her clumsiness (it is never explained why an Arizona sun worshipper is almost as pale as the Cullens though). The actress is serious, but not earnest, and adept at conveying teenage emotional turmoil with as little as a shrug of the shoulders. The two have loads of chemistry together, creating sparks through the friction of their push/pull relationship (it should be noted that the book's author is a Mormon whose church seriously denounces premarital sex and a principle theme of "Twilight" is sexual control). Supporting talent varies from the fine Billy Burke ("Fracture," "Feast of Love") as Charlie Swan and Facinelli as the almost angelic Carlisle (at one point Hardwicke frames Edward in front of a stuffed snowy owl's wings, eliciting a storm of giggling from the teenaged girls at the preview screening). Anna Kendrick ("Camp") does good frenemy (the snark is toned down) as Bella's would be rival for Mike, Jessica Stanley and Ashley Greene is the right balance of friendly and offbeat as Edward's sympathetic sister Alice. Very notable is Jackson Rathbone as the 'newest' Cullen Jasper - the actor interprets the role as vaguely startled and it works. Nikki Reed's ("Thirteen") anti-Bella Rosalie is vaguely annoying though. Edi Gathegi ("Gone Baby Gone") is charismatic as the rogue vampires' Laurent, but as the tracker James Cam Gigandet ("Never Back Down") doesn't have the sinister romanticism of a master. The two mothers, Bella's Renee (Sarah Clarke, "24's" Nina Myers) and the Cullens' Esme (Elizabeth Reaser, "Sweet Land," "The Family Stone"), have little to work with to establish strong personalities. Watch for author Meyer as a counter customer in Forks' diner. To her credit, Hardwicke punches the violence of the vampires so that one feels real power on screen. Stewart really relays the anguish and shock of a broken leg and vampire venom in the film's climatic scene, which also features a pretty hair raising vamp fight. The director also plays to teenage girls almost with tongue in cheek - parents may realize a field Bella and Edward lie in is impossibly rich with wildflowers. Effects of vampires covering vast distances in unreal time and leaping about treetops is done as effectively as it could without the benefit of flapping capes. The Coen brothers' regular composer, Carter Burwell, knocks the score, including 'Bella's Lullabye,' out of the park and the Emo soundtrack, which includes Paramore and Muse, should sell like hotcakes. Unlike the "Harry Potter" series, which began generically and worked its way through a series of increasingly indie directors to find its tone, the "Twilight" series appears to be in capable hands right off the bat. The film ends with a number of allusions to future events while still wrapping neatly with the dreamiest of prom dates. "Twilight" may be the most surprising book to screen adaptation since Clint Eastwood tackled "The Bridges of Madison County."