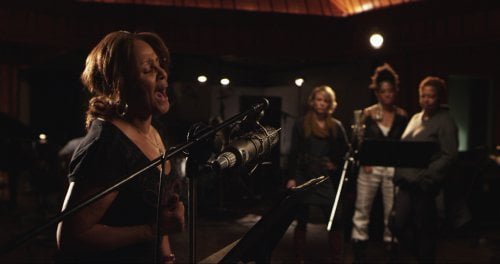 We have heard their melodious voices for decades but their talents have always been overshadowed by the stars they back up on stage. From the Supremes with Diana Ross to the Raelettes with Ray Charles and the Ikettes with Ike and Tina Turner, they have been the vocal powers behind the throne of fame and always “20 Feet from Stardom.”

They usually start in church choirs. They usually have more powerful voices than those they are accompanying. Their work is sometimes accredited to others and they are proof that talent alone rarely means success in the music industry. They don't refer to themselves by the label everyone else applies to them and their life's work often places them "Twenty Feet from Stardom." Director Morgan Neville not only shines a spotlight on five of the best backup singers in the industry, but breaks down the reasons why those who've attempted solo careers haven't been successful. If you think the music industry is based on talent, think again, because some of the most dynamic singers in the business are virtual unknowns (I personally have long supported an incredible singer/songwriter from upstate New York - Happy Rhodes - who has often been compared to Kate Bush, yet has only ever achieved a cult following.) The film is chock full of music which is more well known for its da-doots and soaring accompaniments, things like "Walk on the Wild Side" and the Stones' "Gimme Shelter." For the latter, we hear from both Mick Jagger, who describes how a woman came in in the middle of the night in a coatdress and curlers to blow the roof off his 'Rape! Murder!' chorus and from the singer herself, Merry Clayton. Jagger and the Stones have used three of Neville's five main subjects, an affair hinted at with former Ikette Claudia Lennear and the documentary's most extraordinary performer, Lisa Fischer, a regular on their concert tours since 1989. Darlene Love, who performed with the The Blossoms, was actually the uncredited lead on The Chrystals' 'He's a Rebel' and a Phil Spector Christmas compilation track 'Christmas (Baby Please Come Home),' which David Letterman has featured as a live holiday performance with Love since 1986. Love expresses her frustration with Spector, who seemed determined to keep her in the background as part of his 'wall of sound,' until she finally quit and ended up cleaning houses to make a living. Love has since gotten the most individual success, having been inducted into the Rock and Roll Hall of Fame in 2012. Neville also highlights Tata Vega and Judith Hill, the latter an Asian artist hoping for a solo career. She was to have shared the stage dueting with Michael Jackson on his huge comeback tour which never happened. There are plenty of others, like Janice Pendarvis, Lynn Maybry and Dr. Mabel John, now a preacher. The Waters Family has been successful not only singing backup for Michael Jackson and Donna Summer, but in doing sound effects work for "Avatar," vocal work for Disney movies and even the well known 'It's a Small World' theme park song. There are lots of stars to be seen here too - George Harrison, Sting, Stevie Wonder, David Bowie. Bruce Springsteen is interviewed, yet oddly, his marriage to backup singer Patty Scialfa is never mentioned. And that's one of the frustrations of this documentary - female singers of color are the focal point, white backup singers described as the 'old school' vanilla style they revamped. Yet there are several we don't hear enough from here, like Sting's jazz vocalist Jo Lawry and a male talking head whose name I didn't even catch. "Twenty Feet from Stardom" isn't a perfect documentary, but it's the first on its subject and it's an eye-opening look at the unheralded talent who've made music history.

Longtime documentary filmmaker Morgan Neville, with “20 Feet from Stardom,” explores that previously unseen world of background singers from the early days, when backup singers were homogenized and white, to the present day as the current flock of backup singers try to find that elusive fame. Neville interviews some of the best unknown singers of the past and present years – Merry Clayton, Darlene Love, Lisa Fischer, Gloria Jones, Claudia Linnear, Judith Hill and more – to tell us of their struggles to achieve stardom, which proves an elusive goal for most in the fickle music industry. The backup singers that are named – The Blossoms, The Crystals, The Ikettes and Raettes and others – are the basis of my first interest in music, the R&B from the 1950s and 60s when music had a pure quality about it. Just think about the powerhouse voices behind Ray Charles as the Raettes belt out “Hit the road, Jack, and don’t you come back no more, no more, no more, no more. Hit the road, Jack, and don’t you come back no more.” (“What you say?”) Front of the band stars - Bruce Springsteen, Stevie Wonder, Mick Jagger, Bette Midler, Sting, and Sheryl Crow (a former backup singer turned star) - join the array of backup singers from the past decades. These icons of music, who have kept the role of background singer alive into the new Millennium, talk about how important their singers are to their music and about the tough life on the road they take to their hoped-for success. This is not just a talking head documentary (though the Talking Heads, themselves, participate in the film). The rich Rhythm and Blues music of rock’s early days is the best of the best. Unfortunately, in the 70s and 80s, the Whitney Houstons of the world watered down the much hipper songs of Phil Specter, the man who made the backup singers the focus of his music for 20+ years. One problem, a telling one, is, at only 89 minutes, “20 Feet from Stardom” is too long. There is a beautiful conclusion about 10 minutes before the film actually ends that would have made the film tighter and better. Instead, filmmaker Neville clutters the finish with a tacked on epilogue that drained the film of the wonderful life it had built up to.