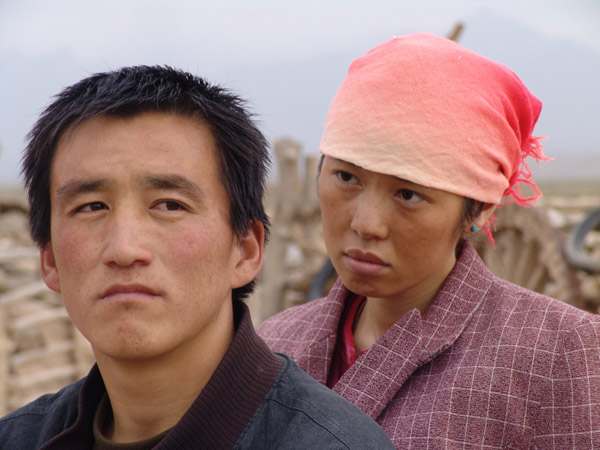 It is a tough life for a woman living in remote Inner Mongolia with a crippled husband, Baoter (Ba Te Er), two children, a meager goat herd and little water. When Tuya (Yu Nan) collapses in the field during a day’s hard labor, she learns that she, too, could end up debilitated and useless with long-term lumbar failure. The little family’s only hope is for the husband and wife to divorce and have her find a new suitor who will care for them all in “Tuya’s Marriage.”

Just before the American invasion of Iraq on the border between Iran and Turkey, a young boy with an entrepreneurial spirit nicknamed Satellite (Soran Ebrahim) trades in land mines and satellite dish installations in order to care for scores of homeless kids. Satellite's smitten when a girl from Halabcheh, Agrin (Avaz Latif), enters his realm, but he'll never know her bleak background nor expect the outcome of her older brother's premonitions in writer/director Bahman Ghobadi's ("A Time for Drunken Horses," "Marooned in Iraq") 2004 San Sebastian Golden Shell winner and Iranian submission for the Foreign Language Film Oscar, "Turtles Can Fly." Iranian filmmaker Ghobadi brought to light the numbing poverty and harsh lives of Kurdish children in his first film. In this, the first movie filmed in Iraq following Saddam's fall, he once again shines a light on forgotten innocents growing up amidst conditions Westerners could barely fathom. Young Satellite moves 'his' kids around like an army commander, along with right-hand man Pashow (Saddam Hossein Feysal) and adoring adjunct Shirkooh (the adorable Ajil Zibari). Barking commands and screaming deals (yet always showing concern for his charges), Satellite moves about the adult world with ease. Pashow also moves, quickly - so quickly in fact that you may not notice at first his shriveled leg and crutch. Many of these kids matter-of-factly deal with horrible wounds from previous wars and land mines. We first see Hengov (Hiresh Feysal Rahman), Agrin's brother, dismantling a land mine with his mouth - he's lost both arms - and when Satellite believes he's called him a liar, Hengov just head butts the sputtering kid. Satellite's attempts to woo Agrin ('I am at your service') give Ghobadi's film some comic charm, but it is upon Agrin that the film's mood takes a dark turn when we discover that the baby, Riga (Abdol Rahman Karim), she always carries on her back is not her younger brother, as Satellite believes. While Satellite will never understand why his courtship is spurned, his gung-ho perception of the US takes a late turn, perhaps the culmination of Hengov's last prediction. (Hengov's most tragic vision gives the film its title.) Once again, the director obtains truthful and moving portrayals from his young, non-professional cast. Avaz Latif has the look of a budding great beauty already marked by the harsh environment (the violin score the accompanies her appearances from Satellite's point of view deepens her melancholy mystery). Her face is frequently the focal point of some of Ghobadi's more arresting images. His story has elements of comedy (Satellite's dealings with the elder Esmaeel, who holds his bike in ransom in order that he will translate CNN), fable (Shirkooh presenting Satellite with 'Saddam's arm' from the famous fallen statue), symbolism (red fish in a pond, whose meaning is a mystery on these shores), dramatic suspense (Satellite going in to rescue Riga from a mine field), political commentary and tragedy. Not every element of "Turtles Can Fly" may be immediately understood by Western audiences, but the circumstances of its children and Ghobadi's poetic presentation of them cannot fail to move.

What is it with film’s coming out of Mongolia, lately? We have had, in the past several years, “The Story of the Weeping Camel (2003)” and “The Cave of the Yellow Dog (2005),” and, now, director/co-writer Quanan Wang’s beautiful drama, “Tuya’s Marriage.” These three films hold much in common with their stories of surviving the harsh, fast encroaching Mongolian desert, vast panoramic views of the austere, yet magnificent, landscape and non-existent budgets that belie the fine film artisanship and solid story telling. Tuya is no stranger to hard work and she uncomplainingly takes to heart her role as the family’s sole provider. But, that hard work has taken its toll on her and her decision to divorce and remarry is based on practicality. Although she and Baoter are no longer married, she still resolves to care for him or let the suitors be damned. Things appear to take a positive turn when a wealthy oilman, Tuya’s childhood friend, agrees to her terms ­ almost. Things end in near tragedy. Meanwhile, Tuya has had a long time platonic friendship with Shenge (Sen Ge), a man who has been cuckolded more than once (much more) by his selfish, uncaring wife. Shenge has secretly been in love with Tuya but, since both are married, has always behaved properly. When his wife leaves him yet again, Shange vows to complete excavation of the water well that lost Baoter his legs. Doing so, he discreetly announces his intentions toward Tuya and that he will get divorced. The love story that ensues is quite touching. The wonderfully complex screenplay, by Wang and Wei Lu, is leavened and livened with drama, romance, humor and the stalwart integrity of the hearty Mongolians. The feeling of life on the steppe is carried forth with precision as we see the traditional ways being overwhelmed by modern technology. This clash of cultures is handled with great good humor in one scene, in particular, when two sets of suitors cross paths to in their quest to woo Tuya. I am always amazed by the craft and quality of the films that emanate from such remote places as the rugged mountains of Iran and the vast remoteness of Mongolia. It shows the dedication of filmmakers like Quanan Wang who are able to put forth their vision with what would be a mere pittance in Hollywood. Tuya’s Marriage” is a poster child promoting quality independent film from abroad.