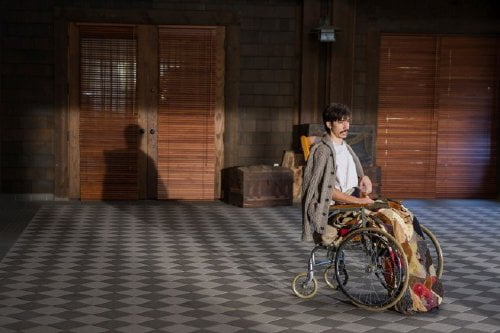 Wallace Bryton's (Justin Long, "Drag Me to Hell," "Going the Distance") girlfriend Ally (Genesis Rodriguez, "Identity Thief") thinks he's changed since his Not-See Party podcast hit it big, but the change he's about to undergo when he makes a diversion to a remote Manitoba manse in search of a story will be far more shocking in "Tusk."

Just before the American invasion of Iraq on the border between Iran and Turkey, a young boy with an entrepreneurial spirit nicknamed Satellite (Soran Ebrahim) trades in land mines and satellite dish installations in order to care for scores of homeless kids. Satellite's smitten when a girl from Halabcheh, Agrin (Avaz Latif), enters his realm, but he'll never know her bleak background nor expect the outcome of her older brother's premonitions in writer/director Bahman Ghobadi's ("A Time for Drunken Horses," "Marooned in Iraq") 2004 San Sebastian Golden Shell winner and Iranian submission for the Foreign Language Film Oscar, "Turtles Can Fly." Iranian filmmaker Ghobadi brought to light the numbing poverty and harsh lives of Kurdish children in his first film. In this, the first movie filmed in Iraq following Saddam's fall, he once again shines a light on forgotten innocents growing up amidst conditions Westerners could barely fathom. Young Satellite moves 'his' kids around like an army commander, along with right-hand man Pashow (Saddam Hossein Feysal) and adoring adjunct Shirkooh (the adorable Ajil Zibari). Barking commands and screaming deals (yet always showing concern for his charges), Satellite moves about the adult world with ease. Pashow also moves, quickly - so quickly in fact that you may not notice at first his shriveled leg and crutch. Many of these kids matter-of-factly deal with horrible wounds from previous wars and land mines. We first see Hengov (Hiresh Feysal Rahman), Agrin's brother, dismantling a land mine with his mouth - he's lost both arms - and when Satellite believes he's called him a liar, Hengov just head butts the sputtering kid. Satellite's attempts to woo Agrin ('I am at your service') give Ghobadi's film some comic charm, but it is upon Agrin that the film's mood takes a dark turn when we discover that the baby, Riga (Abdol Rahman Karim), she always carries on her back is not her younger brother, as Satellite believes. While Satellite will never understand why his courtship is spurned, his gung-ho perception of the US takes a late turn, perhaps the culmination of Hengov's last prediction. (Hengov's most tragic vision gives the film its title.) Once again, the director obtains truthful and moving portrayals from his young, non-professional cast. Avaz Latif has the look of a budding great beauty already marked by the harsh environment (the violin score the accompanies her appearances from Satellite's point of view deepens her melancholy mystery). Her face is frequently the focal point of some of Ghobadi's more arresting images. His story has elements of comedy (Satellite's dealings with the elder Esmaeel, who holds his bike in ransom in order that he will translate CNN), fable (Shirkooh presenting Satellite with 'Saddam's arm' from the famous fallen statue), symbolism (red fish in a pond, whose meaning is a mystery on these shores), dramatic suspense (Satellite going in to rescue Riga from a mine field), political commentary and tragedy. Not every element of "Turtles Can Fly" may be immediately understood by Western audiences, but the circumstances of its children and Ghobadi's poetic presentation of them cannot fail to move.