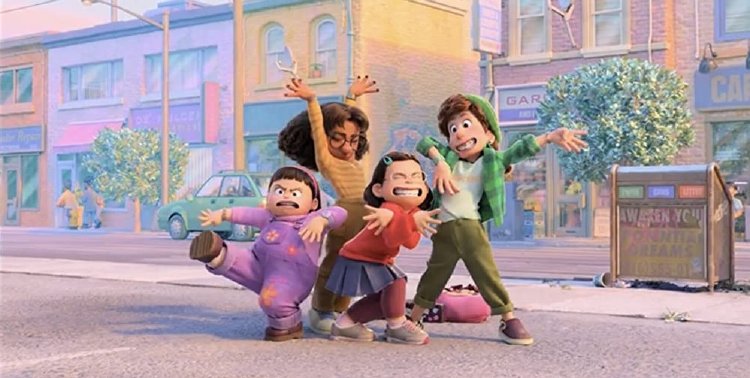 Meilin Lee (voice of Rosalie Chiang) has always been her mother’s perfect daughter, frustrating her more adventurous friends Miriam (voice of Ava Morse), Priya (voice of Maitreyi Ramakrishnan) and Abby (voice of Hyein Park).  But turning thirteen brings about all kinds of changes for the young girl, who not only begins to hide inconvenient truths like B+ grades and drawings of boy crushes beneath her bed, but whose heightened emotions cause her to temporarily assume the mantle of a Chinese red panda.  Her mom Ming’s (voice of Sandra Oh) escalating humiliations means Mei is continually “Turning Red.”

Cowriter (with Julia Cho)/director Domee Shi, who first examined over protective Chinese mothering in her Oscar winning Pixar short 'Bao,’ makes her feature debut in the same arena, this time focusing on the mother/daughter relationship.  It’s a doozy, funny and insightful with some well earned emotion and original songs by Billie Eilish and her brother Finneas in support of 4*Town, the boy band Mei rebels over.   “Turning Red” is the best Pixar movie in over a decade and it is a real shame it’s not being released into theaters.

Mei immediately tells us that the number one rule in her family is ‘Honor your parents,’ and that following it has made her an over-achieving nerd in the eyes of her friends.  She forgoes most after school activities to hurry home and help her mom, who believes she will one day be the UN Secretary General, run their ancestral temple, one of Toronto’s largest, which is open to the public and honors Sun Yee, a woman known for her glorification of the Chinese red panda.

When Abby notices that their favorite boy band, 4*Town, is coming to Toronto, the foursome goes nuts, Mei beginning to hope that there might be some way she might go.  As they walk home from school, Mei is teased about Devon, a 17 year-old convenience store clerk they think looks like one of their idols.  Mei begins to draw him in her journal, but when she leaves it sticking out from under her bed, a moment Shi plays for hilarious suspense, Ming pounces.  And then she drives Mei down to the Daisy Mart to tell the clueless Devon to stay away from her mortified daughter.

Things escalate when Mei locks herself in the bathroom at home, Ming hysterically asking ‘Did the red peony bloom?’  But that is not how Mei’s body is changing right now and she figures out that calm will restore her human self – but with bright red hair that she stuffs into a wool cap.  Things get tricky again in school the next day as mom is spotted hiding outside the classroom before loudly announcing that Mei has forgotten her pads.

Just when you think Shi can’t get any more material out of her premise, she ups the ante, adding a generational layer with Grandma (voice of Ho-Wai Ching) that evolves into a parody of Godzilla taking down the SkyDome.  That she does this while also adding ancestral layers (a quartet of aunties, rising up like Powerpuff Girls) and Ming’s own back story gives the film emotional power.  Sandra Oh’s Ming is perhaps Pixar’s most entertaining vocal performance since Ellen DeGeneres’s Dory and she’s given lovely support by "First Cow's" Orion Lee as her quiet, more reasonable (if somewhat cowed) husband Jin.

The film does have some echoes of Pixars past, its ancestral theme recalling “Coco,” its climax everything from “Inside Out” to “Soul” (and even one ‘fluffy’ line tipping its hat to “Despicable Me”), and Disney seems to have kept its budget tight judging by inert backdrops, but “Turning Red” nonetheless surprises until the end with its bold allegories and genuine insight.

Mei Lee (Rosalie Chiang) is precocious 13-years old and the apple of her very demanding and domineering mother’s, Ming (Sandra Oh), eye. But, she’s at that age where changes come fast and furious and, when she gets angry or upset, she “poofs” into a giant red panda in “Turning Red.”

This latest CGI extravaganza from Disney-Pixar is a treat on many levels. Number one is that it is a terrific young teen coming of age story that deals with – and here is a first for Pixar and animation, in general – a teen girl getting her period. It is also a mother/daughter saga with all the angst that a demanding mom can cause her try-to-please daughter. And, it is a multi-generational tale that brings magic and legend to the forefront of the story, by Julia Cho and Domee Shi, who also directs – the first fully femme-helmed Pixar pic. The importance of friendship also looms large with Mei’s posse – Miriam (Ava Morse), Abby (Hyein Park) and Priya (Maitreyi Ramakrishnan).

Mei’s coming of age challenges are handled in a unique and very funny way, especially when mom misinterprets her daughter’s “problem” and, in true tiger mom fashion, goes overboard buying and buys a whole bunch of feminine-hygiene products. This begins the part of the story that is grounded in its volatile mother-daughter relationship that enters a whole new dynamic.
Mei’s magical dilemma of randomly – because of roiling adolescent emotions – changing into the aforementioned Giant Red Panda (or GRP) is tempered as she learns to control the metamorphosis. This leads her to become a big hit at school and the most popular student.

Aside from all the teen angst, mother-daughter ups and downs and the whole magical aspect of “Turning Red,” there is a more down to earth and pressing issue facing Mei and her gang: how to get tickets to the awesome concert by their favorite boy band, 4*Town. This is a story unto itself.
So, as you can see, Disney-Pixar packs a whole lot into this “second-tier” Pixar move that, to me, stands right up there with the best of Pixar over the decades