Turn Me On, Dammit! 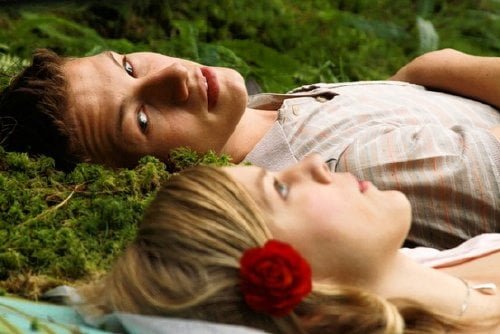 Wwriter/director Jannicke Systad Jacobsen (adapting the Olaug Nilssen novel) achieves the perfect balance of sweet and raunch in this Norwegian coming of age romance that is far more rooted in reality, and, as a result edgier, than what Judd Apatow's doing in the U.S. In no small part, a lot of this has to do with a female protagonist who is every bit as obsessed with sex as her male counterparts. Alma's outspokenness about her desires (she makes little effort to quiet her masturbatory enthusiasm from her mom) verges on going a bit too far until we understand that Alma's a bit different all around and the title demand is about more than sex. Skoddeheimen, Norway, is a small town where everyone knows everyone else and it's despised so much by Alma and her best friend Sara (Mary Lynn Rajskub lookalike Malin Bjørhovde) that they give its welcoming sign the finger every time they pass on the school bus. Jacobsen begins the film with Alma's voiced over observations about her stupid town with its stupid sheep and 'trampoline girls' (their persistence is a hoot). As if to transcend all this 'stupid' banality, the next thing we see is Alma on the bathroom floor insistently pleasuring herself as her dog, Bingo, hangs his head against what he should not be watching. Alma dreams of of her handsome schoolmate Artur in fantasies both romantic and sexual, but when he approaches her alone outside at a party and 'pokes his dick' at her, Alma's problems really begin. That's because Sara's older sister Ingrid (Beate Støfring), constantly wetting her lips with a phallic icy pink gloss, also has her eye on Artur and refuses to believe he'd have an interest in the strange Alma. Alma's anointed with the taunting nickname 'Dick Alma' and no one at school will speak with her. Alma's mom knows nothing of this, only exposed to her daughter's phone sex charges and the accusation from her part time job at the local store (run by Sara and Ingrid's dad, Sebjørn (Jon Bleiklie Devik)) that she stole a porno mag. Things come to a head when Alma cannot take it anymore and hitchhikes to Oslo, arriving at the doorstop of her idol, Sara and Ingrid's older sister Maria (Julia Bache-Wiig, "Reprise"), who, along with her roommates, restore Alma's confidence. "Turn Me On, Dammit!" is full of funny little touches that provide plot payoffs. Alma and her mom's boldly nosy neighbor Magda (Hilde-Gunn Ommedal) turns out to be the one who gives Alma's mom the complete run down on what's been going on with her daughter. The 'trampoline girls' take up the nickname chant. Best of all is the unseen Stig (Per Kjerstad), the positively cheerful phone sex guy who also dispenses advice. The movie also addresses more serious themes, such as school bullying in the form of shunning and Sara's conflict over her love for Kjartan (Lars Nordtveit Listau), convinced that giving in will lead her into a long, boring life as a housewife. The film has a great double gag ending that's in perfect balance with the film's blend of sweet raunch (it's screenplay won the 2011 Tribeca Film "Turn Me On, Dammit!" is as off kilter as its heroine and a delightful breath of fresh air from the land of fog and fiords. Jacobsen has elicited terrific, natural performances from her mostly unprofessional cast.