Turn Every Page – The Adventures of Robert Caro and Robert Gottlieb 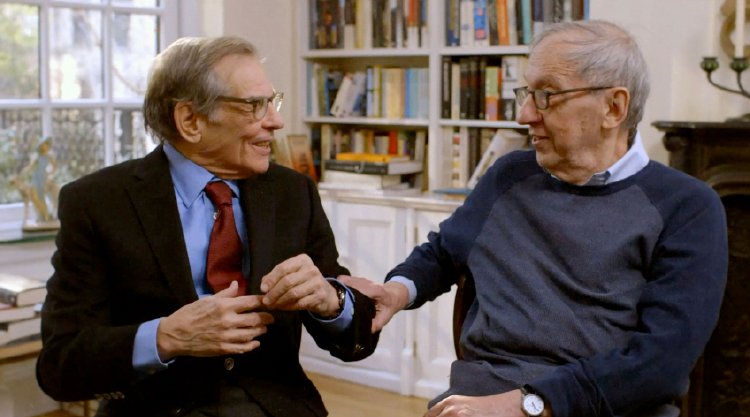 During the pandemic, a book almost 1,400 pages long that is unavailable digitally, weighs over 4 pounds and was published over forty years ago became a phenomenon.  It was the first collaboration between a now respected author and legendary editor, the former now in his late 80’s, the latter over 90, both working furiously to complete their final collaboration.  Their extraordinary histories and enduring friendship is chronicled by the editor’s daughter in “Turn Every Page – The Adventures of Robert Caro and Robert Gottlieb.”

Director Lizzie Gottlieb had a lot of obstacles thrown her way in attempting to portray the relationship between her dad and one of his many famous authors.  For one thing, they refused to allow her to film them working together, declaring their process too private.  And so Lizzie did what she had to, building each of their biographies separately while also building up enough trust to be able to cap off her work with a charming twosome.

That first book was never supposed to be a hit.  Robert Caro has always been interested in power within American politics, believing that informing voters how it works makes for a better democracy.  Yet he didn’t choose a politician as his first subject.  Instead he spent years researching New York real estate developer Robert Moses (movie buffs will recognize the name from Edward Norton’s 2019 film “Motherless Brooklyn”), a fascinating tale shaped to read like fiction by he and Gottlieb that became the enduring best seller ‘The Power Broker.’

The dapper Caro, who still writes on a typewriter producing carbon copies as backup, secured a literary agent, Lynn Nesbit, who believed in his vision and set up lunches with 4 editors.  The first 3 wined and dined him at the Four Seasons.  Gottlieb invited him to brown bag it at his desk and the two just clicked.  After the Moses book, Caro had been contracted to write about LaGuardia, but felt like he’d be covering much of the same ground.  He found an ally in Gottlieb, both of them landing on the same next subject for him, a man who really fascinated him (and would disillusion as much as gratify him), Lyndon B. Johnson.  Johnson became Caro’s revered life’s work, his editor joking he is now working on the fifth volume of a planned trilogy.  Lizzie will bring Caro and his wife back to Texas Hill country where the New Yorkers had transplanted themselves for three years in order to fully understand his subject’s story (and where Caro elicited never-before-told anecdotes from Lyndon’s brother Sam Houston Johnston).

While Caro has had a singular focus, her dad’s life sprawls across a larger canvas.  Robert Gottlieb has edited such great American writers as Toni Morrison, Doris Lessing, Bill Clinton, John Le Carré, and Salman Rushdie and, as he tells his grandson prowling through a bookstore, was the man who changed Joseph Heller’s ‘Catch-18’ to ‘Catch-22’ when they discovered Leon Uris was about to publish ‘Mila 18.’  As if that isn’t enough he is married to NY stage actress Maria Tucci and helps run the NYC Ballet!  Gottlieb, who has been editor at Simon and Schuster, Knopf, and the New Yorker, is also an individualistic collector of such oddities as plastic women’s handbags.

When their stories converge, it is with a mixture of affection and aggravation, contentious fights raging over such things as semicolon use.  Lizzie finally films the duo together, the employees of Knopf amazed to see two legends wandering their work hallways in search of a number 2 pencil.  Caro agrees to let her shoot them working, but only without sound.  We can only imagine, but the portrait is as profoundly moving as it is entertaining.

Sony Pictures Classics opened "Turn Every Page – The Adventures of Robert Caro and Robert Gottlieb" in select theaters on 12/30/22, expanding in January, 2023.