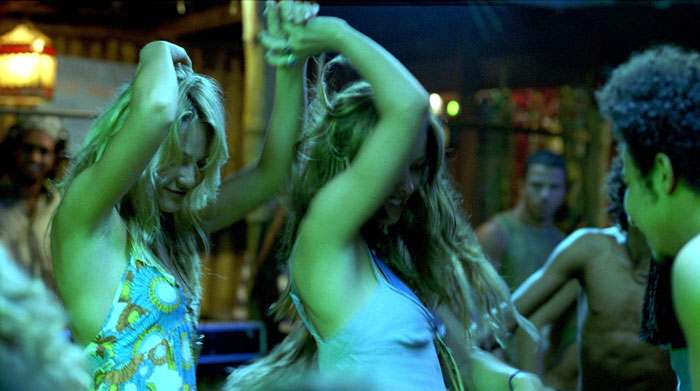 Alex (Josh Duhamel, "Win a Date with Tad Hamilton!"), his sister Bea (Olivia Wilde, "The Girl Next Door") and her best friend Amy (Beau Garrett) are attractive Americans who choose exotic Brazil for their first trip outside U.S. borders. After the bus they're riding in a remote area plunges over a cliff, the twentysomethings meet up with a native speaker, Pru (Melissa George, 2005's "The Amityville Horror"), and a couple of randy Englishmen. While they await the next bus, the shaken group finds its way to a beachside bar that seems welcoming, but they will soon discover the locals have a horrific way of dealing with "Turistas."

Director John Stockwell ("Crazy/Beautiful," "Blue Crush") has some decent films on his resume, so one can only wonder just what attracted him to this hackneyed piece of trash. Must have been the exotic location. Stockwell's underwater filming experience serves him well here with a series of underwater cave sequences that almost raise the movie out of the mire, but screenwriter Michael Ross (editor of "Wrong Turn") makes mince of his villain's political motivations and serves up a hoary old urban legend as the meat of his story. As the stunned six begin to unwind with (spiked) cocktails, dancing Brazilians and overly willing native beauties, their gorgeous and friendly bartender makes a phone call to a doctor to advise him of the latest gringo count. This is a doctor who is ostensibly concerned about the health of his country's poor, but not so concerned that he hesitates to gouge out the eye of a questioning flunky with a skewer, right in front of one of those needy kids. Back on the beach, overly naive Kiko (Agles Steib), that doctor's nephew, is sidling up to Alex and Bea to hone his English. One by one, the visitors pass out on the sand only to awaken with horrible hangovers. They've also been robbed of any luggage, money and passports they were carrying. When they make their way into town, they discover the natives are extremely hostile and happen to be sporting some of their attire. Along comes Kiko to save the day, telling them that his uncle has a house in the jungle where they'll be safe. Right. "Turistas" is the type of film whose characters use little sense to get themselves into extremely hot water. Only the 'name' of the cast, Duhamel, shows any inclination to question some dubious situations. Suspense is replaced with exploitative gore effects. Stockwell creates some interest with his suspicious villagers (shades of "Hostel") only to squander it in the jungle. Since the smash success of the Christmastime release of "Scream" in 1996, it has become something of a holiday tradition to have a horror film in the theaters in December, but that tradition has never been as poorly honored as this year. Last year, "Wolf Creek" offered some nasty business based on Australia's backpacker murders which featured its locale as a big part of the threat. All "Turistas" does for Brazil is insult it.