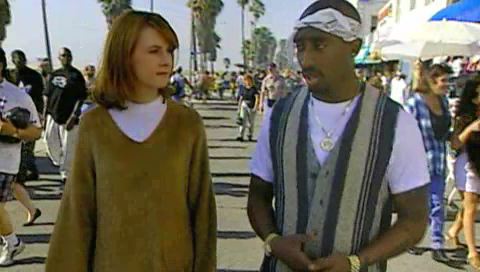 Director Lauren Lazin in collaboration with Afeni Shakur presents the life and death of the best selling rap artist of all time entirely in his own words in what is truly "Tupac: Resurrection."

'I've been shot' a voice says over footage of a new dawn. Could that be Tupac? Well yes, because he's referring to his first shooting, where he survived five bullets in a mugging he believed was suspect. The controversial and charismatic rapper was not shy of the interview process allowing Lazin and her editor, Richard Calderon ("Backstage") to recreate his life entirely in his own words. Even so, Lazin gives us a balanced perspective in her unique documentary work. Tupac explains early on that he was 'different things to different people,' some thinking he was a thug or a gangsta, others a poet and leader, then Lazin goes on to show us both sides of the man. He was brought up by a mother who was a Black Panther activist who was jailed while she was pregnant and a stepfather who was a street criminal. When Afeni moved the family from New York City to Baltimore, Tupac enrolled in the Baltimore School of the Performing Arts, where he was exposed to all types of influences (Tupac is pictured ballet gear set to 80's British songbird Kate Bush's "Wuthering Heights!") and met lifelong friend and soul mate Jada Pinkett. When his beloved mother fell into crack addiction when Tupac was 17, though, he became homeless, supported by pimps and drug dealers after he proved an incompetent street dealer. Tupac raged at the poverty he grew up in and as he grew older and moved around the country he saw this as a condition of his people. Smartly, he recognized that it was constant media coverage of the horrors of Vietnam that helped bring about the end of that war and he was determined to draw the same attention to Black poverty through his art. Unwise, perhaps, was his decision to name his movement Thug Life, forever associating himself with gangstas. As Tupac defines a thug as an underdog, Lazin shows a dictionary definition which clearly flies in the face of Tupac's words. Tupac's move to L.A. and association with Suge Knight's Deathrow records also caused a rift with former East Coast buddy Biggie Smalls (The Notorious B.I.G.) and producer Sean Combs (Puff Daddy) that would escalate into a war. Tupac's many interviews, particularly those with MTV interviewer Tabitha Soren, who seemed to enjoy a special relationship with the rapper, show him as an intelligent, impassioned and funny guy who admits to his own short fallings. 'I have a big mouth' he says after a clip is run where he lambastes the likes of Spike Lee and Eddie Murphy. He admits to loving women and going along with impromptu oral sex on a dance floor with a fan who later cried rape after coming to his hotel room with some associates of his. Tupac is so fierce in his defense we believe him, the man who both movingly sang about the plights of his 'sisters' and taunted the 'bitches' who try to take advantage. He's also hilarious describing filming "Higher Learning" with Janet Jackson. Outraged by the suggestion that he take an Aids test before filming a love scene with her, Shakur replies that he'll take four if he actually gets to make love with his costar. 'I didn't have a record til I made a record,' Tupac states ironically, having already admitted to pre-fame criminal activity. His first stint in jail was for resisting arrest after being stopped on a petty jaywalking charge. Tupac is outraged that the media focuses on his exit from jail, but not the injuries he sustained at the hands of police. Speaking with Soren after release from another prison term, Shakur is again highly entertaining, describing the horror of finding a hair in his jello. Soren's surprised that he would be upset by being called a 'nigger' by prison guards, as he uses the word in his own lyrics. He sets her straight. 'Niggers were the ones hanging from ropes. Niggaz are the ones with gold ropes hanging at clubs.' The filmmakers overstate their point towards the end of the film, where some of Tupac's closing words are set to shots of a Church interior and a crucified Christ, but they do a terrific job summing up the man's legacy with around-the-world shots of fans (including a white baby wearing a Tupac cap being held by its dad on the back of a pickup truck). Eerily, Tupac predicted his early death and left the words to describe it. You may disagree with Tupac's tactics or his words, but it would be difficult to come away from "Tupac: Resurrection" without some level of admiration for this complex artist.