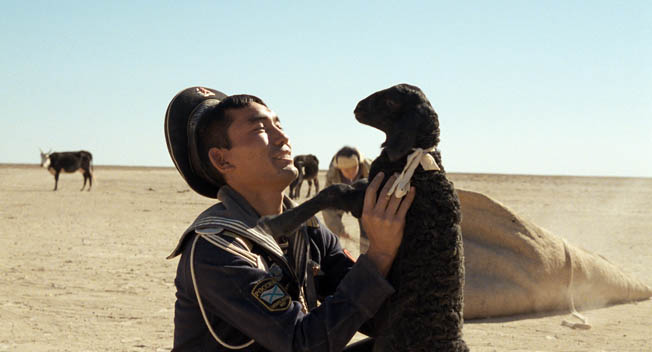 Asa (Askhat Kuchinchirekov) is back in his rural Kazakhstan village after serving a stint in the Russian navy. Now, he is ready to settle down and wants a wife, a sturdy yurt and a flock of goats to make life complete. However, local custom dictates he cannot have the latter two without the first. But bridal prospects are meager in the rustic land, so he turns his eye to the daughter of a local shepherd but is told his ears are to big by “Tulpan.”

Asa (Askhat Kuchencherekov) returns to his native land after a stint on the Pacific Fleet with his dreams drawn on the collar of his naval uniform. He dreams of a yurt and a farm, camels and sheep under the Kazakhstan sky, but in order to realize these dreams he must woo the only single woman available, "Tulpan." Movies about Kazakhstani and Mongolian nomadic herders who live in yurts have formed a genre of their own. It all began with "The Story of the Weeping Camel" which was followed by such films as "Mongolian Ping Pong," Camel's follow up "Cave of the Yellow Dog" and last year's equally courtship-centric "Tuya's Marriage." Cowriter/director Sergei Dvortsevoy maintains the quality level of these wonderful, often humorous stories of man and nature with Kazakhstan's 2009 Academy Awards submission (which many believed should have been one of the five nominees). It's funny watching Asa, surrounded by supportive male family members, trying to woo a woman who is unseen, closeted behind her guarding parents, with tales of the sea. For all his yearning for a traditional life, Asa clearly has little experience with it. But that is not why Tulpan rejects him. She 'does not like him,' as her parents relay, because of his rather conspicuous ears. There is a second attempt at woo where his sidekick Boni compares him to Prince Charles, but Tulpan still resists. Asa's brother-in-law Ondas will not give him a flock without a lamb and so he persists, attempting to speak to Tulpan directly, but still he cannot win her. He does win over us, though, in this charming and beautiful film. Even after seeing the everyday life in a yurt in films before, it seems to be endlessly fascinating. There is comedy in family (Ondas raises his head from his bed to be greeted by the peeing of his little boy) and drama (Asa's sister is caught between her husband and love for her brother) and Dvortsevoy adds to the intrigue by never showing us any more of Tulpan than the back of her head or her fleeing figure ('God, is she beautiful,' says an awe struck Asa when he finally sees what we're denied). Man makes his mark on nature even in this desolate place, most humorously with the sight of a camel in the homemade sidecar rigged to a motorcycle. There are two prominent scenes of lambing, the first utterly tragic, the second joyously life (and dream) affirming. "Tulpan" exemplifies what movies should do - transport us to another world. That it keeps us so rapt in a place few experience is a testament to Dvortsevoy and his cast and crew's craft.

This is another example of the quality of the films that continue to come out of the East Asian steppes and its tiny filmmaking industries. “Tulpan” brings to life a tough, rugged culture whose existence is steeped in tradition and bound to the harsh land. Writer-director Sergei Dvortsevoy, with co-scribe Gennadi Ostrovsky, tells a simple tale that harkens to past ways not familiar to Westerners. Dvortsevoy delivers a slice of Kazak life where the simple desire for family and flock is the driving force that pushes Asa in his mission to be wed to the titular character, whose face is never seen and only glimpsed from behind. Tulpan’s rejection of the hopeful suitor causes a split in the tiny village and people start taking sides, some favoring Asa, others Tulpan. This teeny tempest is fascinating to watch, as is the depiction of the hard life of the locals. Beside the high drama is a thoughtful sidebar that involves the unexplained deaths of the newborn baby goats and the impact that this tragedy can have on the fragile economic structure of the remote place. Techs are well done and belie the film’s miniscule budget. Lenser Jolanta Dylewska shows the beauty of this unforgiving locale (but it does not make me itch to visit the place). The minimalist acting by “Tulpan’s” novice cast helps to give the film an organic, realistic feel.