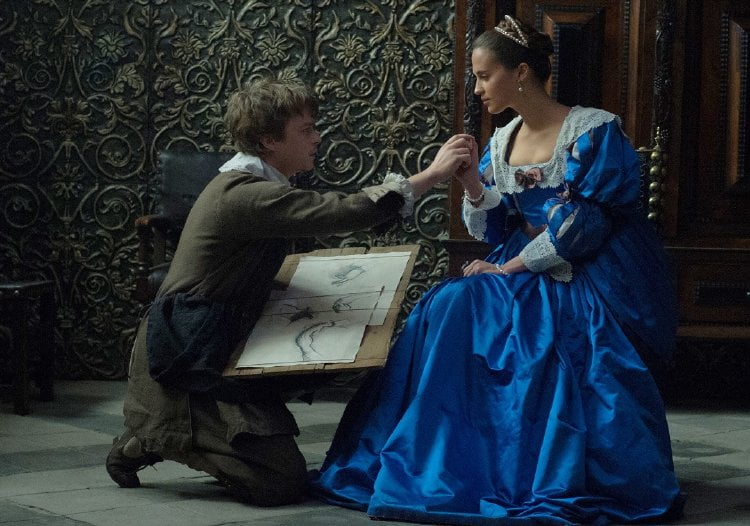 In 1631 Amsterdam, Sophia (Alicia Vikander) leaves a convent orphanage to marry wealthy spice trader Cornelis Sandvoort (Christoph Waltz) in an arrangement that will see her siblings sent across the Atlantic for a new life with a relative. The older widower is desperate for a child, but after three years they still live alone with their housemaid Maria (Holliday Grainger, "Their Finest Hours," who also narrates), a friend to her young mistress. Sophia is content, but when Cornelis hires Jan Van Loos (Dane DeHaan) to paint their portrait, passions flair in "Tulip Fever."

The Weinstein Company has had this lush period production starring three Oscar winners kicking around for three years before finally releasing it on a wide open Labor Day weekend - what could possible be wrong? As it turns out, not quite as much as I'd expected. There is a decent enough movie in here somewhere, but without knowing what director Justin Chadwick's "Mandela: Long Walk to Freedom" editor Rick Russell had to work with, it's difficult to know whether the script by the novel's author Deborah Moggach (2005's "Pride & Prejudice") and Tom Stoppard ("Shakespeare in Love") needed streamlining or the movie itself a longer running time. The film threads three differing love stories through Amsterdam's 17th century tulip mania which became the first model for futures trading in a market which eventually crashed. There is the passionless yet affectionate marriage of Sophia and Cornelis, the sweetly sexy romance of Maria and fishmonger Willem Brok (an appealing Jack O'Connell, "Unbroken") and the adulterous affair between Sophia and Jan which impacts the other two. There is also an inconvenient pregnancy covered up in an elaborate scheme, a no nonsense Abbess (Judi Dench) involved in the tulip trade, an unscrupulous 'baby doctor' ("In the Loop's" Tom Hollander, a standout), a thieving prostitute (Cara Delevingne, "Valerian and the City of a Thousand Planets"), an art collector (Kevin McKidd, "Trainspotting") and a foolish, tippling manservant (Zach Galifianakis), too many subplots for a 107 minute running time. We've hardly had any indication Sophia returns Jan's infatuation before she's in his bed. Similarly, we have little idea of her regard for Cornelis until she's wracked with guilt. "Tulip Fever" barrels along jumping from the Sandvoort home to Amsterdam's markets to St. Ursula's Convent to the frenzied underground tulip trade to a painter's garret at such breathtaking speed, by the time Jan's friend Mattheus ('Glee's' Matthew Morrison) is fished out of a canal we barely knew who he was. It's all quite beautiful to look at. Vikander is stunning, DeHaan (who needs to arm wrestle Tilda Swinton should a Bowie biopic come to pass) impishly handsome. The film's production (designed by Simon Elliott, "The Book Thief") is impressive, all achieved on sets built in England. Director of Photography Eigil Bryld ("In Bruges") uses natural light for the realistically dark, rich interiors of the Dutch masters. Michael O'Connor's ("The Duchess") striking costuming effectively covers a wide range of characters in different walks of life. But there's more fever than tulips in this tale, its overstuffed seams spilling coherence. What could have been the cinematic equivalent of literary fiction instead has been rendered bodice ripping romance. Grade: C Robin: Robin gives "Tulip Fever" a