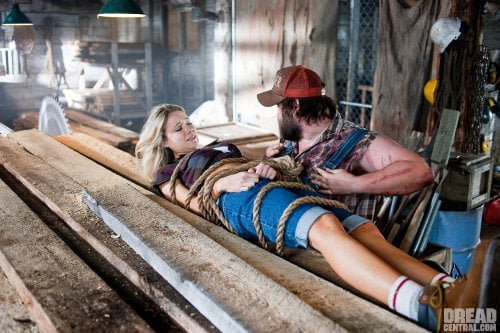 On their way to a new vacation home in the Appalachians, two good old boys stop at the Last Chance Gas Station where one becomes besotted with a gorgeous blond college girl. Encouraged to talk to her, he meets with prejudiced horror. Later that night while fishing, they have chance to rescue that same girl from drowning, but her friends view it as something else in the escalating war that is "Tucker & Dale vs. Evil."

Producer Morgan Jurgenson had an idea, one which he brought to his college buddy Eli Craig to flesh out. Years later, Craig makes his feature directorial debut with a horror spoof that turns the murderous hillbilly genre inside out while poking fun at movies like "The Blair Witch Project," "Cabin Fever," "Friday the 13th," "Blue Velvet," "Fargo" and the granddaddy of them all, "The Texas Chainsaw Massacre." It's a clever idea, but while the film's yucks are mixed with R-rated gore, the movie eventually runs out of steam, its themes not explored and satirized quite as well as they could have been. After a found footage prologue, we meet our boys on the road in their pickup truck. Tucker (Alan Tudyk, "Serenity," "Transformers: Dark of the Moon") can't wait to get to his new cabin in the woods with his bear of a buddy Dale (Tyler Labine, "Rise of the Planet of the Apes"), but when they're pulled over by the local Sheriff (Philip Granger), they're informed that up at Morris Lake 'There's nothing up there but pain and suffering like you can't imagine.' Meanwhile, a group of six college kids are headed in the same direction, with loud mouthed Chad (Jesse Moss, "Final Destination 3," "The Uninvited") clearly the group leader. When they pass Tucker & Dale, loud ominous music makes them appear like demented killers. That idea is furthered when Dale tries to talk to Allison (Katrina Bowden, "Sex Drive," TV's '30 Rock') holding a large scythe and cemented when the gang see the duo loading her body into their fishing boat later that night. The next morning, Allison comes to and quickly comes to realize that these guys, particularly Dale, are real sweet, but her friends, bent on saving her, begin a violent campaign that begins a series of gory deaths. This is pretty funny stuff for quite some time, but around the film's midpoint it begins to repeat itself. There could have been more satire, a riff on the couple who leave the group to have sex, for example, left untapped. Chad's funny as a college guy getting off on lawlessness, so the addition of a final act back story is not only unnecessary, it sucks some air out of the film. Still, the film's definitely worthwhile for the things it does get right. Tucker's vacation home turns out to be a fixer upper that looks like a long abandoned scout cabin, interior complete with bone mobiles and collage of newspaper articles on local murders. But our boys think it's a mansion and they have the power tools to transform it further, all the better for collegiate misinterpretation. Dale's idea of bliss is a 6 lb. jar pickled eggs, but he turns out to be smarter than he looks when he and Allison sit down to a game of trivia. Labine's charming in the role and the film's made better by the routing interest we have in his getting the girl. For every unfortunate cat that's been threatened in horror films, we have Dale's dog Jangers (Weezer), a massive one-eyed slobberer. The guys behind the recent, awful "Creature" may have had Sid Haig, but they could have learned a lot more from Eli Craig. It's surprising how much the films parallel each other in their setups. But "Tucker & Dale vs. Evil" is intended to have us laughing and, for the most part, it does what it set out to do.

The mean streets of the Soweto ghetto in Johannesberg are the home for small time gang leader, Tsotsi (Presley Chweneyagae), and his posse of thugs. They are utterly ruthless, taking life indiscriminately, but there is trouble when one of his minions questions the morality of what they do. Tsotsi’s ultra violent response to this questioning of his authority sends him to the streets that bore and raised him. He seizes the opportunity to hijack a car in an affluent neighborhood, shooting the lady driver in the process. But, he soon learns that there is a three-month old baby in the car, triggering long dormant emotions in the violent teenager in “Tsotsi.” Tsotsi means “thug” in the language of the Soweto streets and the title character is just that. 19-year old Tsotsi was orphaned at an early age and lived a near feral existence in the Johannesberg ghetto. Now he’s the boss of his own gang of thugs - Boston (Mothusi Magano), Butcher (Zenzo Ngqobe) and Aap (Kenneth Nkosi) – and they commit the violent crimes that will make them underworld pros. But, Boston’s protest over one particularly heinous killing show there are chinks in Tsotsi’s control of the gang. He brutally beats his loyal lieutenant for the infraction. Tsotsi’s inevitable criminal lifestyle hits a crossroad when he hijacks the car containing the baby. The shock of the find almost makes him flee but something deep inside makes him pack the three-month old child into a shopping bag and disappear into the night. He takes the tyke to his hovel in Soweto town and makes the decision to take care of the baby by himself. But, this seemingly easy task soon proves too huge a responsibility for Tsotsi. He spies a young mother in the water line and tracks her home, forcing her at knifepoint to feed his baby. Between the child and the young woman, a catalyst of change takes place in the mind and heart of the young man. Tsotsi” is both a film about the violent gang subculture in Johannesberg and one of redemption for its title character. The aggressive, even cruel, lifestyle that is Tsotsi’s is tempered when the tiny baby enters his life. The young man sees anew his own sad life of being orphaned at a young age and being forced to grow up, out of control, on the ghetto streets. There is caring and, even, love for the stolen child though Tsotsi lacks parental skills and must seek the help, especially her milk, from Miriam (Terry Pheto). This semblance of stable familial life is a first for Tsotsi and a change for the better may be in store for the young man. New-to-these-shores director/scripter, South African Gavin Hood, does a wonderful job adapting the novel by Athol Fugard, bringing to real life the story of Tsotsi. The simple tale of redemption is uniquely told and first time screen actor Presley Chweneyagae, in the title role, has genuine presence. The small supporting cast doesn’t get much screen time but do well enough fleshing out their characters, from the members of Tsosti’s gang to kindhearted Miriam. The baby’s mother and father, played by Nambitha Mpumlwana and Rapulana Seiphemo, ring true in their brief time on screen. Lenser Lance Gewer captures the poverty and desolation of the Johannesberg ghetto and brings a crisp look to the film. Production designer Emilia Roux also depicts the tough life of Soweto town that consists of struggling to exist and not much more. This is particularly effective when the filmmakers show the other orphans, just little children, and the tough life they live, in all kinds of weather, in sections of stacked sewer pipes. Some might not call this even existing. Tsotsi is one of the Academy Award nominees for this year’s best foreign language film. But, with so many incredible contenders for the Oscar, it’s a real horse race. Such a dilemma for film fans – having to see such terrific movies like this, “Sophie Scholl” and Fateless.”