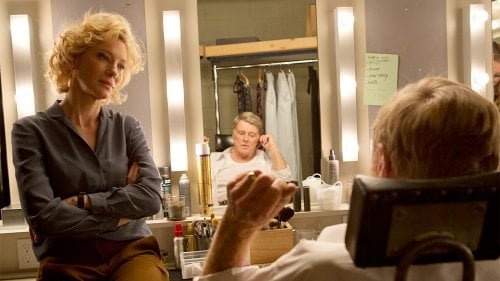 On 8 September 2004, “60 Minutes” newsman Dan Rather broke the story on President George W. Bush’s military record in the Texas Air National Guard in 1973. The evidence of young Bush’s infractions and avoidances seemed iron clad. But, even as the broadcast aired, documents deemed authentic were proved to be possible forgeries. What should have brought down the president’s reelection campaign brought down, instead, an American news icon in “Truth.”

Although she was aware of George W. Bush's questionable Texas Air National Guard record before the 2000 election, '60 Minutes' producer Mary Mapes (Cate Blanchett) was too distraught over the death of her mother to go after the story. With his 2004 Democratic rival John Kerry's Vietnam War record being questioned in Republican attack ads, Mapes was determined to bring the potentially election-changing Bush story to light, but suspicious documents used in her and Dan Rather's (Robert Redford) coverage proved their undoing, despite their reporting's essential "Truth." In adapting Mary Mapes' book, writer/director James Vanderbilt (producer/writer "Zodiac") charts all the ins and outs of nailing down a politically explosive news investigation. One comes away from the film that by its very title suggests Vanderbilt wishes to change the perception of the '60 Minutes' reporting, which was accurate (unlike the 'swiftboating' Kerry endured) even if a set of documents used to support it were never proved authentic. Yet Mapes is pictured as a somewhat rash, politically motivated professional with daddy issues intent on proving herself, a portrayal which hamstrings that goal. Still, this is a well made movie about behind the scenes investigative reporting, a slippery slope when many necessary sources have political agendas and where smokescreens of minutae can obscure essential truths. The film also waxes nostalgic, via Rather, for the days when news divisions were established for the public good rather than their profit margin. The film showcases a hard working team triumphant in their belief that they've scored a major scoop, only to have the whole thing turn to quicksand beneath their feet. In the aftermath, Mapes and her team are required to face an in house investigative panel chaired by Bush's former Attorney General. Mapes was fired and Rather stepped down. Ironically Mapes later won a Peabody award for her work on Abu Ghraib. Blanchett is terrific as Mapes, high strung and eager to please the paternal Rather. When Mapes talks about her own father, we learn about a harsh disciplinarian who discouraged speaking one's own mind and Blanchett showcases Mapes' lowest point with a pitiful phone capitulation to her dad. Redford encompasses the newsman America trusted calm and steadfast, loyal to Mary through the worst. The cast also includes a smooth Bruce Greenwood as CBS news head Andrew Heyward, Topher Grace as passionate reporter Mike Smith, Dennis Quaid as the team's affable Lt. Colonel Roger Charles, Elisabeth Moss as researcher Lucy Scott, John Benjamin Hickey as Mary's husband Mark and Stacy Keach as Lt. Colonel Bill Burkett, the man who provided the document copies under false pretenses. "Truth" tells a maddening story, but Vanderbilt fails to entirely make his case. Grade:

Screenwriter turned first time director/writer James Vanderbilt adapts former “60 Minutes” producer Mary Mapes’s book, Truth and Duty: The Press, the President and the Privilege of Power, on her account of events that blew up in the face of CBS News and cost top level writers and producers, and Dan Rather, their careers in television journalism. Cate Blanchett plays segment producer Mary Mapes who had pursued the investigation of the Bush military record since 2000. Mapes brings to light certain documents by Bush’s commanding officer in the TexANG that show the future president was admitted to the National Guard to help him avoid duty in Vietnam. This breaking story was planned to come out on the eve of the president’s reelection in 2004, making the political intent of the expose appear to be a case of axe grinding by CBS News. Although there was a preponderance of documentation regarding the president’s former military record, it was a mere four documents, copies of the alleged originals, which were the subject of the 2004 news story. What ensued before and after that controversial broadcast ended in an independent investigative panel that refuted the “60 Minutes” news team claims of authenticity of the documents in question. “Truth” is an earnest telling of the September 2004 through the eyes of Mary Mapes. Her motivations were pure but her intentions not quite so and likely politically, rather than ethically, motivated. The decisions made to report the “news” were deemed overzealous and violated the journalistic tenet that acceptable journalistic standards must be followed. Ultimately, the report cost the careers of those involved. It is an eye-opening story that left me with a bunch of moral questions.