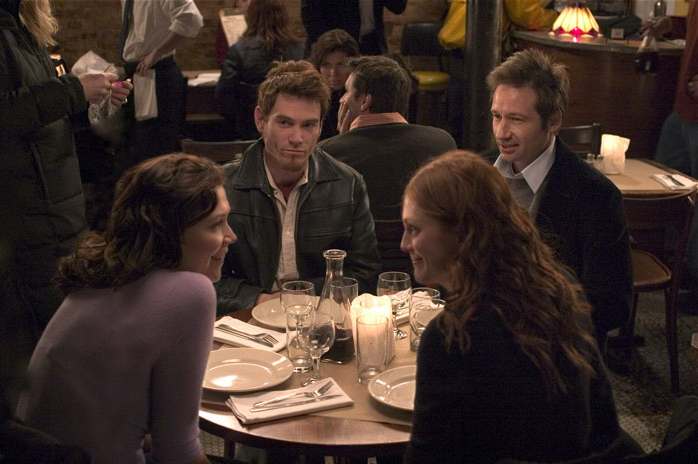 Rebecca (Julianne Moore) and Tom (David Duchovny) outwardly seem to have an idyllic life. She is a successful actress on a career fast track and he, by choice, is her stay-at-home husband who appears to be happy taking care of their kids and household. Rebecca’s brother, Tobey (Billy Crudup), and his longtime girlfriend, Elaine (Maggie Gyllenhaal) have reached an impasse in their relationship: she wants to marry and have a family while he is perfectly happy with the status quo. We follow the lives of these two dysfunctional couples in “Trust the Man.”

There is a lot I don’t understand about “Trust the Man,” especially its title. What Man? But, the big question I have is: why are these couples together in the first place? There is virtually no chemistry between the principals in this satire wannabe and the story, by writer/director Bert Freundlich, rings contrived and thoroughly artificial. By the time things wrap up, I found I didn’t care a thing about what happened to any of these characters. Julianne Moore has taken a step or two back since her outstanding performances in “Far from Heaven,” “The Hours” and, even, “The Prizewinner of Defiance, Ohio.” She is hampered by the silly screenplay of “Trust the Man” and gives a shallow performance akin to her roles in “Laws of Attraction” and, most recently, Freedomland.” She isn’t helped by the wooden performance by David Duchovny whose Tom is not a very likable person. Maggie Gyllenhaal, too, is hampered by the trite script and fails to evince any sympathy from me, the viewer. Billy Crudup, who bowled me over with his stellar performance in “Stage Beauty,” only channels Jack Black as the ne’er-do-well Tobey. There isn’t a likable performance in the bunch. This is not helped by the stranded supporting cast that includes Gary Shandling, Bob Balaban and Ellen Berkin. Only Eva Mendes, as Tom’s past paramour who comes back on the scene, is able to garner any character as home wrecker, Faith. Repeated fart joke, choking incidents and unbelievable plot turns make “Trust the Man” more farce than satire. Maybe less reliance on cheap laughs and more dimension to the characters would have helped but I doubt it. This is the kind of film that is a rip-off for the movie house audience and should have gone direct to DVD. I wasted 103 minutes of my life watching it.