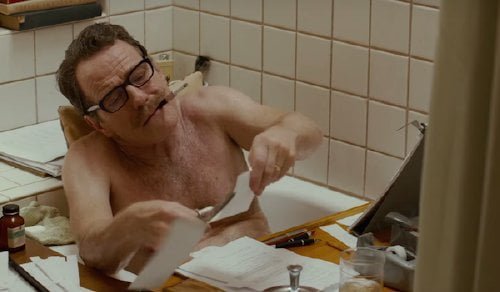 By 1947, Dalton Trumbo (Brian Cranston) was one of the most successful and highest paid screenwriters in Hollywood. In 1943, the radical writer joined the Communist Party and, four years later, was called before the House Un-American Activities Committee where he pleaded the Fifth Amendment. This defiance landed him in jail, along with the other members of the Hollywood Ten. His story of survival and moral right is told in “Trumbo.”

In the late 30's and early 40's, the screenwriter of "Five Came Back" and "Kitty Foyle" was a member of the communist party, not in alliance with Russia, but in support of American Labor Unions and civil rights. When HUAC sprung up and targeted Hollywood, the Hollywood Ten were jailed for contempt of Congress while their colleagues named names to save their careers. The most famous of this group was Dalton "Trumbo." There have been other feature films about the Hollywood blacklist, like Martin Ritt's "The Front," the Robert De Niro starrer "Guilty by Suspicion" and Frank Darabont's "The Majestic," but "Trumbo" is the first to feature (mostly) real people. On paper, director Jay Roach ("Meet the Fockers," "The Campaign"), with a filmography mixing comedy and politics, would appear a good fit for the material given Trumbo's outsized persona. But the resulting film, entertaining throughout its highly necessary reminder of the cost of denying basic American rights, isn't consistent in its depictions of familiar faces, often resembling a parade of caricatures. As Trumbo, 'Breaking Bad's' Bryan Cranston works hard to get the man's speech and mannerisms but the effort shows, the actor never fully disappearing into character however entertaining he may be. When Trumbo signed a contract with Louis B. Mayer (Richard Portnow, "Se7en") he became highest paid screenwriter in Hollywood. But it wasn't long after that that Trumbo began to call meetings at his ranch to discuss the industry's reaction to the Red Scare. A composite character, Arlen Hird (Louis C.K.), representing five other soon-to-be-blacklisted writers, calls Trumbo out on his paradox - 'you talk like a radical but you live like a rich guy.' Trumbo offers to float Hird financially should the two lose their livelihoods. The sympathetic Edward G. Robinson (Michael Stuhlbarg, "A Serious Man") sells a Van Gogh to support their cause, but his public face eventually plunges him into a moral quagmire. Powerful gossip columnist Hedda Hopper (Helen Mirren) goes after everyone showing the palest shade of pink, threatening Mayer, reserving the most potent poison of her pen for Trumbo. Roach very successfully integrates archival footage of the HUAC hearings, cutting to his star in a black and white which gradually turns to color as Cranston delivers Trumbo's rousing, Patriotic words. Screenwriter John McNamara used Bruce Cook's biography (although time lines appear a bit muddled), but also had access to Trumbo's daughters Niki (played from 13 on by Elle Fanning) and Mitzi (Trumbo's son Chris died in 2011), which great influenced how Trumbo's home life is shown. The loving family held together by former child performer Cleo (Diane Lane) is put under great strain once Trumbo's released from prison, having to move to a new, unwelcoming neighborhood and put up with a father whose workload increases dramatically when he can no longer put his name to scripts. In addition to using friend Ian McLellan Hunter (Alan Tudyk) as a front (Hunter won the Oscar for Trumbo's "Roman Holiday" script), Trumbo goes to work for the King Brothers, Frank (John Goodman) and Hymie (Stephen Root) favoring quantity over quality, spreading the 'wealth' among his blacklisted buddies. At home, he shuts himself in his office or the bathroom, the tub being a favored work spot, guzzling booze and pills, using his wife and kids to answer a bank of phones and deliver scripts. Niki eventually rebels. But the blacklist eventually is broken, two men, producer/actor Kirk Douglas (Dean O'Gorman, "The Hobbit" trilogy's Fili) and director Otto Preminger (Christian Berkel, "Inglourious Basterds"), daring to put Trumbo's name back on the screen. Roach covers a lot of ground using representational characters to define the ramifications of the blacklist. Hopper's power reached a pinnacle, supported by the likes of John Wayne (David James Elliott). Stuhlbarg evokes sympathy for Robinson even when Trumbo offers him none. As producer Buddy Ross, Roger Bart ("Hostel Part II") exhibits two-faced opportunism. Louis C.K. is perhaps the most representational of those affected, the actor cracking wise and witty trudging a tragic course. Mirren spits venom, making the blacklist her own personal vendetta. Root and especially Goodman are hilarious as the carny-like showmen who unwittingly win an Oscar (the King brothers deserve their own movie spinoff). O'Gorman looks the most like his real life character and he and Berkel add some late levity, paving the way towards the triumphant finale. Lane is rock solid as the supportive wife while Fanning fuels the family's frustrations. Cranston, though, keeps Trumbo, except in a few one-on-one scenes with his daughter, a little too larger than life. Perhaps his recent theater turn as LBJ has him conditioned to play to the rafters, his Trumbo, flamboyantly outfitted waving that signature cigarette holder about, seemingly cut from similar albeit more civilized cloth as Hunter S. Thompson. Grade:

I have always had a fascination for the whole HUAC Red witch hunt of the 1940s and 50s, the persecution of members of the entertainment industry far beyond Hollywood and Joe McCarthy and his brand of political bullying. Of the Hollywood 10 (and there would be many more added to the list), Dalton Trumbo was possibly the most famous of the artists indicted for contempt of Congress in 1947. Director Jay Roach and first time feature scribe, TV writer John McNamara, adapt Bruce Cook’s 1977 biography, Dalton Trumbo, and the attention to the details of Trumbo life is handled with an accurate history of the man and his mission – to NOT name names and keep his honor and integrity. The film also shows the impact of the Black List at a personal level, through the eyes of his loyal wife, Cleo (Diane Lane), and rebellious daughter, Nicola (Elle Fanning, as teenage Niki), and her siblings. “Trumbo” accurately portrays the events of the time, particularly the lengths Trumbo and other Hollywood prominent figures, like composer Dimitri Tiomkin, went through to keep working, pay the bills and feed their families. Trumbo, a renowned workaholic writer, fared better than most and continued working during the Blacklist years, though denied credit and recognition for two Academy Award winning screenplays “Roman Holiday (1954)” and “The Brave One (1957).” (Trumbo eventually did receive credit for his contribution of the scripts for both films.) Jay Roach is best known for his comedies (the “Austin Powers” franchise and “Meet the Parents” and its sequel), so he seems an odd choice for this historically-based account of a great blemish on modern American history. The filmmakers do a yeoman’s job in telling Trumbo’s and others’ stories of life under the Blacklist. Bryan Cranston captures the quirks and characteristics of the man but, unfortunately, does not give Trumbo real dimension as a person. This is true, also, of the supporting cast who are symbolic characters rather than people. As such, there is a sterile quality to “Trumbo.” Do not get me wrong, though. “Trumbo” works in telling not just of his life during that turbulent time but, also, the life of an America that was ripped apart by the Red Scare. To quote Trumbo: “There was bad faith and good, honesty and dishonesty, courage and cowardice, selflessness and opportunism, wisdom and stupidity, good and bad on both sides. (“A Voice from the Blacklist: Documentary Lets Dalton Trumbo Speak (Through Surrogates)”).” “Trumbo” is a fitting film for our times where religious and political persecution and fear still litter the landscapes of the world.