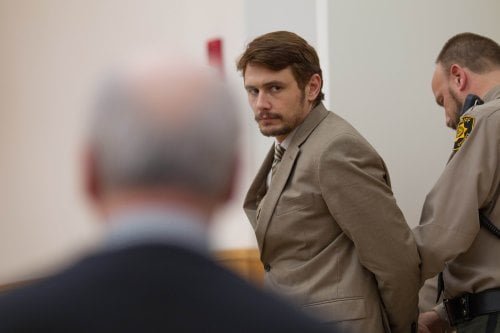 Mike Finkel (Jonah Hill) was an up and coming reporter at the New York Times, until a major story he wrote is found full of errors and fabrications, costing him his career. Out of a job and at loose ends, he gets a phone call from a reporter (Ethan Suplee) for the Oregonian about an FBI Most Wanted fugitive, now behind bars, who had been using his name, Finkel sees a story that will get him back in the journo game and he travels across country to see the man, Christian Longo (James Franco). Mike wants to get the truth about the accused murderer and tell his “True Story.”

While watching “True Story,” I kept flashing to the 1967 classic, “In Cold Blood.” The parallels between to two films are several, at least to me, including a writer going to a man accused of murder in a most heinous manner and planning a book of the crime. Given that, newcomer to feature films, Rupert Goold, who wrote the screenplay, adapting Mike Finkel’s memoir, does a fair though uninspired job telling the tale of two men’s separate ambitions – one obvious, the other not. The problem I have with “True Story” is I never developed any sympathy for the two key players. Felicity Jones, as Finkel’s wife Jill, on the other hand, garners empathy as she watches her husband’s collaboration with Longo, a man she considers evil incarnate, and cannot stop it. The actress develops Jill’s character in just a few brief scenes. There is a cat and mouse element to the film between Finkel and Longo as each uses the other for ambiguous gains. It is unclear, to me, just what the convicted murderer will get out of his collaboration with the disenfranchised reporter. Finkel, on the other hand, is more obvious in his desire to get his good reputation back. But, in the end, I found I did not care for, maybe even loath, either man. That is quite a bit different reaction than I had with “In Cold Blood.”