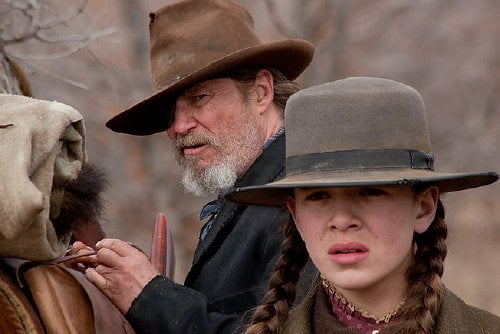 14-year old Mattie Ross (newcomer Hailee Steinfeld) is out for revenge. Her father was murdered in cold blood by hired hand Tom Chaney (Josh Brolin) and she wants him arrested. She seeks out the toughest US Marshal she can find and selects Rueben J. “Rooster” Cogburn (Jess Bridges), a hard drinking, slovenly one-eyed lawman who Mattie decides has “True Grit.”

When her father is murdered by Tom Chaney (Josh Brolin, "No Country for Old Men," "You Will Meet a Tall Dark Stranger"), a vagabond he'd tried to help, fourteen year-old Mattie Ross (newcomer Hailee Steinfeld) travels to collect his body, but sends the family farmhand back alone. She hasn't told her mother, but she intends to avenge her dad by hunting down Chaney with a lawman she has heard has "True Grit." Writer/director/editors Joel & Ethan Coen ("No Country For Old Men," "A Serious Man") adapting the Charles Portis novel more specifically than remaking the 1969 John Wayne film (which was more faithful to the novel than the Coens give it credit for), have made a good old fashioned Western which lives more naturally in its time and place than Henry Hathaway's glossy production. Most importantly, the Coens' film makes it far more clear that the true grit in question belongs to Mattie (and her horse Little Blackie!), largely due to their discovery's formidable, clear-eyed acting talent. The Coens do not establish the Ross family farm the way Hathaway did. Instead they cut to the chase, with Mattie narrating the story of her father's death and Chaney's duplicity as we watch the murderer ride away in the dark leaving the dying man crumpled in the street. Mattie's character - her head for business, her unsentimentality, her rootedness and forthrightness - are immediately established in her dealings with the Undertaker (Jarlath Conroy, "Day of the Dead"). Meanwhile we meet Rooster Cogburn (Jeff Bridges) in a courthouse (brilliantly lit and suffused with dust motes by cinematographer Roger Deakins) where his trigger happy methods are being questioned by a judge (he reckons he's killed 12-15 in four years, then 'fesses up to 24). Most amusingly, Mattie first approaches Rooster as he spends considerable time in an outhouse. Texas Ranger LaBoeuf (Matt Damon) shows up at her lodging house sickbed to trade insults and try to weasel his way into Mattie's plans as he's after the same guy for the shooting of a Senator in his home state. Rooster accepts her job but tells her flat out she ain't coming along. Mattie makes a head-spinning deal to get back a pony her dad had sold and follows on Little Blackie. Before too long, she's earned the men's respect and by the end of their adventure, even love. Make no mistake about it - Steinfeld is the film's lead and this assured tweener carries the film. Jeff Bridges makes for a great Rooster - the man's hilarious drunkenly falling off his horse, awe-inspiring taking on four men in a galloping shootout. It's a more entertaining and individual performance than his Oscar winning one of last year. Damon, perhaps Hollywood's most dependable actor, keeps it real when he could have gone for laughs (and gets some anyway). The only disappointment is Brolin, no where near as threatening a Chaney as Jeff Corey was, more of a misguided misfit. Jarlath Conroy is a standout in a small role. While this update doesn't have the typical quirk of a Coens' production, it is some damn fine storytelling with a slightly subversive air captured from the novel. The Coens make the wise choice of including the book's coda with Elizabeth Marvel playing the 40-Year-Old Mattie as an eccentric spinster made by her own legend. It's an ironic and melancholy and parallel ending which underscores the deep bond between a young girl and an alcoholic Marshall. The production is a stunner, from maestro Deakins' photography to subtle makeup (those spider veins on Bridges's nose!) and lived in costume design by Mary Zophres ("A Serious Man"). Original music by Carter Burwell ("A Serious Man," "Howl"), hands down my favorite film composer, is less original than his work usually is, good but standard genre fare with echoes of 'Waltzing Matilda' weaving through. The Coen brothers may not have the legendary John Wayne, but their "True Grit" is more the telling of a legend.

I have always held a warm spot in my heart for the 1969 “True Grit,” starring John Wayne in his only Oscar-winning performance. I have been a fan of the Duke since I was a kid and enjoyed his performance as cranky Rooster Cogburn. Other things about that film, though, like 22-year old Kim Darby being cast as 14-year old Mattie Ross or Glen Campbell trying to pull off the tough guy persona of Texas Ranger La Boeuf, just do not work. The Coen brothers, Ethan and Joel, go back to the Charles Portis novel, rather than the 1969 film, as the source of inspiration for their adaptation of “True Grit.” They should call their rendition of the Mattie Ross revenge tale “True Grittier” as, where the Duke version smacked of Hollywood, their story is grounded in realism. Jeff Bridges is marvelous as one-eyed Rooster Cogburn. Everything about his character is more down and dirty than John Wayne’s and Bridges scores a bull’s eye with his performance. Matt Damon, too, gives a colorful and amusing performance as LaBoeuf. But, the real surprise is the star-turning performance by 14-year old unknown, until now that is, Hailee Steinfeld (how about that, a 14-year old playing a 14-year old). This young actress, out of nowhere, holds her own opposite veterans Bridges, Damon, Josh Brolin (as the vile Tom Chaney) and Barry Pepper (as Rooster’s foe Lucky Ned Pepper). The young newcomer gives a full, rich performance as the strong-willed adolescent who wants her father’s killer, dead or alive. Watch this kid. As we have come to expect from the Coen brothers, the production values are high, mainly due to their long-time contributors. Roger Deakins (cinematography), Carter Burwell (original music), Gonchor (production design), Nancy Haigh (set decoration) and Mary Zophres (costume design) have made multiple films with the brothers and it shows. The techs behind the camera function like a well-oiled machine as they make “True Grit” good to look at and good to listen to. One signature scene handled so well in the ’69 “TG,” when Rooster goes against four gunmen, all riding flat out, guns blazing, is just as beautifully handled by the Coens, with a bit more true grit. In the earlier rendition, the Duke was the star, period. Here, while Jeff Bridges is the star, it is as first among equals with his costars, especially Steinfeld. This helps give “True Grit” the feel of verisimilitude lacking in the earlier version. Anyone who has read the book, per the Coens, will get the true “True Grit.” That may be, but the new film stands on its own, anyway.