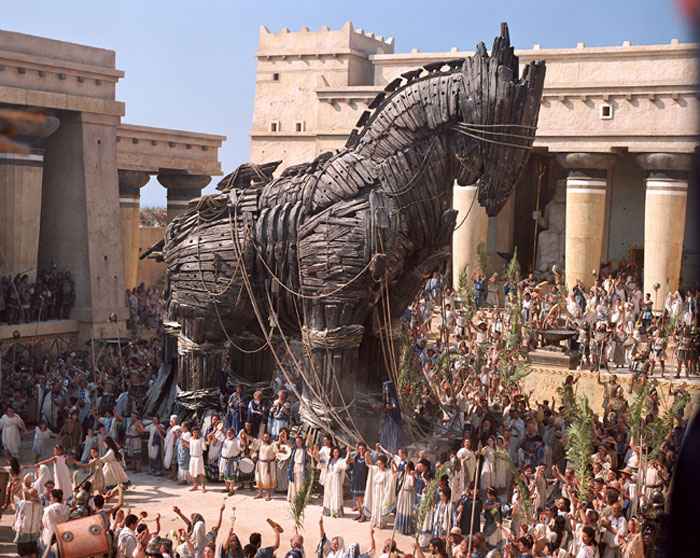 As Agamemnon (Brian Cox, "X2"), in a quest for power, unites the Greek states, his younger brother Menelaus (Brendan Gleeson, "Cold Mountain"), King of Sparta, entertains the two princes of Troy, Hector (Eric Bana, "Hulk") and Paris (Orlando Bloom, "Pirates of the Caribbean") in a bid for peace between the two nations. But when the Trojans set sail for home, Paris is accompanied by Menelaus's wife, Helen (Diane Kruger). The Spartan king wants revenge while Agamemnon sees an opportunity to expand his empire, so one thousand ships are launched to do battle with the kingdom of "Troy."

Screenwriter David Benioff ("25th Hour") strips Homer's epic poem down to the human tragedies wrought by battles fought for pride, greed and lust while director Wolfgang Petersen ("The Perfect Storm") and his cinematographer Roger Pratt ("Iris") fetishize their Achilles, Brad Pitt, with more gusto than they do the woman whose face launched all those boats. "Troy" presents the basics with visual flair, but except for Bana's Hector, the actors play their pageant with one note. If "Troy" has a central character, Pitt's Achilles is quickly established as the first among equals, when he quickly takes out the best and biggest Thessaly has to offer. Achilles despises Agamemnon, but he continues to fight for the Greeks to support friends like Odysseus (Sean Bean, "The Lord of the Rings: Return of the King") and for the historical significance desired by his mother Thetis (Julie Christie). Achilles is the first to land at Troy where he takes possession of Apollo's temple, slaughtering its high priests. Paris tries to make amends to his father by offering to end the battle by fighting Menelaus mano-a-mano, but he proves weak again and Hector steps in to save his brother's life. Achilles, angered by Agamemnon's motives (and lack of respect for his own importance), is determined to set sail for home, but when his cousin Patroclus (Garrett Hedlund) dons his armor and is slain by the deceived Hector, Achilles returns for revenge. Escalating personal agendas culminate when the Spartans gain entry into the walled kingdom of Troy disguised within the infamous Trojan horse. Initial glimpses of "Troy" were worrisome as its CGI effects seemed all too obvious, but the final product is quite handsome. The lengthy film moves along with rarely a dull moment, yet it should be noted that it skims along the surface, rarely diving for anything deeper than a little sadness shown by Achilles for the emptiness of his fate. Pitt's performance is all about action - he makes it absolutely believable that he could fell a giant of a man and he's positively graceful balancing sword and shield, but there's little to read in his perfect blue eyes. The German Petersen's choice of the blonde Pitt as the Greek warrior verges on an uncomfortable idolization of Aryan perfection. Bana is surprisingly good as Hector, showing the most completely rounded range of emotions. Fellow Aussie Rose Byrne ("City of Ghosts") is his female counterpart as Hector's cousin Briseis, who becomes the conflicted love interest of Achilles when she's captured by the Spartans. Cox is hammy fun as the villainous Agamemnon and Gleeson is physically imposing in his cuckolded rage. The great Peter O'Toole, however, is a disappointment, wafting about Troy making pronouncements about love and trusting in the gods like some kind of semi-demented new age guru. He does have one touching scene begging Achilles for the return of his son's body. Bloom bravely throws off his heroic "Pirates" mantle to portray a spoiled pretty boy. Saffron Burrows ("Frida") as Hector's wife Andromache and Kruger as the famous beauty are mostly decorative. At its best, "Troy" defines war as a tragic waste of many for reasons of absurd insignificance, but its stick figure reenactments brand it as a summer popcorn flick.