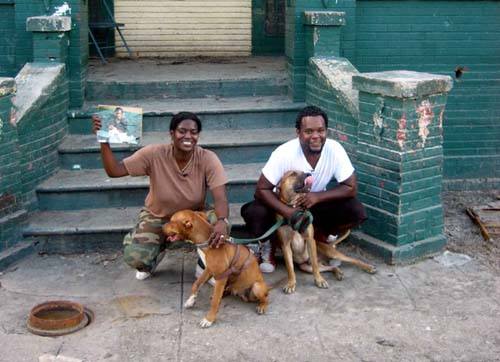 In August 2005 as Hurricane Katrina approached Kimberley Roberts hunkered down in her New Orleans home with her husband Scott Michael, their two dogs and cat because they didn't have enough money to get out. Armed with her faith and a videocamera, Kim documented events before, during and after the storm when. They were lucky to survive and equally blessed to meet up with documentarians Carl Deal and Tia Lessin who used the Roberts's story and video as the basis for their "Trouble the Water."

There have been many good documentaries about Katrina, from Spike Lee's all encompassing four hour plus "When the Levees Broke" to the filmmaker-centric "The Axe in the Attic," but "Trouble the Water" is the best of the bunch, a personal, ground's eye view told with outrage, humor, strength and song by the unforgettable Kimberley Roberts. Deal and Lessin use Kim's amateurishly shot but expertly narrated footage for dramatic emphasis, rounding out their story with news reports, press conferences and by trailing the couple as they rebound from the disaster. Kim introduces us to her household, where preparations include ice and charcoal, before striking out to patrol the streets before the storm hits. 'I'm showing the world that we did have a world,' she says, before rousing her drug addled uncle from someone's front steps. There aren't too many others about. When the storm hits, the Roberts and other family members must retreat to their attic, but soon we can see that the water level is reaching the windows. As we watch storm waters rising, Deal and Lessin play the cries for help going to 911 operators who can only tell them their will be no one to rescue them until the storm abates. Scott's brother arrives neck deep in water to help his family get to higher ground. Two weeks later, Deal and Lessin walk with Kim as she visits her old neighborhood. The SPCA has been to these houses, but the National Guard has not. She finds her uncle dead in his home. Miraculously, the Roberts are reunited with their two dogs (the cat's fate is not mentioned until later in the film, where it still isn't mentioned just presented, another symbol of the Roberts's self sufficient caring and strength). The horrors keep piling up though. Scott Michael goes to the Naval Base they were told to go to during the storm and relates that although its barracks and housing were largely deserted, they were met with guns to keep them off the property. Those soldiers were awarded medals for their efforts. Kim springs her brother Wink from jail and we hear how the prisoners were simply left to die with no food or water - 'the hardest men you saw on the street were crying for something to eat' he tells us. Kim's uncle tells of his mother in Memorial Hospital, an institution who told him patients were being evacuated. No one was. The Roberts procure a truck and begin evacuating people themselves. They settle in Tennessee, stunned by the Memphis neighborhoods of ranch homes and lawns that comprise a Black neighborhood. But eventually, they return to New Orleans. Commemorating the one year anniversary of Katrina on videotape on the streets, Kim is stopped by police for no reason and told to stop taping. In their zeal to condemn the U.S. Government's handling of the disaster, though, Deal and Lessin get a little one-sided with facts that could have stood more strongly had they challenged them. The statement 'most whites who left New Orleans returned whereas most Blacks did not' implies many things but does not provide statistics or circumstances. Their emphasis on funds available for rebuilding of the French Quarter as neighborhoods like the Roberts's sit in ruin does not address the jobs brought back with tourism. The filmmakers leave it to the viewer to deduce hidden agendas against New Orleans's poor Black population. The Roberts are good, solid Americans, the type of people you'd be lucky to have as neighbors, and we meet many others along their journey. Kim is an aspiring rap artist and she brings down the house performing with conviction while Scott Michael looks on in admiration. De rigueur closing credits give us updates, including that the couple have since formed Born Hustler Records. Other pieces of news are ironically heartbreaking and just plain sad..